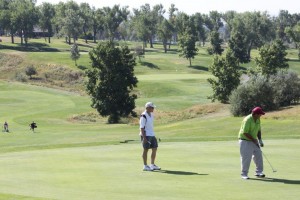 While golf might not be your first choice when planning a trip to Great Falls and North Central Montana, known in some circles as Russell Country, named for cowboy artist Charlie Russell,  I found on a recent trip that you do some have viable options to get out on the links if you find the time.

Getting there from Texas requires a stop in Salt Lake City. The Delta Connection flights on smaller aircraft were full. They are a little pricey, more than $500. The good news is that the green fees are very reasonable, ranging from $20 to $30, bargains in today’s times. Meals are as pricey as the ones in Texas, but the portions are equally huge, like an 18-ounce end cut prime rib that I could barely finish eating.

Our port of entry was Great Falls, named for a series of waterfalls on the Missouri River that generate hydro electrical power. The third largest city in the state has a pair of 18-hole public courses—Anaconda Hills Golf Course and Eagle Falls—that were on my 90-hole circuit with a pair of writers and our hostess Gayle Fisher. There’s also a private club, Meadowlark coun try Club, that I heard was “awesome” and worth playing if you know a member.

The front 9 at Anaconda Hills was built in the 1920s as a place for employees of the Anaconda Mining/Shelter Co and shows its age a little. It’s on the short side, especially for the par 4s that are drivable for long hitters, but does require accuracy with all the tall Cottonwoods bordering the fairways. A back pin placement on the par 9th even had the superintendent wondering who cut the cup there. The back 9, built in the early 1990s, was probably my favorite 9 of the trip. It traverses a rugged ravine with a great variety of interesting holes and larger greens than the ones on the front. We played with 83-year-old Mel Krebs, who plays nearly every day, bettering his age on a regular basis from the red tees.

Eagle Falls is a better overall test at 6,571 yards from the tips with some interesting holes where bunkers put the premium on accurate tee shots unless you are Ryan Fritz, a young long-hitting banker who could easily fly these hazards en route to a round in the mid-60. The sand in the bunkers was as good as I’ve seen on a muny and I was able to get up and down two of three times. Moving up a set of tees certainly make the last 12 holes of my round more enjoyable as I seemed to lose some distance with the steel-shafted rental clubs.

The Signal Point Golf Course in historic Fort Benton deserves its reputation as perhaps the hardest 9-hole layout in the state. The trees are strategically placed to affect stray tee shots as I quickly found out. The elevated greens put the premium on accurate approach shots; miss long or to the right or left and getting up and down is almost impossible, even for our local host, Bill Widaman, who plays there regularly.  Just a few yards off the course is a cemetery plus magnificent views of the Missouri River that used to carry river boats. 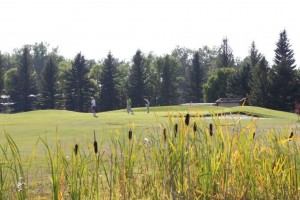 Two of the other 9-holers—Harvest Hills in Fairfield and Pondera Golf & Country Club in Conrad—are surrounded by grain fields, providing local golfers with places to enjoy the game rather than getting lots of visitors. For a flat course, I’m not sure how hills got into the Fairfield course’s name. The course was a labor of love for the local residents, taking almost four years to complete.  My only two birdies of the trip came on chip ins on the two par 5s at Pondera. I did have a run in with the Bull Winkle bush that guards the right side of a par 3. Both courses did have water hazards that came into play, adding to the challenges.

The Choteau Country Club is also a great place for the locals. Its 9 holes were built in 1929, but have been renovated twice in 1974 and 1997. With a shotgun start planned for Sunday morning, we played it in 75 minutes, practicing ready golf. One interesting feature was what has to play as one dogleg par 3 for some golfers, unless you can carry some tall trees.

The 18-hole Marias Valley Golf Course, built along the banks of the Marius River less than 30 minutes from the Canadian border in Shelby, was my favorite track. From the back tees at 6,784 yards, I’m sure it has to be on the Montana Golf Association annual schedule. We didn’t go all back there either. There were some interesting holes, including a 600-yard par 5 that I could not even reach with a driver and a pair of hybrids. You could hear the sounds of balls bouncing off the tree-lined fairways all over the course. As was the case at all the courses we played, the bent grass greens were very good. The young pro we played with seemed to be having a case of the yips, but didn’t want to listen to my advice to try the belly or long putter.

We had perfect golfing conditions on our September visit, cool mornings where a windbreaker might be needed and afternoons warming up to 80—a nice change from the 70+ days of 100 degrees in Texas.

While I was limited because of another tournament back in Texas, Wes Bolyard stayed on five more days to play an additional 99 holes, doubling up on the Great Falls munys.  I’ll try to get him to share information about some of the other frugul fairways of Montana that he visited.