Playing in Arizona, I ended up out in the desert—nothing unusual, especially if you hit another errant tee shot—and I found that my ball was very close to a cactus. I had shorts on. So I took the towel off the golf bag and wrapped it around the leg closest to the cactus before hitting the shot. I got the ball out just short of the green and got up and down for a par to go back ahead of my fellow competitor who three-putted.

That’s when he quickly informed me that I had violated the rules, citing the case of Kevin Stadler, who put the towel down on the ground to keep from getting his pants wet when he had to kneel on his knees to play a shot from under a tree at Torrey Pines in 1987. I thought that referred to building a stance, but wasn’t sure. 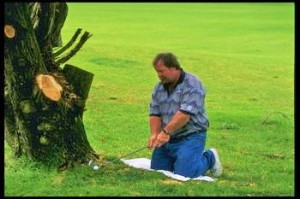 I thought getting two strokes added to my score was better than having to pick out cactus needles out of my leg. Just to make sure of the correct procedure before turning in my score, I asked the golf professional to see his Decisions on The Rules of Golf. I keep a rules book in my golf bag, but not that one. To my surprise, I found the situation covered under Decision1-2/10. It was not a violation as long as I fairly took my stance, and I did that.

However, if I had instead placed the towel on the cactus, I would have had to add a two-stroke penalty like the other player thought. If that situation had come up in match play, I would have lost that hole.

Looking further into the cacti situation, I also discovered that finding your ball near a cactus or even poison ivy is not considered a “dangerous situation” whereby you would get relief and be able to drop your ball in a safer place.

However, situations like finding your ball near a live rattlesnake, something that could easily happen in the desert, or a bees nest or even an alligator would be considered a “dangerous situation” where relief would be granted. Just be sure not to drop it closer to the hole.

Fire ants fall into that category, too. I can remember officiating at what then was a Ben Hogan Tour event in Odessa where one of the touring professionals asked for relief when he found his ball near the lip of a fairway bunker. I said, no since the ants were just small ones and not the fire ants mentioned on the rules sheet. However, he wanted another opinion. The Tour official overruled me and gave him relief. Later, the official told me that I was probably correct. “But I have to work out here regularly,” he added.

In another case mentioned in the decisions, I found out that you can get relief if you found your ball in a bird’s nest. That’s something that has never happened for me.

Looking back at Decision 13-3/2 cited by my opponent, I thought it was interesting that if I had wrapped a towel around my knees–instead of placing it on the ground as Stadler did–that I would still have been penalized. Putting on a rain suit would work in both cases and would not be a violation of the rules.

If any reader has a question about the rules, I’ll do my best to provide an answer. Send to onthetee18@msn.com 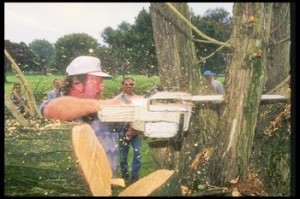 Stadler was invited back to Torrey Pines in 1995 to help cut down the offending tree. He accepted.