Golfers arriving in Costa Rica through the capitol city of San Jose–actually the Juan Santamaria Airport is located just outside the city of Alajuela–have some opportunities to enjoy their favorite sport at two 18-hole championship courses, the Cariari Country Club and the Valle del Sol Golf Course, with green fees in the $100 range. Most of them arrive at night and spend their first night at a nearby hotel. For golfers, Landy Blank of Costa Rica Golf Adventures (www.golfcr.com) recommends either the Doubletree Hilton or the Wyndham Herradura. 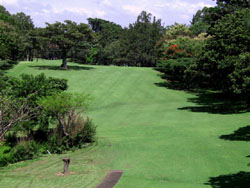 The Cariari Country Club, located in the trendy San Antonio de Belen area, was the first 18-hole course in the country and in Central America when built back in 1975. George Fazio handled the design work and nephew Tom Fazio built it on an old coffee plantation. When he visited in 1975, the president of the country donated 5,000 pine saplings.

The course hosted the Friendship Cup in 1979 and 1980–PGA Tour events won by Larry Zeigler (-2) and Raymond Floyd (-9). When the Tour las Americas came to town in 2005, the winning score for 72 holes was five over par, further proof of how tough the course is, even for the professionals.

It’s short by today’s standards at only 6,579 yards from the tips, but it plays longer because of the wind and three par 4s, Nos. 3, 10 and 18, where a fairway wood or hybrid might be the best choice off the tee. Even from where I played with Blank at the whites at 6,260 yards, the course rating is 72.7 with a slope of 140. I had 3-wood approaches to four of the par 4s playing in November when it was still wet.

With trees bordering most fairways, it definitely puts a premium on accuracy off the tee, something lacking that day for me. Otherwise, you will sometimes be chipping back to the fairways as I had to do on several occasions. Approach shots must also be accurate as the greens are guarded by well-placed bunkers, waiting to catch errant shots. The Bermuda greens are tricky and you have to know which way the grain and slopes will affect your putts. Thank goodness, a good caddy, mandatory at the club as either a fore caddy or to carry your bag if you want to walk, can certainly help.

It’s a private club, but gringos can get a tee time. While some of the hotels might help, the best bet is to check with Blank. He and wife Susan also run the golf shop at the club. If you want to play early, your best bet is to play during the week as tee times are reserved for members until 11 a.m. on the weekends. “It’s sometimes actually nicer to play in the afternoon,” Blank added

If time permits, the Valle del Sol, located about 20 minutes away, should also be on a golfer’s must play list. Tracy May renovated an original nine holes and built another nine holes to open in 2001. It’s a resort-type course certified by the Audubon for being eco-friendly. There are attractive water features and great mountain views, according to Blank. For those wanting a challenge, it can be stretched to 7,017 yards, but wide fairways let the big hitters rip it. It’s player friendly from the shorter tees where most visitors play. “If you are suffering from winter rust, it’s a great place to work out the kinks,” added Blank. It’s among five courses in Costa Rica recognized by Audubon International for their environmental efforts and definitely has contributed to raising the number of local golfers in the last decade.

Blank also points to an average temperature around 78 as another reason to consider the San Jose area for golf. “The summer months in the U.S. are the winter time in Costa Rica,” he said. “So it’s a great getaway from those suffering the dog days of summer in the states.” Blank doesn’t normally book golfers in September and October, the two months when the most rain falls.