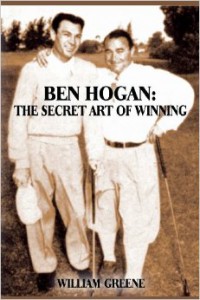 Historian William Greene, or Bill as myself and others in the DFW Senior Tour know him, believes he discovered the “real secret” to Ben Hogan’s success, not the one the Texan shared with readers many years ago in a national publication.

Based on an extensive analysis of the scores from the past 70 years of the majors, Greene thinks it was Hogan’s ability to use course management to shoot descending scores, meaning that you posted better scores in at least three of the four rounds. Looking back, Hogan accomplished this feat in winning four of his last five majors.

Greene does make it clear that shooting descending scores doesn’t guarantee a win, but feels it at least give players their best chances of getting into the winner’s circle.

Greene used this theory about descending scores as the focal point of his new book—Ben Hogan: The Secret Art of Winning. The e-book, which Greene self published and is now available on www.amazon.com, is actually a screen play where he uses the first person narrative to put himself in Hogan’s shoes and present conversations Hogan might have had with others.

I found the dialog interesting, revealing a little insight into the personal character of Hogan and others from that era, who with the exception of Hogan that I never met.

While the theory about descending scores makes sense, Greene also makes the point others have that other reasons for Hogan’s success was all the time and effort he spent on the practice tee plus his ability to concentrate on his game.

In closing, I did notice that Greene indicated that Nicklaus, who has won more majors than any other player with 16, seemed to have success with the descending scores formula.