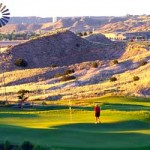 Golfers more accustomed to playing parkland courses where they can see most of what faces them are likely to find that their first impression of the Black Mesa Golf Club on the Santa Clara Pueblo in northern New Mexico can b e intimidating, perhaps on the verge of being impossible to play and enjoy.

Count me among that number when golfing buddy Ray Mullins and I ventured out the first time without the benefit of knowing where we should hit many of the shots. However, getting more chances with the benefit of “Tom’s Tips to Taming Black Mesa” by golf professional Tom Velarde convinced us that using willingness to sometimes play position golf and then to hit good shots paid dividends and the course actually became a little more player friendly and an exciting challenge.

In the final analysis, we both agreed that Black Mesa definitely deserved all the accolades it has received, including being No. 2 in New Mexico and being one of the top 100 public course in the United States as ranked by Golf Digest since its opening eight years ago.

Very little earth had to be moved for the design by Baxter Spann of Finger Dye Spann as it traverses through dramatic sandstone ridges with fairways framed by arroyos.

There are more than 150 bunkers, some strategically placed to catch errant shots and others used as alignment indicators and to define the fairways. Most are deep and unkept around the edges like ones in Scotland or Ireland. Adding to the challenge are large undulating greens that demand approach shots be kept on the right shelves if you want to avoid three putting.

The scenic beauty of Black Mesa is enhanced by the fact there are no man-made distractions, offering dramatic views of the sprawling valley and distant mountains, including a few of Black Mesa, the course’s namesake. There were times when I felt like we were the only ones on the course. You do get occasional glimpses of other golfers, but there are really no holes parallel to each other. Each hole is shaped by the surrounding landscape; much like an artist does in making a piece of pottery, and presents a uniquely different experience, something you can’t say about a lot of courses.

Black Mesa could have the best set of four par 3s on any course I’ve ever played. The green on No. 4 is tucked in between natural peaks in the sandstone foothills with plenty of rough landscape awaiting errant slices. There’s a false front on No. 8, making it important to find the right putting zone from four possibilities. The green on No. 11 sits in a natural box canyon with a 30-foot wall very close on the left side. Owner Eddie Peck convinced Spann to change the routing to work it into the design. No. 15 plays downhill and slopes left to right, leaving some shots either in bunkers or in the only pond on the course.

The par 5s, varying from 536 to 603 yards, are challenging, especially for those playing for the first time. You sometimes don’t know how far to hit your second shots, which are semi-blind in most cases. With the right wind conditions, long hitters can get home in two and have chances for eagles, but most players should be happy to get their third shots on the slippery slopes for birdie chances. No. 16, called “Stairway to Seven,” plays uphill and may the most photographed on the course.

There are a great variety of par 4s, including No. 5 that can be stretched to 496 yards and a pair of short ones (Nos. 7 and 14) where leaving the driver in the bag might be the best bet. No. 17 doglegs left and demands a long and accurate tee shot followed by an uphill approach that usually calls for a little more club because of the wind. Black Mesa concludes with a dogleg right where players have to decide how much they want to cut off and go over a dry creek bed with their drives. Then the downhill approach must be hit to a narrow green protected on the right by deep bunkers and surrounding high grass.

Mullins and I really enjoyed our final round when we played a mixed two-person scramble, me with Cori Brett and him with Nancy Howard. Both ladies felt the course was fair from the forward tees. I had never seen Ray play as good as he did and Nancy made some key putts for a 36 on the front 9. Things didn’t look too promising for my side as we trailed by four holes after 10 holes, but Cori birdied the 11th by herself and I reached back into how I used to play as we won three straight holes, Nos. 15 and 16 with birdies and No. 17 with a par to finish in draw with no time to continue as everyone was waiting on us to go to dinner.

Mullins summed up our Black experience: “The altitude is not the only thing that will give you a high.”