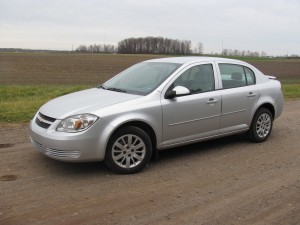 Unfortunately, not my car.

Inevitably, rental cars are a way of life on many golf excursions and there the quandary lies:  big car, big trunk, big price or small car, small trunk, small price?

Returning from a Caribbean cruise which disembarked in Miami, I had to get to Orlando for the PGA Merchandise Show, always held in late January.   Following my own A-List travel advice suggesting a drive of four hours or less is preferable to flying, the trek was 212 miles,  just under the  limit.  And so, I opted to rent a car.  One way, since I was taking a flight from Orlando home to Detroit.  My objective?  Find the cheapest one-way deal which would give me the two-days and 400 miles I would need.

Trolling the web taught me a couple things: some agencies charge a hefty $50 drop-off fee for one-way rentals;  others had web or senior specials (reluctantly considered now that I am over 50, but oh well….).  Finally, I found the perfect deal at E-Z Rent-A-Car:  pick-up Thursday morning, drop-off Saturday morning, unlimited miles, no drop-off charge.  With a quote of $54 how could I go wrong?

E-Z is aptly named as pick-up and drop-off were definitely that: E-Z.   And the counter personnel did not attempt to force the expensive extras, though I wished they’d tried harder to sell me a SunPass after crawling through the umpteenth %*@&#! Florida Turnpike toll booth’s Change Returned lanes at a snail’s pace.

However, when they say Economy car, they mean it.  My car was as barren as Michigan golf courses in February.   During the prerequisite walk-around to assess past damage, I could only imagine what this poor vehicle had been through since its American birth in 2010 and an 18,000 mile journey thus far.  There were so many dings, scratches, dents, scrapes, and ripped panels both inside and out that the attendant simply scribbled and X’ed out the entire damage inspection report for the car and called it a day.  A car I’d sold two years before, a 2000 model, looked brand new compared to this.  He sheepishly asked if I wanted another car, but I had already decided this was good thing:  a rental car left all day in the parking lot of the Orange County Convention Center could be susceptible to major damage, what with golf professionals and jaded media meandering and driving about – also in rental cars, heads brimming with equipment overload and visions of too many dollars spent.  I’d have to pay for any mishaps since I always opt out of sky-high rental agency insurance.  This way, the damage was done and I’d be in the clear.  A perfect solution.

As soon as I sat in the car, dubbing her ‘Babycakes’, I was again reminded that in this case, Economy meant Economy.  With hand crank windows, no power locks, no automatic key fob/trunk release, and no cruise control, I had to be vigilant and at the mercy of an ever lightening foot thanks to the dozens of Florida Highway Patrol cruisers lying in wait for those who strayed above the speed limit.  There must have been other hapless and frugal drivers minus cruise control given the number of motorists pulled over on the side of the road.

I’m ecstatic the skies were clear with no rain in sight……I might have lacked windshield wipers too.  My buggy did have headlights and they even worked correctly.  With a tiny 13-gallon fuel tank,  I used up most of my gasoline just getting to Orlando;  however the good news was that filling Babycakes up didn’t cost too much, thus avoiding $4.99 per gallon gas charges at the rental return dock.

But the best part of the deal was this:  you know how easy it is to forget what your rental car looks like because it isn’t the car you drive at home?  Not so with this baby.  Well yes, it was an innocuous shade of silver but my car was the only one that had 3/4 of a choice four-letter word keyed into the hood….misspelled.