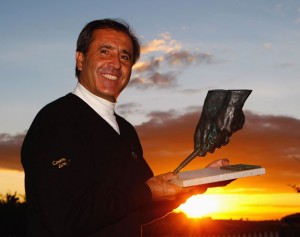 Seve: from one sunset to another.

I wish I had known Seve.  Not simply because he was dark and handsome in the Spaniard sense and made women swoon, but more so because he was that one-of-a-kind golfer who stood out from everyone else.   He was easily identifiable by sight and by swing.  Today, it is sometimes tough to tell one player from another, what with cookie cutter swings and press-tent perfect quips that perhaps are too well rehearsed.

Not a fan of Seve’s match play and Ryder Cup tactics, which appeared ungentlemanly and did seem to teeter on the brink of mind games and cheap tricks, still, I respected the man for his talent and appreciation of the game.  He loved golf and his only goal was to win.

Early Seve was best:  he never worried about what his swing looked like.  He went at it full bore, hit it all over the place, then found his ball and hit it again.  There’s beauty in that…..because most golfers who love the game do exactly the same thing.  They don’t fret if their swing plane is off or if their head stays down or if their heels come up or even if they hit it two fairways over.   They search for their wayward shots and rejoice when the ball is discovered, all the while thinking, ‘Hmmm, what shot can I fashion to get this ball on the green?’   Seve was the Master at it…..long before Tiger.   Later in his career, why he ever chose to dissect his game and tame his swing – only to end up somewhat paralyzed by too much analysis and techno-think – only he knows now.

Cancer is a thief.  It steals from us every day.  I have my own theories as to why.  Brain cancer is a tough sentence and mid-50’s is way too young to die.   But for now, let’s simply rejoice in a life well lived.  Seve saw the need to bring the game to countless young people and had the pride to expose the beauty of his homeland for all the golfing world to see.   And so, we need to continue his legacy and teach the pure love of the game to our next generation…..wherever they may live.