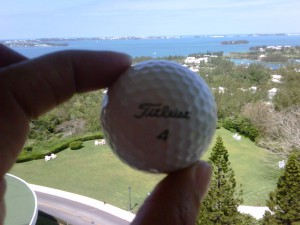 THE ball for ace #4 during the Bacardi Par-3 Championship at the Fairmont Southampton Princess in Bermuda.

The elusive ace……when you’ve never had one it seems as though the whole world has.

In 1993, I had been playing tournament golf for almost 30 years and still, no hole-in-one. Two of my brothers, Chris and Patrick Parrott, and my Dad, Buck, had eight between them, though Pops waited forty years for his first of a mere quad of aces. What was I doing wrong?

Dad’s fondest wish was that all of his kids would compete together along with him at an annual event that was a 70-year plus Detroit tradition:  the Detroit News Hole-In-One contest. This event was held at a pastoral Donald Ross classic course, Redford Golf Club, now known as Rogell Golf Club in honor of a city icon.

With 14 holes on one side of Berg Rd., the other 4 holes began with a sweet downhill 140-ish yard par-3 through which the Rouge River angled across. Seriously large trees fronted the green on the left. Masses of bushes guarded the right and an OB fence backed it all up. It really wasn’t that tough of a hole but like the 12th at Augusta, winds would whip about and their effect was often hidden by falsely docile trees. Add to that the trauma of hitting shots before an audience and a seemingly simple hole turns ugly in a heartbeat.

I attended the festivities every year to see my Dad and brothers try to repeat their aces there but could not compete myself because in order to qualify, you had to have a bona fide ace on a regulation course. Alas, I did not. Birdies, eagles, and even two double-eagles yes, but no ace.

In July of 1993, a strange thing happened. Playing with RN and registered hypnotherapist Zoe Alpern during a Women’s Metropolitan Golf Association (WMGA) event, our lead-off group was stalled. WMGA is a traveling group of women who play tournament competitions every Wednesday at Detroit area public courses. Quite often we would be sent off behind groups of men ‘so as not to hold them up’ and we’d have to wait. To pass the time, we would strike up some interesting conversations.

This day’s talk turned to aces. Zoe asked how many I’d had and, sadly, there were none of which to boast. Upon hearing this news, instead of commiserating, Zoe offered some stern advice: “You’re not trying hard enough. When you step up to the tee on a par-3, do you SEE the ball going into the hole before you swing?”

Taken aback by her response I had to admit I’d never actively thought about holing out the shot.

“Well, that’s your problem,” she decided. “Stand behind the shot, visualize the ball’s path into the hole. When you take your club back, keep saying, ‘Into the cup…. into the cup…..into the cup.'”

I thought it was a bit much, but hey, I can always learn something – especially from someone who has HAD a hole-in-one. So, on the next hole, a 130-yard par-3, I didn’t swing until seeing that picture in my mind’s eye. Staring down the shot and the ball, I did what I was told and parked my 8-iron two inches from the cup. A few holes later, a smooth 4-iron yielded a second dead-on-line 10-foot birdie, from 165 yards. I truly thought that one was going in when it traveled like a dart with eyes toward the pin. Flabbergasted, I peered at Zoe. “Well, you might not get that hole-in-one today but you will get it this year. And soon.” Even if she was dead wrong about the ace, the 2’s were pretty darned good.

The following week, during the Michigan Women’s State Amateur contested at Black River CC in Port Huron, Michigan, my game was abysmal in stroke play on qualifying day as contestants jockey for position for match play on the remaining days. Black River is one of those sneaky tough courses which don’t look so dangerous on the scorecard or from the tee boxes, but you quickly realize you’ve underestimated the difficulty while continually hashing your ball out from underneath the pines and hardwoods.

And as a conservative player who generally keeps it straight and playable, I was having fits. By attempting to avoid trouble on one side of the fairway, a worse destiny awaited elsewhere. After a round in the low-80’s, clearly I’d hacked my way into First Flight where there is no way to win the Amateur. You must qualify for Championship Flight to do so. Zoe found me on the practice putting green. Upon hearing my tale of woe, Zoe, who also played, said, “Your mind is stronger than you think. By concentrating on the trouble, your mind thinks ‘Water!  Trees! Sand!’…..and that’s where you’ll go. The mind doesn’t hear ‘don’t.’ Instead, focus on where you want the ball to go.”

I did manage to qualify for Championship Flight because others fell victim to bad golf at Black River as well. But my game was in for a definite improvement. From then on, with Zoe’s words in mind, both my focus and play were stellar.  Exactly eight days after Zoe’s prediction, I stepped up to the tee on the 179-yard 11th hole, a beautifully elevated par-3 with willows draping the skull-shaped two-tiered green guarded by bunkers on both sides. It was late afternoon and my opponent and I had just made the turn during our second match of the day. I had birdied the short but testy dogleg left 10th,  for the third time in a row, and had the honors on #11.

The sun was on its descent, casting magical shadows on the hole and hiding the pin, which was on the upper level.   A shot closer to 190 yards was needed.  Eyeing the 2-iron in my bag – I rarely used it then and don’t carry one now – it just seemed to be the right club despite the fact a 5-wood on the same hole during my morning match landed on the lower tier. Zoe’s mantra suddenly popped into my head and I backed away to get a better sight picture. My mind saw the 2-iron launch into the air, draw slightly to the left, take one bounce and disappear. Addressing the ball, I took the club away thinking ‘into the cup….into the cup…..into the cup.’

The ball sailed toward the green, drew in left only slightly at the flagstick, landed on the upper tier, took one bounce and disappeared. I was stunned. An incredible euphoria took over – one that I never thought I’d feel if my ace ever came. I didn’t yell. I didn’t scream. Instead I savored the moment…..because it was possible the ball had scampered over the green and into the shadows. After all, it was almost two hundred yards away. Two Rules Committeewomen were there and shouted, “It went IN!……you got a hole-in-one!!!”

Moments later Zoe pulled up in a cart, took one look at me and said, “You got it, didn’t you?” Where had she come from? She hadn’t seen the shot nor heard the cheers from those at the hole. But she knew. I told her, “Zoe, you are scary. You need to go away.” She smiled and drove back to the clubhouse. To this day, I don’t know how she knew to come to that spot when she did.

And that’s not the end of the story: standing in the trees left of #11 was my friend, colleague, internationally recognized golf writer, and long-time member of the Golf Writers Association of America (GWAA), Jack Berry. Jack was covering the tournament and had witnessed the ace. Flashback to 1963: Jack was the golf writer for the Detroit Free Press and visited my house in Detroit to write a feature on my family, ‘Everybody’s an Athlete in the Parrott Family.’ I was seven and awed by him then, and though we are both a wee bit older now, I still am. Jack was also a fixture at the Detroit News Hole-in-One contest every year and announced play-by-play commentary on the action at Redford’s 14th tee. More than a few times he had asked when I would make my debut at the contest. Flash forward: as I walked down the hill toward the green to retrieve my Titleist 3 out of the cup, Jack approached me and grinned as he shook my hand. “Let me be the first to extend a personal invitation for you to enter the Detroit News Hole-in-One Contest this year…….and congratulations!!!” I thanked Jack, telling him I would not miss it for anything, even if an engraved invitation from the Queen arrived in my mailbox.

I claimed my ball and placed it safely in my golf bag: its work in this world was complete, dirt and all.

In my match, I was now 4-up. The 12th hole was a 380 par-4 that ran along the Black River. I laced a drive down the center, though how, I don’t know as excitement rushed through me. About 165 yards from the hole, I stood behind the shot again, and put Zoe’s principles back to work. The ball sailed toward the pin, rimmed the cup and sat 2 feet from the hole. I had almost holed out that shot as well. Another birdie, and then a measly par 3 on the next hole, and my match was over. Looking back, I had gone 3-1-3-3 in four holes. Even though the match was completed and we were supposed to come in immediately to report the results, the committee agreed to bypass that rule so I could get in the full round and make my hole-in-one official.

Heading back to the clubhouse, word had spread like wildfire and many of the women had come out to greet me. But their questions and comments mostly centered on one subject which wasn’t, “When will you be in the bar to buy drinks?”, although that did come eventually. Instead, it was “Have you told your dad yet?”

I can’t recall anything in recent years giving me more pleasure than sitting in my car in the parking lot punching in my dad’s number and asking that wonderful kid-like question: