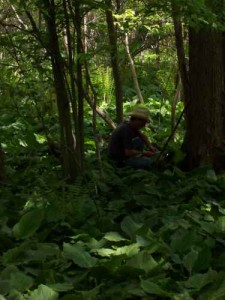 If the sunlight can't reach the forest bottom, odds are your club won't find the ball either.

The Ball Unplayable rule is an escape hatch for a lot of mistakes, but sometimes it simply doesn’t go quite far enough to grant relief when you really need it.

Bogey golfers across America were likely spellbound watching Kevin Na battle through weeds and thorns en-route to a not-so-sweet 16 (we think) during the 2011 Valero Texas Open.  Na ran into trouble on the 9th hole of the TPC of Antonio AT&T Oaks Course when an errant tee shot strayed way right, into typical Texas scrub.   Finding the ball was remarkable enough, but Na then realized he didn’t have an open shot, so back to the tee he trod, and did exactly the same thing but this time played a provisional ball.  That went left, he abandoned the provisional because he couldn’t find it, then attempted to play his 2nd tee shot that lay deep in the woods.

When did Na make his course management mistake?  Yes, we know he shouldn’t have hit it there in the first place.  After losing his provisional ball and then opting to play his 2nd tee shot, which was in a similar place as the original ball he picked up in favor of going back to the tee, Kevin made his first bad decision.  Everything else that happened after was a moot point.  Why?  Because, by electing to play that ball, he automatically minimized one very valuable option of Rule 28 – Ball Unplayable:  the choice to go back to where you had hit the previous shot, or in this case, back to an open shot from the tee yet again.  On his mind, no doubt, was holding up play with his third trek back to the tee, where he would be hitting 5, probably on his way to an 8.   But he didn’t.  After hitting from the woods, he was deeper and deeper in trouble and this time, there was no way out other than to keep on hittin’.

Not to make matters worse, but indeed more rules’ intriguing would have been this situation:  suppose after losing his Provisional ball, Na also wouldn’t have found his 2nd tee shot and had to go back yet again to hit a 4th tee shot, now hitting  7.  By finding and playing his 2nd tee shot, the Provisional is void;  but had he not found that ball, the lost Provisional becomes the ball in play, now lost, and it’s back to the drawing board.  However, even then, assuming his 4th tee shot found safety, he would still be better off, probably scoring an 11. 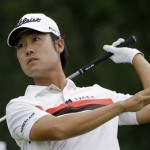 This is one area of Rule 28 that is a difficult call.   We all hit bad shots and when we do, the first rule is to get out of trouble on the next shot….or, don’t follow one bad shot with another.  When coupled with poor decision-making, ‘Ball Unplayable’ is sometimes misunderstood and not quite the panacea people think it is.   Golfers think they can use it anywhere and will always get a clear and open shot by taking the one-stroke penalty.  Not true.  What are the options of Rule 28?

1) Play a ball as nearly as possible at the spot from which the original was last played;

2) Drop a ball within two club-lengths of the spot where the ball lay, not nearer the hole;

3) Drop a ball behind the point where the ball lay, keeping that point directly between the hole and the spot on which the ball is dropped, with no limit as to how far behind that point the ball may be dropped;

Note: With regard to option 3, many people think they can drop the ball back ad infinitum on a line from where the ball went into trouble, thus getting them back into the fairway.  Not so.  You must stand by your ball, face the hole, and take the ball back on THAT line as far as you wish.  Usually this option takes you deeper into trouble, but sometimes another fairway is parallel to the hole you’re playing, making this option more desirable.

The lesson here is this:  before hitting, look around to determine what the worst possible case scenario might be.  If you are in deep wabbage with trees and brambles everywhere,  as Na was, get out while the Rules still give you a clear shot because once you hit one in the junk, you are stuck there.  It would be nice if the Rules provided an alternative option, like a ‘two-and-out’ (hit two shots and then drop it out of the mess) but since I don’t see that happening anytime soon, you must know when to say ‘When’.