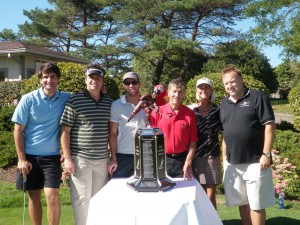 When are charity scramble golf tournament directors going to figure out that imposing the ‘Three Drive Rule’, where everyone must use their own drive a minimum of three times, does exactly the opposite of what they want to achieve, that is, to level the playing field?

I’ve wanted to write this article for years.  And now, after having played in yet another event where not only was the Three Drive Rule imposed, they also determined tee selection based on handicap, and then moved ALL of the par-3 tees to the Back Tee – which meant that three out of five tees played 180 – 200 yards, one of them to a peninsula green pretty much surrounded by water, photo below.  On that one all of my playing companions, who were actually pretty good players, were in the drink.  I did manage to hit the green with my trusty 5-wood…..but don’t think I wasn’t sweating a tad.   Most men can’t carry the ball that far, so what did the women do? 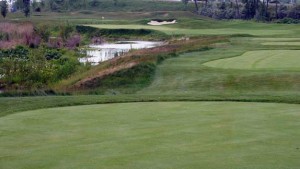 Jack Nicklaus-designed Harbor Shores 4th: a scary shot from the back tee.

Participants in charity scrambles have tried to ‘stack’ their teams forever, loading them up with big hitters, accurate iron players, and ‘touch-of-magic’ short game artists, including a good putter;  quite often these individuals never quite rise to the occasion.  But why, please tell me, is the emphasis almost always focused on tee shots?  If anything, restrictions should be made on putting, not driving.  That’s where you score.

Think about it:  if you have a team of four good players, the ‘Three Drive Rule’ (TDR) means nothing to them.  They will still finish strong if they have a good putting day.  If instead you have a team with one good player and three mediocre or higher handicap players, the TDR will actually penalize them considering the pressure mounts as the remaining three team members will fret over the possibility they could hurt their team with poor shots when they’re needed.  The good player can help make up for a poor drive, but the added pressure on that person will hinder.  If you have a team with four high-handicappers, they have no chance at all.

You see, the tougher you make the limitations, the more you handicap the not-so-good teams.  And pardon me, isn’t this supposed to fun? A day away from work and its pressures? Are the prizes you’ll win really that valuable or are they mainly for show – another trophy to put on your shelf that someone may notice occasionally?   The Alternative Golf Association (AGA) is on a mission to change the face of golf by making the game more fun.  Charity Scrambles are often many folks’ introduction into the game.  Shouldn’t their initiation be a pleasant experience versus a white knuckle, scared-to-death ‘don’t EVER ask me to do this AGAIN!!!’ endeavor?

There are other ways to even up the charity scramble field but none are truly optimal, depending on where you fit in.  As a low handicap golfer, I despise the ‘drop-back’ format where the person whose shot was last used cannot hit the next one – including tapping in a 6-inch putt.  Not much incentive to make that birdie putt, is there – knowing you are OUT on the next tee shot?  I, and others with a 10-12 handicap or under, miss playing half of the golf course!  Or, there is the format where tees are designated according to handicap.  This doesn’t really work either because quite often, higher handicap players can sometimes hit the ball pretty far – they just aren’t as accurate.  If your tournament chooses to do that, could you please remember that women’s handicaps are not really equivalent to men’s and that a woman with a 3-handicap will not want to play the Black Tees, where the Men’s 0-8 handicaps will play?  You’ll need to adjust those tee box selections because it’s a different animal with regards to course design and playability.  More than once I’ve seen rules sheets that designated ‘Janina’ tees!

Another format that’s used and not so much fun either is the ‘team handicap must add up to more than 40’.  First of all, people lie about their handicap or can manipulate it however they wish;  for example, as a woman, I could say I was a 15-handicap and anyone who didn’t know me would think that was a great handicap – for a woman…..but I play to a 4.  Big difference; secondly, men’s and women’s handicap numbers may look the same, but they do play differently – I cannot pretend that my 4-handicap equates totally to a man who carries a 4.  Where it shows up most is on long par-4’s or par-5’s where my fairway woods cannot carry like a man’s shot.  Of course I do make up for it from 150 yards in;  third, shouldn’t you be able to play with who you want rather than selecting your partners by number?  Oh, so cold!

The best bet is to just let everyone play.  If you really want to maintain control over who wins something, adjust the awards.  Sure, you can give low score First Place trophies and prizes because you’ll hear whining if you don’t, but instead of Second and Third Place based on score, match the awards with a blind draw.  Pick 13th place or 20th place to receive prizes.  Last place is usually a good one too.  That way, even the four high-handicappers team will actually have a chance to win something.

There’s also something else you can do:  even up the field – and collect more money – by offering a $20-$50 per team novelty package:  The String-Kick-Toss.   I played in an event where you received a 20-foot string which you could use it in any way you wished:  get out of the water, ‘make’ putts that sat on the lip, move from rough to fairway, etc.  Every time you used a length of string, you cut it off until there was no more.  Then, you’d also get a Kick (remember how you’ve always said ‘I could have KICKED it in from there!!!!), and a toss (you know you’ve been able to Bocce-ball toss it out of a bunker closer than you can hit it sometimes?).  You pick when and where.  And, no, it won’t hold up play.

Remember that the majority of golfers can’t break 100.  Shouldn’t the event cater to that fact and make it fun for more golfers to play, knowing that they may just win something?  Anything?