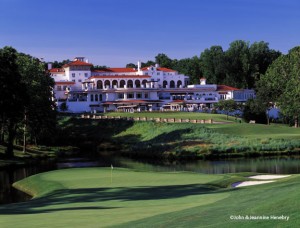 For years, the U.S. Open has been the most envied, aspired to, yet oft-dreaded event on the golf scene.  We can’t really call it the ‘professional’ golf scene since the tournament has always been open to amateurs, which are the lifeblood of the USGA.   Year after year we have witnessed meltdowns and drama due to the tough, and sometimes unfair or untenable conditions;  we’ve observed grounds crews as they squeegee and/or water greens in between groups as Mother Nature both drenches and bakes playing surfaces to unplayable consistencies;  we’ve witnessed a complete rebuild of an 18th green bunker, literally overnight, after drenching rainstorms wreaked havoc at Oakland Hills in Michigan, back in 1996.

This week will mark the beginning of a new era for the USGA.  A kinder and gentler United States Golf Association has emerged under the leadership of Executive Director Mike Davis, also technically the Senior Director of Rules and Competitions.   To hear players make favorable comments about the USGA’s course set-up for this year’s U.S. Open at Congressional CC is a welcome surprise and a far cry from Opens past where veteran competitors decimated other-worldly rough and three-or four-putted slippery greens en route to scores in the 80’s.

Mr. Davis promises all the right things and seems genuinely interested in crafting a venue that will provide a very tough but fair test and will also allow players many paths to victory….or defeat.  He says he has no target score in mind when setting up the U.S. Open, but some laugh, still skeptical.  Not me….I dare say it is time.

Have you ever competed in a USGA national event?  It is a far different experience from a club championship, scramble outing, or even a state amateur.  It is serious stuff. From the moment you arrive at the course and see the banners, the scoreboard – with your name on it in perfect calligraphy – and the volunteer officials (and they ARE volunteers who are not reimbursed for any expenses) resplendent in uniform and armbands, you understand the allure of competing within the framework of a time-honored institution.

Competing in USGA events is a great experience, except that the USGA does make mistakes, and usually won’t correct them.

When I qualified for the USGA Women’s Amateur Public Links Championship in 1999 at the Santa Ana Golf Club in Albuquerque, New Mexico, the course was set up at a then unheard of 6500-plus yards.  On most par-3’s woods were needed and many par-4’s were almost unreachable, with greens protected by elevations, bunkers and water.  Players were astounded by the set-up, yet in previous years, the courses had always been difficult, though fair.  This was tough, no doubt.  But fair?  Hardly.  And the scores showed it: a few top collegiate long-hitting players topped the medal play leader board with respectable numbers but the vast majority shot in the 80’s.  I went to the rules officials to ask ‘What happened?’  Because I knew them they did admit it was a mistake.  Yes, a mistake. Apparently when the USGA representatives went out to inspect the site well in advance they assumed two things:  that New Mexico’s elevation would ‘make up’ for the longer yardage, and that the ball would run in hot and dry conditions.  The only problem was that they didn’t ask the locals their opinion, which if they had, neither assumption would have been deemed accurate: elevation would do nothing, and June might not be hot and dry in that particular altitude.  Oops.

Why it was so difficult for the USGA to change…who knows?   When you position yourself as the Ruling Body of anything, it is thorny to admit you’re infallible.   The USGA is a wonderful organization doing equally wonderful work but they are also made up of people, humans, who make errors.  There is no shame in admitting when you’re wrong, then making it better.

That’s why Mike Davis is refreshing.   He understands that the nation’s premier open tournament should be a challenge but also knows it must be playable, and variable, depending on weather and conditions. This year, he’ll disappear into the confines of his on-course office to view firsthand, via television, what he has wrought.  And if something needs tweaking, he’ll consider it……just as he may or may not amend a tee placement to create conditions for a drivable par-4, normally an Open trademark.   Aahhh, but which hole might that be?  He’s not telling.  He wants it to be a surprise and a spur of the moment decision by some of the best players in the world.

Turn on the TV, download a U.S. Open Congressional CC scorecard and let’s have some fun.