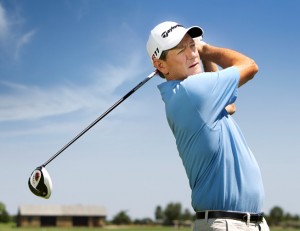 Ask Hank Haney, one of the top golf instructors in the world: slow play is killing golf.

Haney, who recently partnered with TaylorMade Golf after leaving Nike, is on a quest to resuscitate a game now plagued by snail’s pace play. In today’s fast-food and everything-convenient-and-quick world, 5 and 6 hour golf rounds just don’t cut it.

There are many issues causing pace-of-play problems, not the least of which is enduring the habits of professionals on television who take multiple practice swings and study putts from three or four angles.   Swing gurus and psychological coaches warn young golfers not to pull the trigger until they are totally sure of a shot picture, thus creating a generation of players who seem paralyzed and stalled in thought.  Recreational golfers observe this and think these tactics can improve their games too, despite the fact most haven’t got a clue what they are doing, nor why.

Haney believes that equipment makers can have a larger influence than instructors by creating golf equipment which will make the game easier and more enjoyable.  His relationship with TaylorMade is a perfect match considering he has coached over 200 Tour players and top amateurs worldwide since 1976 and TaylorMade is considered an industry leader in equipment development.  Put the two together and the combined experience has got to be good for the game.

“We share a great passion for helping golfers of all skill levels improve their game by hitting it longer and straighter more often,” explained Haney.  Much talk has centered on a double standard many think is necessary, courtesy of the USGA and their rules regarding specifications governing the manufacturing of golf equipment.   By reigning in the specs on tour players’ equipment, the USGA has also inadvertently affected play of millions of amateurs who will never know the pleasure of a 300-yard drive or a wedge, stopped on a dime.

Earlier this week, Mike Chumbler, Director of Golf at Boyne Highlands Resort in Michigan, recounted one such story.  “One of my members, an 81-year-old gentleman, wanted to replace four wedges which had seen better days.   The equipment company said they could only replace two because the USGA did not allow the same wedge specs as before.  He’s 81!  How in the world can that matter to him?”

The Alternative Golf Association (AGA), inventor of Flogton (NotGolf) golf, a more fun-filled and simpler method of play, has also called for equipment revisions which would make the game easier and faster.  Some ideas? Bounce-effect inserts for clubfaces to propel the ball greater distances and space-age inserts to help lift the ball from bunkers, certainly one of the tougher and more exasperating shots for less experienced players.   AGA Commissioner Scott McNealy, former CEO of Sun Microsystems, is a highly talented competitor but also sees the need to make the game more player friendly and less difficult in order to stem the mass exodus of current golfers and to pique the interest of new ones.   Project Flogton is now in its sixth month and equipment companies are lining up to discuss new clubs and golf balls, though not necessarily conforming to USGA specs, and to add distance, accuracy, and ease of play to the game.  ‘New’ Rules are suggested as well, many which may be familiar to long-time golfers who play a ‘looser’ game with mulligans, gimmes, ‘winter rules’ and minimal penalty strokes with more convenient drops.  For more information, go to www.flogton.com. 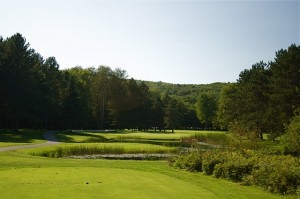 The 174-yard 12th at Boyne Highlands Heather course, host of the GAM's 100th Michigan Amateur, can slow up play - with wetlands galore.

As far as speeding up play in tournaments, the Golf Association of Michigan (GAM) has instituted a Pace-of-Play policy which rests solely where it belongs: with the player.   Their tournament policy states: ‘If you are the first group in the field, play efficient golf.  If you are following a group, keep up with the group in front of you and you will not have a pace of play issue.   The pace of play is 15 minutes per hole.   There will be atomic clocks located at the 5th, 9th, 14th, and 18th greens to let you know what the current time is and help you determine if you are on pace.’

Officials are present at the 9th and 18th holes to check pace.  If the flagstick is not placed in the hole prior to the expected time, the group is subject to a one-stroke penalty.  If this pace continues and the same thing happens on the 18th hole, an additional two-stroke penalty may be assessed.    No warnings are given.   Rules Officials are told only to time the groups and if necessary, to present up to two Violations Cards which state how many minutes behind the group is.  There are no arguments or discussions allowed on the course, though there is an Appeals process at the end of the round, before scorecards are signed.  Each player is allowed to tell their story and often, the penalty is not assessed if there is due cause for the delays.

For those who believe special consideration may be given to favored players, think again.  During Tuesday’s first round of medal-play for the 100th Michigan Amateur, one stellar group was handed 1st Violation cards at the turn.   19-year-old Defending Champion Joey Garber, former Champion Tom Werkmeister, and exempt player Casey Baker were all subject to a penalty because they failed to finish the first nine on time.  In their defense, playing conditions were tough, the northern Michigan weather was poor with rain off and on, and one of the players was struggling on a couple holes.  However, the policy is very clear.  Ultimately, no penalties were assessed, though Garber addressed the situation after the round.   “The course played hard with high rough and rolling greens.  I only missed one fairway but still had 4 birdies and 3 bogeys.   However, regarding the pace of play issue, the review process cleared us.  I like the policy.  We have 5 and 6-hour rounds in college, sometimes two rounds in one day.   Now THAT is tough.  I have to eat right, get my rest, and drink plenty of water to endure all of that.”

Some may argue that the GAM policy is extreme but according to Assistant Executive Director Tonia Branch, “The players are all aware of the policy when they enter and then compete in the tournament.”   When 156 players must be moved through the course and there’s only so much daylight, 52 groups saving even 15 minutes is huge.   To view the GAM Pace of Play Policy, go to www.gam.org, click on Tournaments, then Policies, then Pace of Play.

The Southern California Golf Association, one of the largest golf associations in the country and host to hundreds of tournaments and qualifiers, also has a very specific Pace of Play policy.  In SCGA events, an expected time is posted on each scorecard preceding play and competitors are expected to adhere to these times.  Rules Committee officials will issue a warning if a group falls behind, then subsequent penalties will be assessed if infractions continue.  However, players are still expected to be responsible for keeping pace.

This year’s SCGA Amateur Championship, first held in 1899 – making it the oldest event in southern California – will take place July 8-10 at San Gabriel CC, in San Gabriel CA.  The field of 84 players will be pared down to 42 after two rounds of stroke play on July 8.  With that many golfers playing 36 holes, it is vital to keep the pace of play moving.  Two 18-hole final rounds will follow over the next two days.  On Thursday, July 7, from 2 – 6pm, the public is invited to a free Junior Clinic given by the San Gabriel CC  professional staff and members, as well as SCGA staff and amateur players.

For more information about the tournament and clinic go to www.scga.org.   To view the Pace of Play policy, go to the website, click on Tournament Policies and Rules, the go to Pace of Play, located on the right side of the page.

More golf associations need to take strong actions to address such a serious problem which will continue to affect the health of the game.   If yours doesn’t, now is the time to ask “why not?”

One Response to “Slow Play: You’ve Met Your Match”