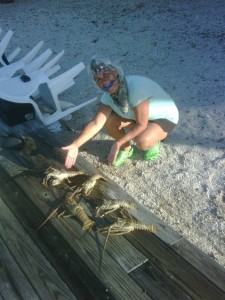 Anticipation sets in as I head to one of the most beautiful places on earth:  the Florida Keys.  Oddly enough, there really isn’t much golf down there, with the exception of the gorgeous Key West Golf Club, the only ‘Caribbean’ golf course in the United States.  Built on 200 acres just prior to traversing the bridge to the ‘Conch Republic’ of Key West, this 6500-yard Rees Jones redesign was built among Florida wetlands and vegetation and lies not far from the southernmost point in the country – about 90 miles from Cuba.  I am looking forward to playing my first round of golf in the Keys, especially negotiating the par-3 ‘Mangrove Hole’ which requires a brave shot over the thick mangroves so prevalent in the Sunshine State.

While golf may not be the focus here, fishing, boating, lobstering, stone-crabbing, and…..uh…..eating Keys-style food and enjoying the local beverage ,is.

Truly the Keys are in a different world.  If you’ve never been there it is difficult to understand how one can languish for days at a time and never turn on the TV, listen to the news, or have no idea of what is going on in the world.  You don’t care. A couple years back when Michael Jackson died, we heard about it – but albeit a day or two later.  Where else in the world would you be spared that news?  That, my friends, is the Keys Disease you may have heard of.

Lobster season is in full swing and stone crab season opens next week.  Most people think lobsters are only found in the colder waters of the Atlantic around Maine.  Not so.  The sweet and delicate crustacean known as the Florida or ‘spiny’ lobster lives in the warm Caribbean waters and in the Gulf of Mexico.  A few of us will head out for some shallow diving around Big Pine Key, about 25 miles east of Key West, and do our best to limit out at 6 lobsters per person per day.  There is nothing quite like scouting out and capturing your own dinner for the evening’s repast.  After a few successful days, we may begin to moan, ‘What, lobster……again?????’   While I am not much of a diver I am one good spotter, though pretty much by default since I have the best eyesight; I perch myself on the bow of the boat and watch as GPS-located points come up.  Or, I look for undiscovered spots, usually underwater rocks, coral heads, cuts, holes, or other structures that sometimes just happen to be man-made…..like sunken boats.  The lobsters prefer to hide under cover, or in holes, often competing with the now-protected Goliath Grouper that, before political correctness, was known as a Jewfish.  My divers will head down and stare face-to-face with 30-40 lb. Goliaths who simply won’t move.  The trouble is, they like eating the lobster too.  It is a battle of wills that the Grouper always wins.  They must know  they’re protected….at least for now.