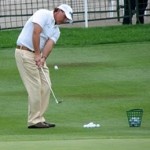 Well worth the time and effort.....

If ever there was an argument for practicing the short game, Phil Mickelson’s performance during the first round at the 2011 Masters is it.

After trying out drivers on the practice range prior to teeing off, Phil finally decided on the 45-inch driver he used last week to win the Shell Houston Open.  A favored 46-incher, which carried the ball about 15-20 yards farther, was benched.   But distance was obviously not Phil’s problem as errant tee shots poked about the pine needles and azaleas on several holes.   Only four tee shots found the fairway.    Poor driving does not promote greens hit in regulation, and though Phil did manage to hit 12 greens, some stellar up and downs kept him in the hunt.

Putting Augusta National’s greens are no easy task but chipping to them is even more difficult.   Mickelson’s superior abilities with the short game are the only thing – besides his experience with playing from similar positions in the past – that kept him in the hunt on Thursday.   Any other golfer would have likely ballooned to plus-figures and called it a day.

There’s a lesson to be learned here:  anyone can play great golf hitting fairways and greens.  But it takes a very special talent to score well when your long game is ailing.   Practice with the driver?  Absolutely.  But do not neglect your game from 100 yards in because that is where you score.   The woods are full of golfers claiming long-game excellence….while shooting 90.