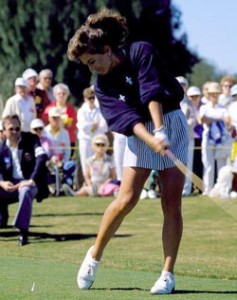 Farr in action, during her short-lived LPGA Tour career.

Heather Farr would have loved this.  Not that anyone would wish to be famous for dealing with breast cancer but that her heroic fight was not lost, not now, almost 20 years later.  If she were alive, she’d be leading the battle with pink ribbons, pink golf gloves, pink everything.

Unless you’ve been on a desert island, you’ll know that this month has been dedicated to breast cancer awareness.  Marches, walks, programs, and sporting events are all trying to bring attention to a very devastating disease which has hit our country as much as anywhere else.  Ms. Farr was only 24 years old when she received the bad news and staved off paying the ultimate price for four years, at age 28.  In her short career, the Arizona State Universty Sun Devil won the U.S. Girls Junior, the USGA Women’s Amateur Public Links, was a Curtis Cup team member and played on the LPGA Tour from 1986 until she passed away in 1993.

All of us have been touched by this dreaded malady and every woman is in great fear of contracting it, me included.  Just a few weeks ago I did go in for my mammogram.  Maybe you gentlemen don’t know what that entails, but it can be very painful for women when their breasts are compressed by a square plastic plate to the thickness of pancakes in order to get a better X-Ray.  I suppose I could tell you to imagine your personal parts being squished beyond recognition and you may begin to get the point.  However, now there is digital imagery and the procedure is faster, much less invasive, and less painful.  Plus, I could actually see the images as they came onscreen and even though my eye is untrained, everything appeared to be OK.  I received my All-Clear within two weeks and was relieved.

Regarding the controversy as to when women should be getting mammograms, the jury is still out.  Generally, it is around age 40;  but consider this:  mammograms save more lives than originally thought.  New research out of Sweden following 100,000 women over 30 years shows that the risk of dying of cancer was cut by 30% by those who received regular mammograms, which translated into 15,000 – 20,000 lives saved each year.   Heather Farr’s case was unusual because she was so young and likely would not have had a mamogram at such a young age; unfortunately there is no more ‘usual’ as the age at which people contract cancer seems to decrease.

Cancer knows no boundaries and no one is exempt.  It can strike people who practice healthy lifestyles just as easily as those who abuse their bodies.  Although there is no foolproof way to prevent cancer, there certainly are ways to lessen your chances of getting it.  For women, it is VERY important to maintain a proper weight because as you age and approach or pass menopause, most of the hormone estrogen comes from fat cells and not the ovaries.  Excess estrogen can spur the growth of tumors, especially in the breast, since it is made up of a lot of fatty tissue.  If you practice hormone replacement, please make sure you are doing it under a licensed professional and not indiscriminately taking estrogen compounds without balancing them with progesterone.  Hormone replacement is risky business and should be practiced very carefully with low dosages and minimal years of use.  Remember that many soy products contain plant-based versions of estrogen and will count toward overall estrogen levels.

The following suggestions apply to men and women alike:

If you smoke and drink alcoholic beverages to excess, STOP IT NOW.  The combination is very deadly.  In addition to the possibility of breast cancer, throat, tongue, and lung cancer can often result from that duo; and, the more you drink, the higher your risk.   I have never smoked and do have an occasional adult beverage, which by all indications is actually good for you.  As an honorary pirate, rum is for me…..but not too much.

Stay active because exercise is believed to lower cancer risk.  Try for 45-60 minutes a day at least 5 times a week.  Personally I try to walk 4-6 miles 7 days a week….and I try to walk and carry my clubs when I play golf.

Eat a balanced diet with a lot of fruits and vegetables – organic and clean if possible – and get your proper nutrients, vitamins, and minerals.  There has been no diet proven to prevent cancer but there’s no need to tempt fate by eating carcinogenic foods you know are full of chemicals, additives, and preservatives.