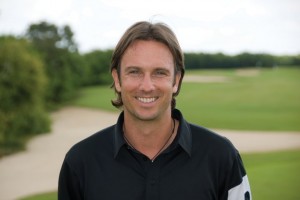 As a low handicapper with a pretty decent swing, it is always interesting to see what a golf instructor will say to improve my game.   In the past, I’ve walked away from clinics with not a lot of helpful information.

But not this time.  Not from the excellent instructors at Fairmont’s Mayakoba Resort, which will host the PGA professionals during the Mayakoba Golf Classic, February 23-27, along the breathtakingly beautiful Riviera Maya.

Dashing Spaniard and Director of Instruction at the on-premise Jim McLean Golf School, Marcos Zuazu knows his stuff.  Utilizing video frame-by-frame split-screens, Zuazu plots your swing next to your favorite player’s and comes up with comparisons as well as fixes.

Looking at Annika’s swing next to mine, there were many similarities but two glaring faults were producing what I term a ‘power leak’…..and not very Annika-like.   Zuazu spotted them immediately.   My left shoulder raised up noticeably on the backswing and that, coupled with an unwieldy right elbow chicken-winging out and depleting a strong wrist angle into the impact zone was enough to rob my power reserves.   Two tips later, the difference was remarkable, with more solidly struck shots.

Coaching the short game, instructor David Lopez provided a fix for pitch and run shots which I sometimes would chunk or skull.  Deceleration can always be a culprit, but in this case, David changed my set-up:  ball back in the stance, eyes almost over the ball with my body crowding the shot, hands pressed forward – with a more closed club face.  Put a simple putting stroke on it, gauge the distance, and I was good to go.

I was able to try out both of these techniques playing the first few holes of the Greg Norman-designed El Camaleon golf course.  On number 1, a superb par-5 complete with a ‘cenote’, or prehistoric cave uncovered – and left hauntingly open –  while excavating the fairway during construction, my third shot was a few yards off the green.  Taking advantage of the opportunity to try my new chipping technique, I easily rolled the shot about a foot from the cup.  Playing partner Kevin Sebulski, Fairmont’s Director of Golf, picked up the ball and gave me my putt as I credited his staff with the shot.

On the third hole, the longest par-4 on the course, my second shot was about 6 feet off the left side of the green.  This time, I opted to putt, leaving the ball inches from the hole.  Again, Kevin picked up the ball and said, “Was that in your short game lesson too?”