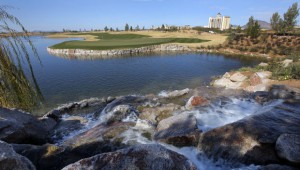 During the fresh start of Spring Training in the Cactus League, all teams are undefeated, while their fans entertain visions of a World Series-capped season. Often escaping cold weather back home, many visitors to the baseball games held in the Greater Phoenix area also flock to one of the 200 plus nearby golf courses, entertaining visions of breaking 90 in fast, dry desert conditions. They are largely delusional on both accounts – – and yet have a fabulous time at the intimate stadiums, eclectic courses and great restaurants.

However, for anyone looking to take a break from the relatively crowded Cactus League scene, there’s another exceptional destination a couple hours to the south – – once the Spring Training home for several Major League teams – – but still a great place for golf, dining, the arts, nightlife and other recreational pursuits.  With a population of about 550,000 and the home to the University of Arizona, Tucson is a relatively remote oasis of the deep Southwest. And it’s where one brand new golf course and another old one even further down the road are worth a break from Spring Training.  But first, a bit about baseball:

Major League clubs began holding pre-season camps in Tucson as far back as 1946, when the Cleveland Indians trained at Hi Corbett Field.  When the Indians moved to Florida in 1993, the expansion Colorado Rockies set up pre-season workouts in the city.  The Arizona Diamondbacks and the Chicago White Sox also trained in Tucson. But by 2010, all had relocated to Phoenix, to eliminate the 120-mile drive – – or four-hour round trip – – to play against the other Cactus League teams.

While Tucson is sometimes erroneously described as “sleepy,” it sure didn’t look that way during a visit last December to the Casino Del Sol Resort, a 215-room high-rise hotel hard by a first-class casino, an amphitheater and the latest addition, a Notah Begay III-designed golf course.  Owned by the Pascua Yaqui Tribe, the resort was alive and hopping on a Saturday night, packed with well-dressed men and women in exceptionally tight and stylish clothing.  The reality of many Indian gaming facilities is the sight of old women hooked to an oxygen tank playing slot machines while chain smoking; Casino Del Sol looked much like the industry’s beguiling television commercials.

The new golf course, which opened in December, now makes the resort a more well-rounded destination.  Fairly new to the design game, Begay has a degree in Economics from Stanford University, where he was a three-time All-American and played on a team that included Tiger Woods.  After winning four PGA Tour events, Begay suffered a back injury that knocked him out of professional competition.  But his experience and Native American heritage made him an excellent choice for the design the Sewailo Golf Club, which means “flower world” in the Yaqui language.

With help from fellow architect Ty Butler, Begay designed a course with three distinct feels, opening with lakes and streams, moving into a desert landscape, and then re-encountering water at the end.  For a resort course it can be remarkably deceptive, with an ultra long par 4 and short par 5.  The front nine plays relatively easy while the challenging back half can bring a score quickly to average.

Some architectural critics complained that with courses closing in the Tucson area, a new track wasn’t needed; and that Begay and Butler moved too much earth, and use too much water for the desert environment.  Of course, that’s not the point of the course. It’s part of the Yaqui  nation, which has its own water rights. It’s meant to complement the resort, and not necessarily earn a huge profit.   And to ensure Sewailo is run in a first class manner, the tribe hired Troon Golf to manage the operation. 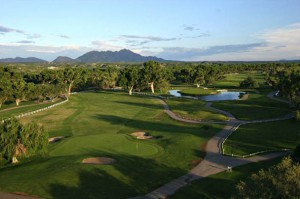 Forty-five minutes further south of Tucson is the resort town of Tubac, an artistic community with a vibe not unlike Sedona in the 1960s, before it was swamped by far too many tourists. Built around and across the Santa Cruz River at the historic Tubac Golf Resort and Spa are three old-school nines, designed in 1960 by the legendary Red Lawrence, who created the first true desert course, the much-esteemed Desert Forest Golf Club in Carefree, near Scottsdale.

The Anza nine is named after Captain Juan Bautista de Anza the II, who commanded the Tubac Presidio for 16 years in the late 1700s.  The Otero nine is named for the family that originally settled the property after receiving a Spanish land grant in 1789.  The Rancho nine, named after a sister course  in Cave Creek, Arizona, earns its fame as the site of a couple scenes from the 1996 Kevin Costner/Don Johnson romantic comedy, Tin Cup.  Here is where Costner, in an alleged US Open qualifier, breaks every clug in his bag but the 7-iron, compelling his caddie (Romeo Posar, as played by Cheech Marin), to temporarily quit.

Good words to live by are those said by Posar to his player, Roy “Costner” McAvoy:  “Look, Boss, I only got one rule, and that’s never bet money that you don’t have on a dog race with an ex-girlfriend who happens to be a stripper.”

Good advice to live by is taking spring break from Spring Training, chilling out in the laid-back resort at Tubac.