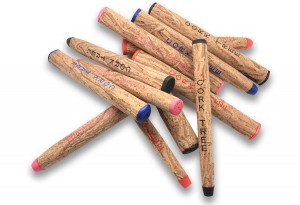 Breaking into the golf gear business is tougher than a rattlesnake that bites Chuck Norris and does not die in agony three days later, which is seriously freaking tough.

After all, most every equipment-related idea imaginable has already been introduced. Major manufacturers dominate nearly every category save for funky tees. And when it comes to grips, the likes of Winn, Golf Pride and Lamkin seem to have the market wrapped.

Today, however, there is a new entrant in putter grips and it just might be different enough to have a chance. Cork Tree, based in the southern Portugal city of Sao Bras De Alportel, has introduced four different models of putting grips that are comprised of what the company’s name suggests – -it’s hand-made from sheets of natural cork that’s lined with fabric to form a type of leather. Exceptionally soft to the touch, the completely natural product remains dry even in humid or rainy conditions.

“That means the grip won’t slip in your hands — regardless of how moist your hands are,” says company co-founder Marc Boggia, a British PGA member since 1981 and a well known course owner, tournament director, golf product distributor and instructor with John Jacobs Golf Schools. “That lets you confidently putt away without any tension in your hands and arms, promoting a more fluid stroke. Once you try it, I know you’ll agree that it feels amazing. Plus, it cleans very easily — dirt wipes away with a wet cloth.”

What’s more, because it’s identical to the cork stoppers used in premium wine bottles, the Cork Tree grips are perhaps the most distinctive looking and stylish new item in the game.

An Important Matter of Feel

One can’t discount the importance of a comfortable putter grip, in that the club is typically used more than any other in the bag. And while such grips are very much a matter of choice and preference – – from its circumference to tackiness – – the cork grips have a remarkable feel.

They are also remarkably light, mainly because cork has a honeycomb cell structure in which each cell is a 14-sided polyhedron filled with air. The bark is, in fact, 89 percent air, just like those trees that shots never seem to get through. Then again, like leaves on those air-trees, the cells in cork won’t let water in or air out, which makes the cork grip waterproof.

There are also a couple of interesting back-stories to these grips. First is the fact that unlike real leather grips that are made from the skin of cows, these are from tree bark that regenerates. It’s arguably a vegan product, since no animals were harmed or sacrificed in the making of the grips. And because the grips included no petrochemicals, cork leather is hypoallergenic and environmentally friendly.

The other interesting backstory is about the company, the nature of cork farming and the temporal side of a long-term business.

Cork Tree was founded by Boggia and Nuno Nasciemento, whose family has been in the cork business for generations. With come 500 hectares of cork oak trees, the Nascimentos continue to sell cork bark to the stopper industry. From his earliest memories, Nascimento went with his grandfather to the family cork oak forest, learning the natural variations of the growing process. He studied and tested trees to find the best cork bark, and experimented with myriad cork products that could be commercialized.

Four Decades From Planting To Harvest

Cork farming is demanding work done mostly by hand on southern Portugal’s rocky terrain. The forest demands almost constant cleaning, fertilizing and replanting. The Nascimento plantation has put in some 40,000 new cork trees in the past eight years, an act that involves a great deal of foresight.  Indeed, the time between planting and an investment payback would make wine growers crazy, and the heads of Silicon Valley investment bankers explode.

From when a tree is planted, it takes more roughly 25 years before the first layer of cork can be harvested. Even then, the virgin cork has little commercial value. It’s used in flooring, isolation boards in construction materials and other fabricated products, but isn’t particularly profitable.

The tree is harvested for the second time about 9 years later, the average time it takes for a mature tree to regenerate the bark on its trunk. Because the second harvest still has too many irregularities for premium wine corks, it also goes into agglomerated products. Finally, nearly 40 years after its planted, does the cork tree yield quality material for wine stoppers and the cork leather putter grips. And while it can be harvest many times thereafter, that’s a long time between returns.

“The investment (we make today) is for the future generations that will come after us,” says Nasimento. “However, we have a legacy now and we care about that. What was left to us we proudly say thanks and we will leave to others that will follow us. Then, they will decide what to do with it.”  The current generation has decided to break into golf.

Cork Tree’s grips are available in four styles, and with each  available in four accent colors. Two of the grips, the Slim Jim and the Gimme, feature the conventional putter-grip shape, with two different degress of taper. For those who favor larger grips, Cork Tree offers the Bandit, which tapers from a chunky 30.8 mm in diameter at the bottom to a slightly narrower 28 mm at the butt end. The fattest grip, which I tested, is the Stumpy, measuring 41 mm at the bottom and tapering to 39 mm at the butt.