When the AT&T Pebble Beach National Pro-Am kicks off this February 10th, be sure to spend time on the Thursday-through-Saturday broadcasts, where a treat awaits as the Golf Channel and CBS coverage is spread over three courses. Veteran viewers have long endured dulcet descriptions of Stillwater Cove, if not increasingly tiresome clichés about the tournament’s eponymous course, a venue perhaps more famous than Augusta National.  Some folks may recognize a couple of holes at Spyglass Hill.  But if you missed its premier last year, check out the scenery and challenging play at the Monterey Peninsula Country Club’s sublime Shore Course. 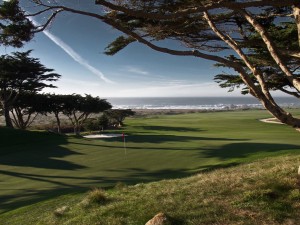 With its Cypress trees, rolling fairways and ocean views, the Monterey Peninsula Country Club's Shore Course is among the finest in the Northern California's kingdom of golf. (Photo by Wayne Freedman)

Without doubt, the Shore is the best thing that’s happened to the AT&T since Bill Murray.

With apologies to the great Ollie Nutt, the president and CEO of the Monterey Peninsula Foundation, which operates the event, this tournament badly needed a dose of new mojo.  Even as its fundraising for charities remains steady, churning out some six million for local non-profits and other youth-oriented organizations, this is as much a testament to Nutt and his volunteers as it is to the PGA pros and the smattering of celebrities who play in the AT&T.  The venerable event – – and the only one on Tour to include all amateurs in the first three rounds and a handful who make the cut in the final – – was losing a bit of luster.

When the likes of Stone Phillips and Joe Kernen are promoted as celebrities, the pickles are coming from relatively deep down the barrel.  Moreover, many of the top-ranked pros either head for the more lucrative Omega Dubai Desert Golf Classic for this particular week, or simply don’t bother to return to California after the Waste Management Phoenix Open.  Most of the missing grumblers keep their beefs semi-private, but it’s apparent that some don’t like the AT&T’s format and many didn’t care for the course that the Shore replaced, Poppy Hills.

The new addition is a tangible and positive change, yet one with a bit of history attached.  Not to get all geezer in this modern era, but the more the AT&T can echo its past, the more distinctive it becomes amongst other tournaments.  But though it is different from any other event on Tour, much about it has changed since Der Bingle beamed up in 1977, during a round of golf in Spain.

Bing Crosby, the actor and crooner who founded the event in 1937, certainly led a charmed life, and as most golfers would agree, right to the very end.  For decades his so-called “Clambake” attracted A-list Hollywood celebrities – – we’re talking Bob Hope, Dean Martin, Jack Lemon and Phil Harris – – catnip to pro golfers of the period and galleries alike.  Played on the Monterey Peninsula’s best layouts, the Crosby rotation included Pebble Beach, the MPCC’s Dunes Course, and its legendary next-door neighbor to the South, Cypress Point.  It’s no wonder that a field of 75 pros and their amateur partners playing over three days had the grandest of times, savoring a climate that could be warm, wicked, or both, and fond memories for fans drawn from throughout Northern California.

Indeed, when the wind howls and the rain comes in horizontally this time of year, the region’s elders still call it “Crosby weather.”

The character of the Clambake inevitably changed when Crosby’s family ceded control to the title sponsor. Spyglass Hill had already replaced the MPCC a decade prior.  And after AT&T put its name and reputation on the tournament in 1986, concerns grew about Cypress Point and perceptions  – – which were not necessarily reality – – about its membership policies.  In 1991, the AT&T replaced the magnificent Alexander Mackenzie masterpiece and its stunning ocean front stretch of closing holes with Poppy Hills, an inland track owned by the Northern California Golf Association.

Although well liked by NCGA members who can play it for $68, professionals were less sanguine about Poppy Hills and its quintet of par fives.  Even with three courses, a field of 180 pros and 180 amateurs led to excruciatingly long rounds, which at times reached six hours, especially at Poppy.  What’s more, after the death of the beloved Lemon, who famously never made the Pro-Am cut to play on the final day, the celebrity star power began to slightly dim.  Clint Eastwood, once an on-course fixture, is now a host of the event, as chairman of the Monterey Peninsula Foundation and part owner of Pebble Beach Resorts.  In years when Bill Murray didn’t show, way too much television time was devoted to Ray Romano and the late Las Vegas Entertainer Danny Gans.

To address tour player complaints, the tournament last year reduced the field to 156 pros and 156 amateurs, which chopped off an average of 40 minutes per round.  While there are far more business executives than celebrity amateurs, this year’s field includes Kevin Costner, Andy Garcia, Kurt Russell, a few athletes, broadcasters and, among others, Murray. And though a generation of golf spectators has come of age without a chance to appreciate the wonder of Cypress Point’s 15th, 16th and 17th holes, the Shore Course is a worthy alternative.

In fact, the original Shore Course was used in the 1965 and 1966 Clambakes.  But what you see today is an entirely different layout, thanks to Architect Mike Strantz, who between 2003 and 2004 totally rerouted and refurbished into a links-type layout, repositioning the holes to blend into the natural terrain while maximizing ocean views.

While the first three holes go inland and have something of a parkland style, with fairways lined with Cypress trees, the next 13 are within the sight and smell of the Pacific, with several fairways separated from the pounding surf only by 17-Mile Drive.

Playing at up the 6,940 yards, the Shore features a number of sweeping doglegs and exceptionally large, steeply contoured and immaculately maintained greens, a definite difference from Pebble.  In fact, while always acknowledging the beauty and challenge of the great course, pros often grumble about the bumpy and unpredictable conditions of Pebble’s smallish and heavily trafficked greens.  In turn, Spyglass Hill is routinely ranked as one of the nation’s top 100 courses, but aside from its first few holes that come near the ocean, its disappearance into the Del Monte Forest renders some of its holes less than memorable, at least for television viewers. 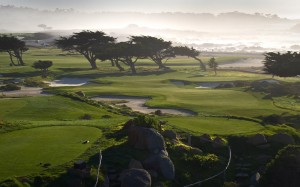 The par 3 11th hole offers the most fascinating shot on the course. (Photo by Wayne Freedman)

After playing the Shore for the first time during AT&T’s media day last month, I believe it has qualities that would arguably make it the field’s favorite.  My moment came on the 11th hole, where to hit from the back tees you climb up a rock outcropping, which offers a panoramic view of the Pacific.  One hundred and eighty-eight yards below on the par 3 is an undulating kidney shaped green, protected on all sides with sand traps and pot bunkers.  The exposure to the wind and an unfamiliar elevation change demanded lots of thinking.  But when my tee shot landed on the green and stopped eight feet from the pin – – and yeah the birdie putt was missed – – I still had an unforgettable highlight of the day.

More important, the Shore course is a legacy for Strantz, an up and coming superstar in the profession who was named 1998 Golf Architect of the Year by Golf World.  In the same year his firm was awarded the contract to renovate the Shore, he was diagnosed with an aggressive form of tongue cancer.  Despite chemotherapy, surgery and an 80-pound weight loss, Strantz moved to Monterey, lived on-sight and convinced the MPCC to not only renovate the Shore Course, but also change the entire thing.

Strantz and his team removed forty-five acres of non-indigenous ice plant.  They re-routed all 18 holes so that – – to borrow a pretentious architectural allusion that’s nonetheless apt – – the fairways seemed to “dialogue” with the ocean’s breaking waves. Although Strantz died in 2005 at the all-too-young age of 50, the Shore is an exceptional legacy.  Moreover, it’s a private course that thanks to the AT&T will be shared with viewers nationwide.