As a youngster Brandon Evans pretty much treated the entire town of Plano as his personal athletic playground, following the seasons as football gave way to basketball, baseball and tennis.  During the 1980s in this Illinois hamlet southwest of Chicago, residents were clearly nonplussed by curious children with sporting exuberance.  So when Evans wandered into Ed Smith’s garage, pulled a golf club from a bag and began whacking the ground in front yard, the homeowner merely smiled at the trespasser and invited him to hit balls with Smith and his son, Eddie. 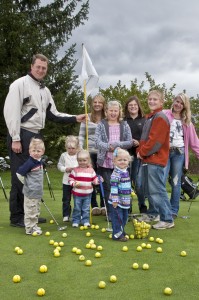 At an improvised driving range on field behind the local YMCA, Evans unsuccessfully tried to make contact for nearly an hour, thoroughly annoying the younger Smith.  But when the boy managed to strike his one and only solid shot, he was as hooked as Hemingway’s marlin.  Back home the kid immediately started begging his parents for $8 to play golf the next day, money for a Golf Magazine subscription, a set of clubs and eventually a membership at a local club, where he worked part time throughout high school.  Today 36, Evans is a PGA teaching professional and General Manager of the Village Greens of Woodbridge, a public daily fee course that’s considered one of the best values in Chicago-area golf.

It’s also ground zero for a remarkable and imaginative program that in just one summer has introduced more than a thousand children to the game of golf – – an echo of a youth’s impertinent foray into a neighbor’s garage.

“The whole thing started when the Woodridge Park District applied for and received a grant from the Illinois Park and Recreation Association, for 10 sets of U.S. Kids Golf clubs,” explains Evans.  “It was contingent on the clubs being available for kids to use for free while participating in something on our premises.”   What exactly that might be would be up to the general manager and his staff.

While Evans admires the First Tee program and the way it teaches life skills and core values, the structured program has a certain formality and requires a significant deal of administration.  Village Greens hosts 23 weekly leagues and is an intensely busy place, and Evans’s personality thrives on informality.  Subsequently, he and his wonderfully named assistant pro, Prince Winbush, thrashed around ideas for an ad hoc way to make use of the U.S. Kids clubs, with setting goals an initial priority.

“We hoped that we could reach a thousand kids during this past summer and I think it was Prince who coined the term, 1000 1st Swings,” says Evans.  “We decided to open it to kids between the ages of 4 and 17, and ‘soft-launched’ the program on our website in late last January and in a March e-mail to the 8,000 addresses in our database.”

From the course owner/operator perspective, Village Greens management didn’t foresee any immediate financial benefit from the program.  It was simply an opportunity to introduce kids to golf by removing several traditional barriers, including the costs of clubs, range balls and the intimidation that’s so common when people think about trying golf.  In fact, the Woodbridge Park District agreed to supply a free bucket of range balls to any child who came while in the company of an adult, be it a parent, grandparent or a family friend.  To sweeten the deal, Evans tossed in free bucket of balls for the accompanying adult.  For kids who showed any interest in continuing with golf, three additional free buckets are provided.

While Evans and Winbush gave some instruction and teaching guidance 1000 1st Swings was purposely designed to make use of parents and other volunteers, and take advantage of the administration and organization of existing youth groups.  Indeed, while nearly 500 children registered directly through the Village Greens website, more than 160 children committed to attend through Park District camp programs.  A boy’s Little League Baseball time signed up, as did several Boy Scout groups and a number of Girl Scout troops totaling 80 young ladies. What’s more, about 40 participants came from a girls’ leadership camp in Chicago.

Teaching kids golf doesn’t require PGA certification, says Evans.  In fact, any adult who knows the sport’s basics can work with children, if only because kids are the greatest students.  “Everything that we adults take for granted,” he adds, “kids think is really cool.”

With younger children, Evans suggests starting by showing them the five things a golfer should have in their pocket when getting ready to play, and what it’s used for.  Kids, he’s found, are fascinated to learn how to put a tee in the ground and balance a ball on top.   They’re intrigued to learn why golf balls have different numbers on them, and get a kick out of personalizing a ball with a mark that readily identifies its owner.  Scorecards are invariable considered cool.

“Take them to the putting green an have them keep track of strokes,” says Evans, “while explaining the difference between par 3’s, par 4’s and par 5’s.”  The fourth item in the pocket is the pencil for writing down their scores.  And finally there’s the coin for marking a ball.  On the putting green, he adds, kids get quickly obsessed with marking balls while taking turns putting.

On the way to the driving range, explain about the different parts of the course and describe what people are doing, such as why they’re yelling  “Fore!”  Evans recommends teaching a swing without putting down a ball, having the kids repeat a basic back-swing, through swing and balanced follow though.  Then, put a tee in the ground and have them try to knock it out of the ground with the club, which will encourage a strong and downward swing.  Explain what a divot is, and that it’s OK to make them.

“Once a kid can knock a tee out of the ground five time a row, put a ball on the tee and watch what happens next,” says Evans.  “It’s awesome.”

Director of Fun and Entertainment

“What I found really interesting, and something that you just don’t see in that many other golf programs, was the ratio of girls to boys,” reflects Evans.  “At least 40 percent of the participants were girls and we may even be close to a 50-50 split.  My best guess for a reason is that many of the girls came in groups, which eliminated the intimidation that a lone girl might feel at a male-dominated driving range.”

As 1000 1st Swings participation grew over the summer, Evans managed to get additional sets of clubs from U.S. Kids Golf.  Used clubs were also donated, and more than a few grandparents dropped off $600 worth of checks to help fund the program.  News of it began to spread through radio interviews, newspaper stories and mentions on blog sites.  “An older gentleman I didn’t recognize, and who wasn’t in our database, came up to thank me and say how excited he was to bring in his granddaughter,” recalls Evans.  “She was six years old and a lefty, and he didn’t have equipment for her.  He wanted to show her the course and ‘this golf thing grandpa always talks about.’”

Folks in the golf industry who know Brandon Evans aren’t surprised by the success of 1000 1st Swings. “He is very passionate about golf and also fully understands the business side of the game,” says John Sheehan, a sales and marketing manager with TapIn Solutions, a firm that helps golf courses design and manage websites and other online operations.  “He has a very strong vision of where he’s taking Village Greens.  For example, many courses rely on photos in their websites.  But Village Greens isn’t scenic like a Pebble Beach or Arizona desert course.  So, their website emphasizes leagues, outings, instruction, events and special deals – – creativity that’s very much Brandon.”

Indeed, while he’s formally the general manager, the title on Evans’ e-mails is Director of Fun and Entertainment.

Although more than 1,100 kids have now taken their first swing at Village Greens, Evan’s is not yet sure how many have actually come back to play the course.  A good many have taken up the offer of three free buckets.  “But we tend to recommend that beginners go to nearby Zigfield Troy,” explains Evans, “a great par 3 course that’s much easier to play.”

There are psychological rewards in starting a youth-oriented program that’s as successful as 1000 1st Swings, including some that are unusually personal.  For Evans the latter came when Eddie Smith, the son of the neighbor back in Plano – – and who lives an hour-and-a-half drive from Woodbridge – – heard about the program and signed up his two young children.  “I was introduced to golf by a well-meaning neighbor and his son,” says Evans with a laugh.  “Our program is now allowing him to introduce his kids to golf.  So in a sense it’s come full circle.”

It’s also a loop that will continue, when Village Greens at Woodbridge starts hosting its next program at the beginning of this summer, called 1000 More First Swings.  “It’s the transition,” says Evans, “before we go for 10,000 First Swings.”