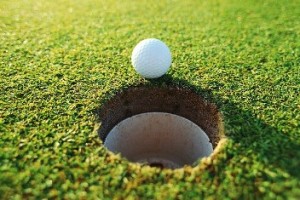 For the vast majority of golfers, there is one sound that is the sport’s sweetest.  Its better than hitting a flushed drive, or a even hearing a notorious tightwad utter, “I’m buying.”  It is aural magic of a Surlyn-covered sphere hitting metal and/or plastic, echoing from the depths of that four-and-one-quarter inch in diameter hole, preferably after a pure and curling right-to-left roll that covers 20 feet.

While few of us will ever be the target of the roar on Augusta’s 18th green for the winner of the Masters, all golfers have at one time or another heard that plunk.  Or is it a thunk?  Or, perhaps, kerchunk?

My friend, Dr. Joe Allen, asked that question the other day.  Just about everything in golf has a name and a dozen or more synonyms, from an ace to a chunk; a hook that’s also called a little snapper;  a banana ball and a breakfast ball, with the latter usually following the former.  But the retired Northern California dentist noted that he’d never heard an official word for the auditory magnificence of a putt dropping to the bottom of a cup.  Me neither.

Golfers make up lots of terms.  We have the “Mukai par,” after our pal who can knock a drive out of bounds only to have it hit a power line and bounce back into playable rough, hack it into a fairway bunker, knock it 100 feet distant from the hole and then drain a chip.  Only Mukai routinely makes Mukai pars, and he does more often than normal odds allow normal golfers.  So around my neighborhood it’s an official term with official meaning.

But what of the noise made by a golf ball dropping into a cup?  It’s a shared and meaningful experience among players of all abilities. While I’ve made up of plenty of words in my day just to mess with editors, I wouldn’t have the audacity to attempt to define this one.  Any ideas?

5 Responses to “Name That Sound”