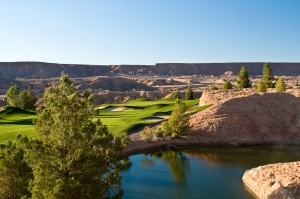 This is the look of golf in Mesquite, Nevada, typified by this shot at the Falcon Ridge course.

The golf industry’s marketing muscles are in full flex this time of year, as new gear is introduced and warm-weather regions buy more airtime than Republican primary candidates, touting courses, food, accommodations and other activities.  From the Gulf Coast to Scottsdale and Hawaii, each makes a good case for what is relatively expensive discretionary travel. However, about 80 miles northeast of Las Vegas is the city of Mesquite, which over the past decade has evolved into a budget-friendly alternative to these more venerable, widely advertised and thus better-known destinations.

Near where the borders of Nevada, Arizona and Utah converge – – and where the Virgin River cuts through jagged, red rock canyons – – Mesquite has golf courses that weave around, over and through terrain that’s arguably as bad as South Dakota’s Badlands.  The fees at most are about half of what’s charged at Sin City tracks.  And the stuff that stays down in Vegas also stays with Mesquite, in casino-hotels that range from very good quality to slightly scruffy, but at rates that are also a comparable bargain.

While gambling is clearly Mesquite’s prime industry, the city of some 15,000 has been taking an increasingly strong run at the golf market. Its Oasis Golf Club hosted a season of the Golf Channel’s popular Big Break series.  Next to the nearby Conestoga Golf Club is the Mesquite Sports Event Center, the home of the annual Re/Max World Long Drive Championship, which is televised in early November and draws good ratings amongst golfers envious of 380-yard tee shots.  And the local marketing association, golfmesquitenevada.com, works with the major hotels and courses to create and promote reasonably priced stay and play packages.

Last December the association also hosted the first Mesquite Media Golf Classic, bringing roughly 80 golf and travel writers from around the world for an annual four-day tournament, which in the previous nine years has been held in Scottsdale.  Sponsored by the CasaBlanca Resort & Casino, TaylorMade Golf, Troon Golf and several others, the event gave a number of these veteran journalists their first exposure to the Red Mesa region of Nevada and Utah.  And also to golf courses with elements unlike any some of us have experienced.

Mesquite has eight golf courses and there are several others within an hour’s drive.  Each tells something of a story, part of which is what makes them memorable.  My A Position colleague, Jeff Neuman, wrote detailed reviews of each, as did my pal Wayne Freedman, a reporter with the ABC Television affiliate in San Francisco.  Their names link to more detailed reviews of each course; I’ll stick with the general arc of the stories.

The first that we played, Coyote Springs, is a Jack Nicklaus Signature course, located about an hour south of Mesquite, off Interstate 15 and out on State Route 168, into a desolate piece of country that’s clearly a long ways from anywhere.  Alas, that was not the intent when Coyote Springs in the spring of 2008.

Indeed, the course was meant to anchor a community spread over more than 40,000 acres, with several more golf courses and  100,000 residents.  Numerous pads for prospective homes are graded in the desert surrounding the course, and yet not a single one was ever built.  The clubhouse is a temporary structure.  Several streams and man-made water falls cut through the course, and most prominently at the road that was supposed to be the entrance to the village; fake rocks and manufactured waterfalls are not normally seen on a Nicklaus design.  The grand idea of the project epitomizes the over-ambitious visions that led to real estate bubble and crash, and yet one that left behind a good and surprisingly viable golf course.

Coyote Springs hosts some 21,000 rounds a year, with green fees that range from $110 and $125, and traffic is picking up over last year.  It is an excellent, well-maintained and challenging course, with a mean slope rating of 141 from the 7,471 tips, and a stout 132 from the 6,215 yard white tees.  The greens feature wicked slopes that are particularly testing when pins are cut on about 20 square inches of flat space, which left 80 golf writers muttering for the next 24 hours.

Two years after Coyote Springs opened Golfweek ranked it among the “Top 100 Residential Golf Courses.”  Since there are no residences nearby, this is yet another reason golf consumers should be wary of publications and their ratings.  Still, Coyote Springs deserves its other high rankings as a public desert course.

The second day of the Media Classic took us to the Falcon Ridge Golf Course, which weaves over, down and through the hills above Mesquite Boulevard.  This was definitely not a Jack Nicklaus design.  Several holes featured tee shots were uphill and blind, with hazards and surprise landing zones.  I also found it the most interesting course we played.  Being able to come back with the course knowledge to deal with those challenges, explained GolfMesquiteNevada’s Cody Law, “is why so many visitors suddenly want to play this one twice.”

Because of the fairways and greens carved into the badlands and huge elevation changes on several downhill tee shots, Neuman observed that, “At times, Falcon Ridge can seem almost too spectacular, too much like one of those “World’s Toughest Golf Holes” calendars.”  And yet, it wasn’t that difficult a golf course.  Once you’ve seen where you need to hit the ball, you’ll want be sure to save time for a second round at Falcon Ridge. 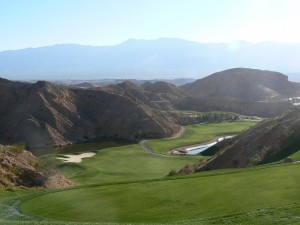 The view from the 12th tee at Falcon Ridge.

Into the Virgin River Gorge

The Coral Canyon course is surrounded by the beauty of red rock walls and Zion National Park.

Day three took us to the sublime Coral Canyon Golf Course near the small city of St. George, Utah, an hour’s drive from Mesquite.  In many ways this was the most physically beautiful course  we played, set in a valley with views of the jagged red rocks of Bryce Canyon and pieces of Zion National Park.

However, the drive from Mesquite alone made the round special. Here is where I-15 disappears around a corner and into the narrow Virgin River Gorge, with the road closely flanked by soaring, striated canyon walls with ever changing colors.  When built in the 1970s, it was considered the most expensive stretch of road ever constructed in the United States.  And it’s what opened southern Utah to Las Vegas and helped lead to the rise of Mesquite.

Designed by Keith Foster, the Coral Canyon course harmonizes with the surroundings.  Indeed, it has giant sandstone boulders, natural washes and a couple holes that pass a huge and long finger of hardened lava.  Rated one of the top public golf courses in Utah, its green fees range from $50 to $100.  While the view alone is worth the drive, Freedman rightly called Coral Canyon “the most pleasant course we played in our four days.”

The final Media Classic course is the 2010 Gary Panks designed Conestoga Golf Club, again right next to town, and yet a completely different interpretation of the landscape than Falcon Ridge.  Many of the fairways seem much more generous than at the other courses, including those with several strategic “islands” in the desert.  Managed by Troon Golf, which guarantees a high level of quality, Conestoga still provided stiff challenges, again dictated by the estimable Mesquite terrain.

As Freedman notes, the design capitalized on “the topography of red, sandstone cliffs, canyons, and high desert washes. If Panks hadn’t laid a golf course through these environs, you might expect to see cowboys, Indians, bandits, and John Wayne carrying a Winchester rifle.”  Well, unlike the operators of Las Vegas golf courses and its casinos, there don’t seem to be many bandits in Mesquite, where the living and golfing is easy, which makes it a Classic alternative and affordable destination.