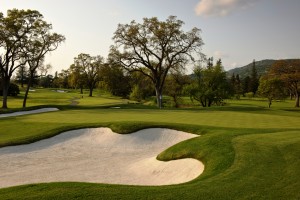 There are plenty of attractions that draw nearly 5 million visitors to the Napa Valley each year, with quality wineries heading a list that includes sightseeing, picnics and shopping.  According to the local conference and visitors bureau, golf accounts for about five percent of the traffic.  But with the recent and ongoing remodeling of both the North and South courses at the venerable Silverado Resort – – which were originally designed by Robert Trent Jones Jr. – – the gold standard of Napa Valley golf is regaining the cachet that in decades past made it one of the coolest destinations in Northern California.

Indeed, the resort still looks straight out of Falcon Crest, the epitome of  luxury in the late 1970s and early 1980s.  That show, in fact, often filmed at Silverado.  Today, in a scene in which Angela Channing would be totally at home, stretch limos line up before the plantation-style white mansion that serves as Silverado’s reception building, taking guests to wine tastings, mud baths and dinner on the town.  The setting recalls the time when the PGA Tour and Champion’s Tour made regular and highly player-popular stops here, for the 1968‐1976 Kaiser International Open Invitational; the 1977‐1980 Anheuser‐Busch Golf Classic; and, the 1989‐2002 Senior PGA “The Transamerica” event, featuring the likes of Jack Nicklaus, Arnold Palmer and Lee Trevino.

Today, a few of the Silverado’s facilities appear as dated as Trevino’s memorable swing.  However, the entire 1,200-acre property is undergoing a multi-million dollar renovation, including the courses and buildings,  thanks to a new ownership group and aggressive management companies.

The ownership team is led by U.S. Open and British Open Champion and NBC golf analyst Johnny Miller, who played here often as a youth and lived nearby on and off for his entire life.  The guest facilities, restaurants and spa are managed by Dolce Hotels and Resorts, while Troon Golf is managing the pro shop and golf operations.  Under Miller’s direction,  Silverado’s courses are being groomed to Troon-quality standards.

With spacious fairways flanked by oak, pine and redwood trees, the North and South Courses meander across 360 acres of valley terrain, with a number of elevation changes and water crossings.  Melded into a magnificent setting, Robert Trent Jones Jr.’s design is pure parkland, as sublime as the Cabernets made along the Silverado Trail that runs north from the resort to Calistoga.  But while Miller has a reputation for designs that aren’t terribly friendly to amateur players, he’s done nothing to the North Course that’s untoward, except to improve and upgrade the Jones masterpiece.

“I’ve played golf at Silverado more often than anywhere else, and I enjoy it as much today as the first time,” explains Miller, who added that for decades he’d been “redesigning this course in my head,” a confession that may or may not please Jones Jr.  “My vision is to bring Silverado back to its former glory so that families, golfers, and groups of all kinds can share the same wonderful experiences that I have enjoyed in the Napa Valley during the last 30 years.”

The first task was a complete bunker renovation on the North Course, with some removed and others added, and with a few new fairway bunkers that put movement into otherwise straight holes.   Most were reshaped and given new drainage and lining, and filled with brilliant white sand from Idaho, which Miller calls “the best sand in the world.  It just makes that green pop.” 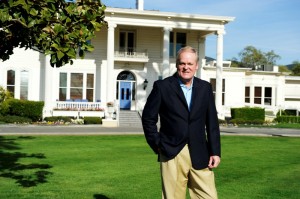 In an effort to improve playability and aesthetics, a turf renovation will minimize kikuyu grass and return the course to its original mix of rye and Kentucky bluegrass condition. New tournament tees were added, lengthening the course from 6,900 yards to 7,100 yards, and a few trees were removed, not that anyone would notice.  Miller has said that from the tournament tees, Silverado’s North Course will be one of the longest and hardest in Northern California.  But with new forward tees that have been moved up, it can also play at only 5,300 yards.   Thus, the North course is now long and demanding enough to once again challenge professionals, but  friendly enough for resort play.

Typical of the changes are a new tee on the fourth hole, which makes the fairway a slight dogleg left, requiring players to shape their drive to reach the best position for an approach shot.  Instead of one bunker guarding the front of the green there are now two, which hide the shallow putting surface from players standing in the fairway.  Players thus have be precise with club selection and bring shots in high.  And though some of the design elements are new to the North, all snugly match the look  of the original course.

Silverado’s large driving range and excellent practice area will also be upgraded.  Improvements to the South Course will include the reshaping of fairway lines, recapturing lost green area, enhanced edging and grooming of bunkers for consistency and playability.  With a parkland feel that’s identical to the North, the refurbished South is yet another pivotal upgrade for a property that actually pre-dates Falcon Crest by an entire century.

Civil War General John Franklin Miller built the eye-catching white mansion with its tall porch columns in the 1870s.  Miller had lived in the Valley for 20 years and served as Napa County’s treasurer before joining the war. Upon his return,  he purchased the land in parcels and named it La Vergne, after a battle in which he fought.  As the Resort guide explains, Miller’s daughter inherited the property and hosted many illustrious guests through the early part of the Twentieth Century, including President Theodore Roosevelt and Gen. John J. Pershing. After passing through other hands the land was sold to the Silverado Land Company in the early 1950s and the mansion was converted into a clubhouse and operated as a semi‐private golf course until it was again sold and developed to include guest accommodations in the 1960s.  Thus commenced the resort’s first golden era.

Silverado today faces formidable competition from the likes of the valley’s upscale Auberge du Soleil.  Then there’s the Fairmont Mission Inn, only 20 minutes away in the equally charming area around Sonoma.  Still, Silverado has a couple of advantages, including the snack shack that’s near the sixth green, which serves Olympic Club-style hamburgers on hot dog buns, arguably the Northern Hemisphere’s best single item of food and who cares what Alice Waters thinks. Moreover, since  no other resort in the area features two world-class golf courses that are coming into pristine condition, Silverado is in the process of recapturing its rightful place as the most gracious resort in the Napa Valley.