The clock is ticking, quite literally in a clever Cleveland Golf website, on a countdown to midnight this coming December 31.  After that moment, equipment manufacturers will no longer be able to make and sell wedges with sharp-edged and square grooves.  Such wide and deep grooves help generate spin and more control on certain shots, especially out of wet rough, and already are no longer allowed in professional events. 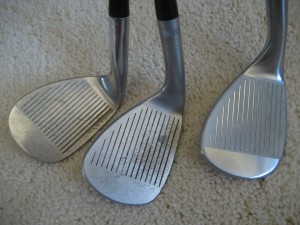 The grooves on the ten-year-old wedge on the left are heavily worn, while the grooves in the three-year-old in the middle are showing wear. The wedge on right is one of the last square grooved wedges available, and won't be made or sold after December 31.

The rules change on conforming grooves is being implemented through a graduated set of deadlines.  It was a move by the United States Golf Association and Royal and Ancient that initially generated some controversy, a bit of uncertainty and today a discernable surge in the sales of high performance wedges that will no longer be available on January 1, 2011.

Professionals are already adapting to lower-volume grooved wedges, the first category of golfers affected by the changes.  Recent PGA Tour scrambling average tables show that 64 players are getting up and down more than 60 percent of the time this year, compared to 37 players in 2008.  The overall average scrambling average of roughly 58 percent, however, is largely unchanged.  This might suggest the grooves make little difference.  More likely is that players are managing their games accordingly, concentrating on driving accuracy more than the “bomb and gouge” strategies that prevailed in the recent past.  Also, those guys are really just that good.

In 2014, all USGA amateur championships will require golfers to use wedges with grooves meeting the new low volume 2010 standards.  But casual players can legally use the pre-2010 clubs and post legal and official scores until 2024.  Consequently, we’re moving into a 13-year break that allows recreational golfers to take advantage of superior spin, which raises a couple of interesting questions.

One, are manufacturers using this impending rule change as a nifty marketing tool, the better to sell players clubs they don’t really need?  And two, does it really make sense for hackers to stock up on the old-style wedges that produce more spin?

The Year of the Wedge

The two-part answer to the first question is most definitely yes and probably no.  Dave Pelz and Jesse Ortiz are currently infomercial fixtures with their Bobby Jones wedges, emphasizing the durability of their particular square grooves and faces.  Like Cleveland, which is also advertising heavily, the Bobby Jones outfit has declared 2010 “The Year of the Wedge.”  And on a weekday afternoon in late August at the Marin Country Club in Northern California, a fitter from Titleist sold 20 Vokey wedges in just a couple of hours.

While equipment sales at on-course shops are down a good 10 percent over last year for woods, irons and putters, one mid-year industry report suggested wedge sales were up by about 12 percent.   According to Cleveland’s Keith Patterson, his company’s wedge sales are running approximately 65 percent higher than in 2008 and 2009.  The equipment industry is obviously doing a good job with its messaging, while taking advantage of the lag-time in the rules change.

All cynicism aside, the arguments for acquiring new wedges are sound.  Next to a good putter, wedges represent the most important kind of clubs in the bag, much more so than regular irons, hybrids and drivers.

For professionals, the best opportunities for kick-in birdies come from within 100 yards, and that means good wedge play.  Amateurs often face getting up and down from bunkers, rough and greenside collection areas more than a dozen times per round, and sometimes more than once or twice on a given hole.  Thus, wedges that can be trusted to go a specific distance with a specific swing are frequently the difference between a happy and miserable round.

The answer to the second question is a qualified yes, despite an August Golf Digest piece in which several experts said the change in groove design wouldn’t make much difference to an average player.  Much, of course, depends upon an individual’s style of play and amount of practice.  And then there’s the part about making a potentially significant investment if the stockpile is to hold up until nearly the middle of the next decade.

However, the most important fact is that most of us ought to be replacing wedges far more often than we do. “If you play three times a week and also spend some time on the practice range, a set of wedges probably should be replaced every year,” explains Shawn McEntee, head pro at Marin.  “The bottom four or five grooves on the face will show the most wear, as will the sole of the club-head, which eventually changes the bounce angle.  Even if you play just a couple times a week the wedges should be replaced every two years, since the metal in most wedge faces is soft and wears down, which changes how well the club performs.”

Grooves in wedges are important because they act like tire tread channels, funneling away moisture and debris so that the face of the club – – like a tire on a wet road – – makes better contact.  Since wedges are quite often used in poor lies, larger grooves are needed to channel the junk found in such places – – places where amateur players typically reside all too often during rounds of golf. 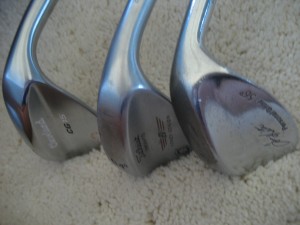 On the right, Ben Hogan's engraved signature is nearly erased by sand and rocks. The sole on the Vokey in the middle is showing wear. The certain damage the Cleveland will experience is to come.

Indeed, my wedges are most always ridden hard and put up wet.  That is, I’m lashing the ball out of sand, dry and rocky creek beds, the Sonoran Desert outside of Scottsdale, thick fescue and dead grass and dirt.  In the photo showing three of my wedges in various states of newness and decline, the Ben Hogan signature etched into the sole of this now-retired old club is almost unreadable, which means I’ve left behind serious metal on a lot of courses.  Simply put, the bounce angle of the Hogan “Tom Kite Grind,” no longer exists.

Of course, the club is still serviceable and would function OK, especially given the quality of my game.  But about two or three years ago, after the shaft of my second Hogan bent and broke in a fatal encounter with buried root, I picked up a pair of Titleist Vokey designs, with their “Spin Milled” technology.  And for the first six months to eight months, I had many short pitch shots hop and stop – – at least with more frequency than the old Hogans.  Of late, however, I need to adjust for pitch shots that roll out more than when I first bought the clubs.  As grooves wear down, the difference that produces spin is something you can hear and feel.

Simply take a toothpick or a pencil point and run it down the face of the club like a stick on a washboard.  Even with the old Hogan wedge, the sound from the upper grooves is sharp, but fades to a very light click near the bottom.  If fact, the bottom grooves on this club are so shallow they no longer hold dirt.  With the Vokey wedges in their third season of play the sound and feel almost the same all the way down, but it’s clear that the lower channels are no longer as deep as when original, while the sole is showing definite wear.  Take my new Cleveland CG-15 wedges with their “Laser Milled” face and patented “ZIP grooves” and the sound is loud all the way down.  Moreover, I’m clearly going to need to routinely clean these faces since the grooves are deep and wide enough to hold sand and dirt.

Oh yeah, the new wedges produce more punched chips that hop and stop, the control of which is going to require some re-training and practice.  And the same is true for pitches with enough spin to prevent them from releasing.  But the clubs perform in the way a new sports car holds the road.

In print and film ads and on its website, Cleveland Golf President and CEO Greg Hopkins plainly states the during “The Year of the Wedge,” this is a golfer’s “last chance” to get high performing wedges that can no longer be made and sold come January 1, but won’t be illegal for another 13 years.  Since wedges clearly wear out, it’s a strong argument for stockpiling.  So, is anyone buying?

“It’s happening here,” says Marin’s McEntee.  “Our club champion purchased a couple backups, as did one of our members who made it into last year’s U.S. Senior Amateur.  I’m hearing some of the players say they’ll use older wedges for practice and regular rounds, and save the good ones for tournaments.”

OK, but let’s do the math and we’ll be conservative:  If you carry three wedges in the bag and each wears out in two years, it means you’ll need at least six sets between now and 2014.  That adds up to 18 wedges and we’ll go with a modest price of $110 apiece.  So with tax you’re talking over $2000, or $4000 if they wear out annually.  Still, it’s a bargain compared to the costs of guns, food and whatever else survivalists put into their bunkered stockpiles.

Put that way, an awful lot of golfers have done much more stupid things when it comes to purchasing equipment.  So, with the clocking ticking down and only a few of months remaining until the deadline, there’s likely only wedge issue remaining.  And it’s how well buying several sets is going to work out for ya at home.