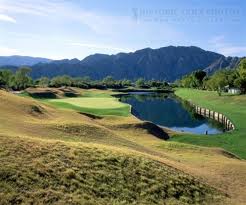 The typical water and mounds found at the Stadium.

I’ve been to the Palm Springs area several times during the past two decades, for a family-oriented Thanksgiving weekend, for a friend’s 60th birthday and on a couple of short golf/business trips.  However, after seven rounds of golf in five days, evenings spent at several of the most distinctive  restaurants in the Coachella Valley, getting a massage at Two Bunch Palms and watching Kessler and Wallach get an old-fashioned shave at the La Quinta Resort’s Havana Club, I’m really starting to get the appeal of the destination.  And on this outing of the Road Warriors we didn’t even get the chance to play tennis – – a sport I enjoy as much as golf – – at what are widely considered some of the nation’s best clubs.

I’ve long understood that the winter climate brings down the snowbirds from wet Pacific Northwest and the cold states to the east. But it’s the abundant recreational attractions that bring visitors from Northern California and Greater Los Angeles and San Diego, none of whom really suffer from Seasonal Affective Disorder from November though February. The quality of golf, accommodations, cuisine and other amenities is what gets them here, and these are as good or better in Palm Springs than in Scottsdale, the closest competitor.  Advantage Southern California, because everything in the Coachella Valley is in a much more compact area.

Our final day started with a golden round at SilverRock.  The penultimate ending of the trip came in the dark, on the 18th hole of the Stadium Course at PGA West.  The final ending was at Arnold Palmer’s Restaurant in La Quinta, where we sat outdoors with our hosts from the Palm Springs Convention and Visitors Authority, the wonderful Joyce Kiehl and the gracious Mark Graves, our company on all but one dinner out on the town.

Kiehl and Graves made our arrangements before we headed out in our sponsored AUR shirts that were packed in our TravelPro Luggage, our new custom-fitted Callaway Clubs from the Callaway Performance Centers, playing the game with Callaway’s new Hex Black Tour balls, and with real time match scorekeeping provided by Grow The Game Golf.  Three resorts provided accommodations – – The JW Marriott in Desert Springs; the Hyatt Grand Champions Resort in Indian Wells; and, finally, the Renaissance Esmeralda Resort and Spa, which is also in Indian Wells.  We had dinners at Tommy Bahama’s Restaurant and Bar; Jackalope Ranch, a trendy bar-be-que; the IW Club in Indian Wells; and, Babe’s Bar-Be-Que & Brewhouse, in the popular The River development.

A Most Diabolical Golf Course 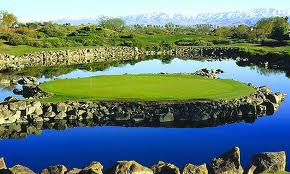 The 17th at PGA West Stadium, known as Alcatraz.

“Golf is not a fair game, so why build a course fair? That’s what Architect Pete Dye said about the PGA West Stadium Course, which has been rated as one of top 100 courses in the world by Golf Magazine, and has been rated number 4 on Golf Digest’s top 50 toughest courses in the U.S.  Dye has been praised for his creative use of railroad ties to hold up bunker walls and the surrounds of ponds, and despised for the same thing.  He’s admired for building courses that generate an adrenalin rush on nearly every challenging hole – – embodied by PGA West Stadium – – and also hated for it.  No doubt the Stadium is a bugger.  At 7,300 yards from the tips, it has the highest stroke and slope ratings of any course in the PGA West complex, at 76.1 and 150.

OK, the railroad ties are starting to look dated, an architectural artifice that’s not quite green shag carpet and avocado-colored appliances, but which is headed in that direction.  On the first couple holes, all four of us GRW’s were initially alarmed at the conditioning of the premium-priced course, which on the surface looked like a scruffy, poorly-maintained muni.  But the Stadium merely appeared that way because of a wise trend now prevalent in the desert, of letting rough and other non-key landing areas go dormant in the winter, to reduce the volume of water needed for irrigation.  The brown rough didn’t play any different than the green areas that received water. 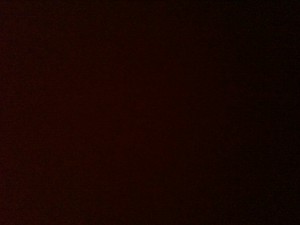 The Golf Road Warriors Palm Springs finish their last round at the Stadium Course after dark.

So we were challenged by long and deep bunkers, hundreds of small pot bunkers that were invisible until you discovered a ball in one, and so many mounds that it was rare to get a level lie.  There were drives that had to carry water, or you’d bail out on a thin and bunker-strewn thread of flanking fairway.  The course has at least 18 risks and each and every consequent reward is simply a neutral safe.  Before we lost all light we did get a chance to savor Alcatraz, the infamous 17th island green where Lee Trevino made a hole-in-one during a 1987 made-for-television “Skins Game.”

Most of the Golf Road Warriors Palm Springs are now home, save for Strawn who continues on an arduous business trip.  It was a fantastic week with great company – – as buddy golf outings should be.  We can only hope that we behaved well enough to get invited back . . .