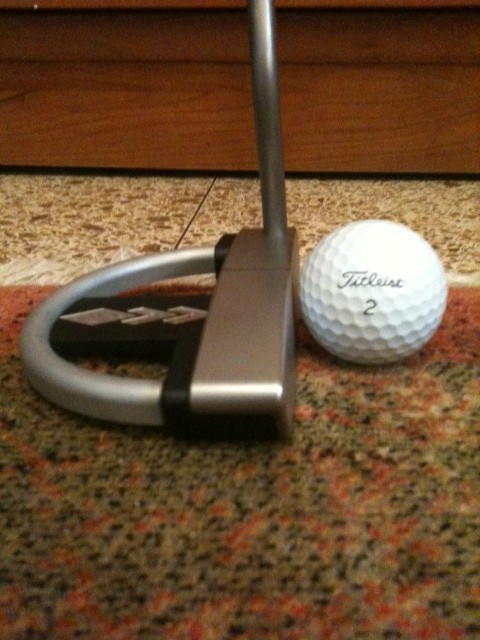 With the weight high on its face, the P2G2's center of gravity contacts the ball at its equator, sending it with a clean and smooth topspin roll.

After 20 years of adjusting off-the-shelf putters to properly fit his students and clients, PGA Teaching Professional Norm Alberigo and the Providence Precision Golf Group (P2G2) are introducing the revolutionary new P2G2® TopStrike® Putter, a club that corrects deficiencies common to nearly all other models.  Featuring patented technology, the clubhead’s center of gravity is high and forward on its face, instead of near the bottom. Energy from a P2G2 stroke is thus transferred directly to the equator of the ball, eliminating hops, backspin and unwanted sidespin even on miss-hits, while producing a clean, pure and true roll.

Conforming to USGA rules, the P2G2 is also manufactured and assembled in Laconia, New Hampshire at Welch Manufacturing Technologies, Ltd., making it one of the few pieces of golf equipment made in the USA.

The head professional at the Agawam Hunt Club in Rhode Island and a former advisor to Bridgestone Golf, the 48-year-old Alberigo has long held reservations about the design of modern putters. “After more than 1,500 fittings with people of all body types, it was clear that a lot of the offsets and lie angles were not remotely correct for the individual,” he explains. “And no matter the shape of the heads, the basics of putter weighting haven’t changed since Karsten Solheim created the Anser Putter in the 1960s.”

Alberigo also found that the shafts of putters were too long for most players, and that heads were too light.  The combination can lead to instability in a stroke, the poor results of which are magnified on today’s fast greens.  Testing existing putters against his design theories, Alberigo made use of Quintic Sports, high speed video analysis equipment.  The putting launch monitor software showed that clubs with a low center of gravity and 4-to-6 degrees of loft often rolled putts with undesirable spin variables.  With only 2.5 degrees of loft, about 400 grams of weight and a high center of gravity, the P2G2 prototypes rolled putts consistently straight and true.

In other words, the tests confirmed that a lip-out could be blamed on the putter instead of the golfer. Says Alberigo: “We can honestly tell players of all levels ‘this is not your fault.”

I’ve been personally testing one of the TopStrike models with a belly-putter shaft – – seen in the photo above – – that Albergio had delivered to me while I was the Golf Road Warriors trip through Palm Springs. I put it into play at the sublime Shadow Ridge golf course and almost immediately adjusted my lag-putts to its weight and feel. Balls came off the face, as promised, with no hops or side-spin – – just topspin roll. The next day I loaned it to colleague John Strawn at the Indian Wells Players Course, who putted unusually well with it he actually won back money from Jeff Wallach. For awhile it looked as if violence would be the only way to pry it from his hands.

Fixing Tiger, in The Year of the Putter

While there are prophets of doom who believe the Mayan calendar predicts the world will end in 2012, Alberigo is convinced that it’s actually The Year of the Putter. “Many top players feel they’ve exhausted their hopes of making a consistent, stable and efficient strike with putters that haven’t fundamentally changed in 40 years,” he says.  “Even young players are trying non-traditional length shafts, and manufacturers are experimenting.” It also appears as if the USGA and the R&A will take a pass on banning the alternative putters.

Critics of alternatives claim that being able to anchor the shaft against the body provides an unfair advantage. Alberigo strongly disagrees. “Long putters perform better, but not because of the anchoring. What provides stroke stability for belly and long putters is the mass and weight of the larger club-heads. Now, add in a high center of gravity on the face—and a loft of less than three degrees—and you can see why we believe P2G2 is going to lead this trend.”

Moreover, with all due respect to the current popular designs on tour, Alberigo believes he can help many of the top players who struggle on those pesky five to ten footers. “Many of the top players’ misses have a direct relationship to their chosen putter designs. I know that there are misses where they have executed perfectly but the design encourages spin characteristics associated with the miss. Inside of ten feet—on tour speed greens—requires the putter head’s stability to be at its highest state.  This is what separates our design. We believe that putts missed would have been holed with our design.” Albergio also observes that Tiger Woods might be getting 30 rpms of sidespin on some of his short putts, which is why Woods just missed so many on the edge early in the PGA Tour season.

Manufactured of 300 series stainless steel, titanium and aircraft-grade aluminum, the P2G2 TopStrike comes in three different models, all with a proprietary herringbone patterned, face.  All models come standard with a stainless steel body, aluminum sole plate and titanium hosel.  The Model 2025 is a standard blade putter, and the Model 2225 has a body and face identical to the blade, yet on its rear is a rectangular strike plate with arrows to provide extra visual alignment for a stroke path. Model 2425 is identical to the 2225, only with an additional semi-circle balance ring in the back, which gives it a complete mallet look.

While the three putters might initially appear different, they flow from a true modular design. All have the same chassis, but come with added options. The blade sells for $250; Model 2225 costs $275; and the Model 2425 mallet goes for $295.

Since the clubs are available only from Providence Precision Golf, the company recommends that buyers use their web-based “Custom Club Configurator.” First, select the desired model, right or left-handed. Second, with your current putter take a stance and a normal grip, and with a standard yardstick measure the distance from your bottom finger to the ground. Do it three times to find an average, which will likely be between 20 and 30 inches. Also enter your height, and decide if you want a standard, belly or long putter. These measurements enable P2G2 to create a putter with a shaft length and corresponding lie angle that facilitates a smooth pendulum stroke.

The TopStrike putter is guaranteed to meet your expectations or P2G2 will refund the full purchase price, with no questions asked, within 90 days. Moreover, standard orders can also be custom configured within 90 days for only the cost of shipping charges.  For more information, visit www.P2G2.com.