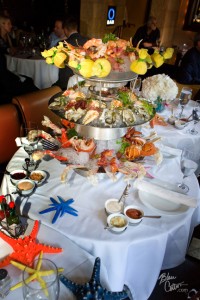 Following our first night’s excellent meal at the Phoenician’s Relish Burger Bistro – – reviewed elsewhere on the Golf Road Warriors Scottsdale 2012 website – – dinner hour got downright serious. We consumed Great Cat quantities of meat, chicken, and seafood, quaffed beverages like a Dromedary pulling into Timbuktu, and still found belt-bulging room for exceptional desserts.  While our generous hosts were kind and attentive, we suspect they treat all of their guests in the same manner.  Consequently, for travelers to the Sonoran Desert, these five restaurants comprise an eclectic week of superb dining:

Mastro’s Ocean Club – – Just across the street from the Westin Kierland and near several other major resorts, the Ocean Club is absolutely packed seven nights a week, as tourists, convention-goers, locals and celebrities – – think Alice Cooper – – jostle for tables at one of the coolest establishments in town.  Excellent live music in the bar area sets a tone for food that’s refined, varied and presented with flair and style.  Our meal started with the restaurant’s Signature Seafood Tower, which included huge shrimp, oysters and crab legs on several layers of ice, and ended with several dishes including Mastro’s near-legendary Warm Butter Cake.

The original Mastro’s Steakhouse was a family-owned restaurant in another part of Scottsdale.  Now headquartered in Woodland Hills, CA, Mastro’s has three locations in Scottsdale, six in California and restaurants in Chicago and Las Vegas.  Because each is a certified hit, the company has plans to expand to other cities.

They’ll no doubt continue to succeed, given the quality we experienced.  From a special menu prepared for the Golf Road Warriors by Director of Events and My New Best Friend Tanya Queen, several of us choose the petite filet, a perfectly cooked steak, while others selected the Scottish Salmon, which could be prepared several different ways, including blackening.  The lobster-mashed potatoes were irresistible, as was the tall chocolate layer cake sitting next to the Warm Butter, all of which could be topped with thick whipped cream.  This, and the memorable service, is why Mastro’s is so frequently ranked by food critics as one of the top ten steak and fish houses in the country.

The Brat Haus– –  Open only since last summer, this Old Town Scottsdale brats and beer emporium has rapidly earned a reputation as a not-to-be-missed dining destination.  While there is indoor seating available, we remained outside in the urban European-style Bier Garden, at a picnic table next to a warming fire.  Starting with Belgian fries and a spicy brat smothered in homemade sauerkraut, what looked like a casual meal was anything but. 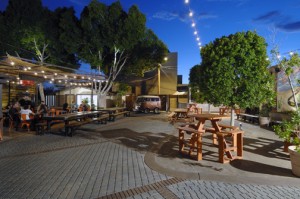 Dining out in the Brat Haus patio.

That’s what we learned from Chef Partner Payton Curry, a passionate foodie who incorporates fresh, seasonal and local ingredients into Old World dishes.  Indeed, Curry took us on a tour of his kitchen and cooler, where sausage making could clearly  get a much better reputation.  Along with Owner Dave Andrea, Curry has made a great effort to speak with guests who crave dishes “like Grandma used to make,” and to develop new takes on traditional staples.  Fried chicken and waffles, for example, is one of the Haus specialties, along with pork schnitzel and sauerbraten beef short ribs.  The beer selection to wash it down is huge and robust, making the Brat Haus a perfect place for a buddy group’s night out.

deseo, at the Westin Kierland Resort – – Inspired by award-winning Chef Douglas Rodriguez, this upscale Nuevo Latino restaurant combines cuisine from South America, Cuba and elsewhere into creating dishes one simply doesn’t find elsewhere in Scottsdale.  The restaurant’s name means “desire” in Spanish, and it tends to define the unprecedented approach to Latin cooking.  With an open kitchen encompassed by seating at a bar, patrons can watch the chefs prepare ceviche specialties and more. 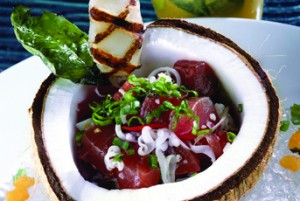 A Thai and Latin influenced cevice epitomizes the fare at the Kierland Resort's deseo.

Along with the excellent food and beverage is the restaurant’s artwork, all created by Nelson Garcia-Miranda, a former deseo dishwasher who is now its artist in residence.  Born and raised in a poor neighborhood in Cuba, the 65-year-old painter, who works in acrylics, was fairly well known in his native land for his opposition to government policies. But after reaching the U.S. some 13 years ago, he was forced to take a job washing dishes in Miami and later Arizona.  One day, he mentioned to chef Robert Madrid that he was an artist, and soon thereafter Garcia-Miranda received the unusual promotion in 2007, and is now part of the living mythology that characterizes much of the Kierland Resort.  You can find Garcia-Miranda in the restaurant lobby five evenings a week during happy hour, painting in what he calls the “Cubanidad” style.

Orange Sky, at the Talking Stick Resort – – An award-winning restaurant that’s earned praiseworthy reviews from the Arizona Republic and Arizona Business Magazine, Orange Sky sits on the 15th floor of the Talking Stick Resort and Casino, a huge facility with a 360 degree view of Scottsdale.  It offers pan-seared 17-ounce rib-eye steak, Maine lobster Chile Citrus Based Veal Chop, and Alaskan king crab legs, part of a sophisticated menu. The restaurant was packed on a Saturday, with well-dressed patrons who wore unusual amounts of sparkling attire and accessories. 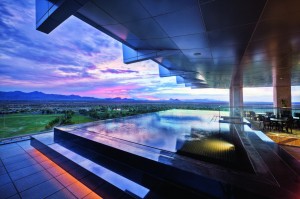 The view from Orange Sky is, simply, outstanding.

We loved Talking Stick’s golf course.  We loved our rooms. We were a little mystified by Orange Sky. The restaurant’s sommelier was very knowledgeable.  And yet, there seemed to be as many servers as diners, and layers of supervisors to watch them, as they walked briskly and purposely through the room, but never stopped at our table to refill water glasses.  Our entrees were OK, but not when priced above $30.  Having said that, if you’re a guest at the resort and don’t want to leave the property for a substantial dinner, Orange Sky makes up for the mystification with its views – – of Scottsdale and the intriguing show put on by the other diners.

El Chorro Lodge – – An Arizona institution since 1937, the El Chorro was originally built as a school for girls just three years before Jan and Max Gruber purchased the property and converted it to a restaurant and lodge.  It’s a place that used to attract the likes of Clark Gable, Milton Berle and other celebrities.  But while some of the indoor-outdoor dining spaces have been expanded and modernized, El Chorro gives one the feeling of going back to an earlier time. 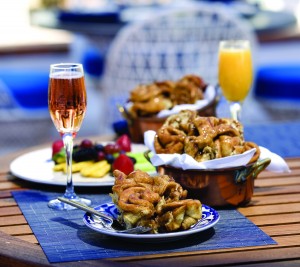 With gardens, fire pits and an outdoor bar, El Chorro features innovative seasonal cuisine, including herbs and produce grown on the property, prime New York steaks from Niman Ranch, trout almandine, and free-range roasted chicken.  I had some of that chicken in a very savory pair of enchiladas.  And it is famous for its sticky buns.  But along with the excellent food, El Chorro is in an iconic setting, with supremely views of the flanking Camelback and Mummy Mountains, which spectacularly change colors as the sun begins to set.