Like an accelerator that propels charged particles into atomic collisions, converging economic and social trends are smashing one of golf’s more tightly held traditions.  How else to characterize the rise of Boxgroove.com, an upstart online start-up that puts non-member players on a growing number of accommodating private courses?  Drilling holes through formidable walls that long embodied genteel privilege, the breech just might be a change of biblical proportions, a devolution leading to human sacrifice, dogs and cats sleeping together, mass hysteria.

Or with apologies to the Ghostbusters’ good Dr. Venkman, it could be that Boxgroove.com represents a sober dose of country club pragmatism, a reluctant-but-necessary concession in a world that’s turned an entire sport upside down. 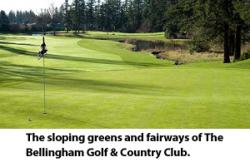 Indeed, since its formation by Seattle-based Entrepreneur McRedmond Morelli less than two years ago, Boxgroove.com has signed up more than 200 private courses in 34 states, nearly 2,500 individual golfers and to date have booked nearly 27,000 tee times.  Given the tradition-driven nature of the nation’s 4,400 private clubs, landing nearly 5 percent of the market in such a short time is fairly remarkable.  Headquartered in Columbus, Ohio – – which is where Morelli lived before moving back to his native Pacific Northwest – – Boxgroove.com is tapping into the gestalt now gripping this segment of golf.

“On average, about 40 percent of private club tee times are unutilized,” explains Morelli.  Like hotel rooms and airline seats, a tee time is a perishable commodity; left unfilled, the income opportunity is forever lost.  And as the hotel and airline industries have learned, utilization rates much below 75 percent makes a business nearly unsustainable.  “At private golf clubs,” he continues, “the trend is leading to higher dues and assessments for members, a drop in the value of their membership, and reduced budgets for course maintenance.”

To improve “yield management,” clubs in the Boxgroove.com network offer up tee times through the company’s website, posting available dates, times, price and the maximum size of the party, an attempt to earn revenue from what would be unused times.  Unlike tee-time aggregators that simply present available times to anyone who signs up, however casually, Boxgroove.com enables its members to request times – – and for clubs to say yeah or neigh. While Boxgroove.com golfers are allowed to play these courses without being accompanied by regular members, the system gives the clubs direct control over who and how many non-members are allowed on the course on any given day.  This new form of reciprocity, Morelli argues, generates much-needed incremental income.

In return, Boxgroove.com puts golfers onto quality courses that in the past would not have been available.  It offers two membership categories, the first of which is called the standard and comes free.  Upon registering, it allows golfers to purchase tee times at private clubs in the network for $19.95 per booking.  That also allows a golfer to bring three paying friends to that time. A solo booking costs only $9.95.  The second category is the “value membership,” which costs $49 per year, a subscription that allows those members to avoid the $19.95 booking charges.

Boxgroove.com collects green fees via credit card and remits monthly payments to clubs.  Its revenue comes from the booking fees, while the clubs collect standard guest green fees, with a probable range of $75 to $150 per player. It is obviously not a discount website.

It is also still a start-up, with a new value proposition that may or may not catch fire.  The idea seems like an entirely sensible arrangement.  But it’s a radical and even desperate move for clubs that once epitomized affluence and exclusivity.

No one knows exactly how many private clubs are opening to public play. “Other than anecdotal stories, there is no reporting mechanism that could help us measure this,” explains one golf industry analyst.  “Most private clubs are secretive to begin with.  Widely announcing that the club is courting non-member players would likely curtail any hopes of gaining new members. And there may be clubs allowing some public play where some of the members don’t even know.”

The trend is certainly evident in Northern California, where the Sacramento Bee has since 2008 published several reports on high-end private clubs opening gates to non-members, including Winchester, Grays Crossing and several other premium tracks in the High Sierra, Reno-Tahoe region.  Most of the clubs characterized the move as temporary, although industry observers consider it a one-way and irreversible street.

The National Golf Foundation estimated that in 2009, 140 of the nation’s 16,000 golf courses closed, as opposed to 50 new openings.  The trend is probably no better this year.  About 5 percent of the courses in Arizona’s clearly overbuilt market are showing clear signs of fiscal difficulty, while some reports indicate that 15 percent of all U.S. courses are “at-risk.”  While the percentage of closures is small, it still adds up to roughly two courses per week, putting golf at an existential inflection point. 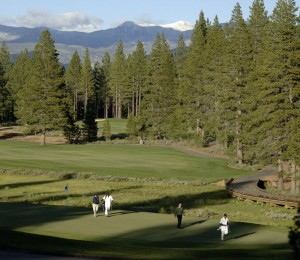 Gray's Crossing, in a Rod Hanna, Associated Press photo that appeared in the Sacramento Bee.

The course-building bubble of the 1990s is a big factor underpinning the trend.   Another is that the total number of golfers has dropped by nearly 10 percent in the past five years.  Worse, the number of golfers between the ages of 25 and 44 has dropped by more than 25 percent.  Cultural and lifestyle shifts may keep many in this cohort from engaging in the game, at least until their kids are grown and gone, when careers wind down and retirees have more time for a four-to-five hour round of golf.  With kids in year-round sports programs, few of today’s dual career families have time for golf, or the time and money private club.

Private courses have also been hurt more by high-end daily fee courses, which promise the “country club for a day” experience. (It’s not really authentic, since the staffs at real country clubs aren’t as obsequious as the overly enthusiastic folks are at many expensive public courses.)  Still, with the demand for and the value of memberships falling pretty much everywhere, change is being forced upon private clubs.

Since Your Pro Doesn’t Book Your Flight to Chicago . . .

To Morelli, Boxgroove.com is simply a more open, sophisticated and profitable way of managing non-member play that is already occurring on private courses.   Traditionally, non-members have access to private clubs in three ways. First, non-members use private clubs when a club member hosts them as a guest.  Second, most clubs accommodate corporate and charity golf outings, usually on Mondays when the club is closed to members.  Then there’s the traditional reciprocity, arranged with a phone call from one golf professional to another, a subject that Morelli obviously considers a reprehensible anachronism.  In fact, it makes him talk louder, faster and with the zeal of a revival-tent evangelist.

“Who calls their travel agent anymore to book a flight to Chicago,” he asks.  “So why do I, as a country club member with a 7.3 index, have to call my golf pro if I want to play at a club in Chicago?  Why can’t I use the Internet like I do when buying a plane ticket or hotel room on Expedia?”  Good point.

Morelli says he spends 12 to 14 hours a day on the phone, trying to convince general managers of the wisdom of joining Boxgroove.com.  Not all club managers agree – – and for good and specific reasons.

“We’ve looked at Boxgroove.com and understand the merits, but don’t feel that it’s right for us,” says the GM at one Northern California country club.  “Because we like to keep tee times open for member walk-up play, we discourage reciprocals, and in fact hosted less than 20 during the past year.  Having our professional control the process through telephone calls, however-old style that seems, works for us. The marginal revenue that we’d potentially earn from outside public play just isn’t worth ever turning away a dues-paying member.”

Morelli sees a way around this issue, in that his site encourages members who belong to private clubs to network and book off-system tee times for each other.  “There’s no reason people in private clubs can’t share with each other,” he says.  “Our site becomes another avenue in today’s electronic social interaction.”

Barbarians at the Gate: Expectations, Behavior and Feedback

Right or wrong, private facilities hold reservations about the ability and behavior of golfers unaccustomed to country clubs, where the pace of play is usually brisk and tossing a club in anger or driving a cart too close to a green will get you a dreaded letter from the GM.  There’s no argument that public golfers are the heart and soul of the sport.  But there are golf-specific reasons why rounds take five or more hours on many municipal or daily fee courses, and why those who can afford it choose country clubs as their primary golf venue.  Granted, class and status motivate some private golfers; for most it’s all about a fast round on a well-maintained course.

Consequently, Boxgroove.com puts a great deal of emphasis on how much control member clubs are given, including the ability to manage the type (country-club player vs. non-country-club player), caliber (handicap) and location (in market area vs. out of market area) of golfers to which tee times will be extended. Further, the club can control the number of times per golf season non-members are able to play their course.  The screening measures are supplemented by a player feedback mechanism. Network visibility to each golfer’s feedback ensures players will abide by course rules if they wish to continue golfing within Boxgroove.com.  Like a seller on eBay, a boorish golfer can earn a very poor and very public reputation. 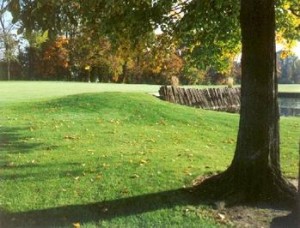 Little Turtle Golf Club in Westerville, Ohio, is one of Boxgroove.com's featured courses.

“When a player makes a tee time, all of the club’s rules and expectations are made clear,” says Morelli.  “If it says wear slacks and you show up in cargo shorts, you’re not going to get on the course and will probably be embarrassed while spending a lot of money on slacks from the pro shop.”

For managers and members of private clubs, accepting public play is a major concession, but perhaps a response to the inevitable.  For municipal golfers who despise country clubs and wouldn’t set foot on one under any circumstances, a sense of schadenfreud is coursing happily across cranial neurons.  For golf, this could be the first little lurch of a tectonic shift.

“Ten years from now, everything we think and know about private country clubs is going to be different,” insists Morelli.  “The Olympic Club won’t change.  But many others will.”

Traditional clubs that meet the needs of young families – – as opposed to those that provide only golf – – have a fighting chance at maintaining the status quo.  By offering tennis, a workout facility, swimming, summer youth programs and baby-sitting services, the clubs become the center of a lifestyle.  When children grow up and jobs are no longer as demanding, the aging members will have more time for golf.

At other private clubs, members are already growing accustomed to seeing strangers changing shoes in the locker room.