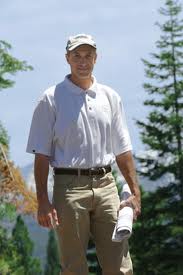 I’ve reached the age where I’m not particularly surprised or shocked when someone younger than myself dies unexpectedly, even from natural causes.  But the sudden passing of John Harbottle III on May 24, at the age of 53, did knock me off-stride. He was tall, slender and produced more energy than the Grand Coulee Dam, a working golf course architect who had a full load of business even in these troubled economic times. And I once had the honor of working with him, before and during the renovation of the course at the Marin Country Club.

Born and raised near Tacoma, Washington, he grew up in a golf-oriented family and was life-long member of the Tacoma Country Club. Harbottle initially attended Seattle University, where he played on the golf team.  He then transferred to the University of Washington, graduating with a degree in landscape architecture.  He began his career working for Pete Dye, before founding John Harbottle Design of Tacoma.

Frequent travel to Scotland enabled Harbottle to study golf’s traditional designs, which informed his own.  He once said that, “Our goal is to create natural looking golf courses with a links touch; timeless classics that fit the terrain as if they have always existed. The indigenous character of the links courses makes them not only appear a natural part of the landscape, but also allows them to function as a sustainable part of the ecosystem.  Great courses possess natural beauty, strategic hazards and variety – not only in overall design, but also in the ways to play each hole.”

Harbottle designed nearly 20 new courses, many noted for their environmental sensitivity, and for their award winning design.  These include  Idaho’s Ridgecrest Golf Course, Stevinson Ranch in California, The Olympic Course in Washington, Schaffer’s Mill in Truckee, and among others, The Golf Club at Genoa Lakes in South Lake Tahoe.

Harbottle was a master renovator of existing layouts, which is why he was hired for the restoration of Marin. Built in 1957, the parklands style course looked good on the surface, but had an outdated infrastructure that made it difficult to maintain.  From the beginning, Harbottle said he wanted to modernize the course, but did not want it to lose the intrinsic style of the original layout.

In the run-up to putting the remodel – – and a sizable assessment – – to a vote by the membership, I worked closely with John and our superintendent, Kevin Pryseski, on a communication plan that answered every possible question, challenge or reservation in advance.  We’d be closing the course for nearly a year. But it was the only way to get the drainage and irrigation done right, rebuild the greens with a Sub-Air system, and change the turf from poa to a much better rye.  The proposal passed with 66 percent of the members in favor.

During construction John also used my one and only suggestion, albeit not related to playability or architecture.  The downhill slope from the fourth tee to the fairway had always been steep, bad for my knees and a place where on wet days I’d seen several people slide down on their butts.  I mentioned it on a walk-around and John had his shaper ease the grade.  It’s a little thing, but I still think of him every time I go down that hill.

Many other members think of Harbottle, and not always kindly, when they land in the fescue he used to frame Marin’s bunkers. Pryseski has reduced the height of the thick grass, but it certainly puts a capital H in hazard.

While awaiting a flight at the Los Angeles International Airport, Harbottle complained to colleague about pain in his neck and shoulder.  He went to a nearby airport terminal massage center, and abruptly died shortly after sitting down, apparently of a heart attack.

“Losing John is difficult to accept,” said  Bob Cupp, president of the American Society of Golf Course Architects  “We were all together just days ago, with he a familiar and welcome face at the ASGCA Annual Meeting. This is a devastating loss.”  Indeed.

Harbottle is survived by his wife, Teresa, and children, Johnny and Chelsea.

One Response to “The Grace And Energy Of John Harbottle”