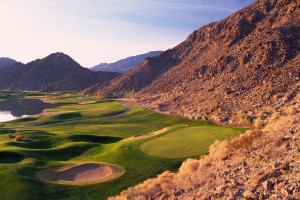 At this time of year the good people of the Pacific Northwest are absorbing more precipitation than they shed, a spiritual soaking as depressive as the region’s relentless slate-gray skies.  Across Minnesota and Wisconsin yet another snowstorm could be the final straw that sends even stolid Lutherans overboard, perhaps into a crazed and bloody tribal war against Episcopalians, waged with shards of broken hot dish and bombs of fetid lutefisk.

At this time of year, folks living in upper North America are in dire need of Palm Springs and entire the Coachella Valley, where winter is warm, dry and seasonal affective disorder is but a distant memory.  What’s more, if this once-sleepy city was sweet enough to attract the likes of Frank Sinatra, Bob Hope and Dean Martin – – who could have chosen to lead the high life almost anywhere – – the venerable destination clearly has even more going for it today than good weather.

Indeed, during the last week of February, the Golf Road Warriors will be rolling into Palm Springs, playing golf at several of the Coachella Valley’s 110 courses, sampling meals at its finest restaurants and sleeping in the most comfortable accommodations in this part of south-central California.

Located about 110 miles east of Los Angeles, Palms Springs initially became a fashionable resort destination in the 1900s, particularly for “health tourists” with afflictions that subsided in dry heat.  While it used to be largely deserted in the tepid summers, the city today has a permanent population of around 45,000.  Other rapidly growing communities now sprawl to the south, including Desert Hot Springs, Palm Desert, Rancho Mirage, La Quinta, Indian Wells, Cathedral City and Indio.  Still, Old Palm Springs – – where Sinatra lived – – has perhaps the best climate, shaded in late summer afternoons by the San Jacinto Mountains, which in turn block cold winds during winter.

It was the climate that initially attracted Hollywood movie stars to Palm Springs in the 1920s.  Amenities soon followed.  Over the years, wealthy winter fugitives funded innovative architects, who designed leading edge “mid-century” and “desert modern” homes, many of which still stand in the oldest section of town.  Golf also boomed; in 1960 the area had less than 20 courses.  Today the desert features such gems as the fabled Mountain Course at the La Quinta Resort, the Indian Wells Golf Resort, Silver Rock Golf, Shadow Ridge, the Golf Club at Tierra Lago – – all of which the GRW will play.

(Aside:  I played Silver Rock a few years ago and was fascinated by what was clearly a waterline on the side of the mountain flanking the fairways, a good 20 to 30 feet above.  Turns out to be evidence of prehistoric Lake Cahuilla, which was created when the lower Colorado River shifted course and filled the Coachella, Imperial and Mexicali valleys in the centuries before the Spanish arrived. Native peoples subsisted on freshwater fish and other creatures around the lake.)

We’ll be staying at three resorts over seven days, including the JW Marriott Desert Springs Resort in Palm Desert; the Hyatt Grand Champions Resort, Villa and Spa in Indian Wells; and, the Renaissance Esmeralda Resort and Spa, also in Indian Wells.  Moreover, we will be subsisting on nightly dinners planned at a selection of fine restaurants, and where it’s doubtful the menus will include either hot dish or lutefisk.