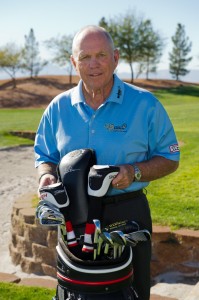 Butch Harmon at his academy in Las Vegas.

The major golf monthlies are absolutely chock full of illustrated tips, fast-frame photographic features of perfect swings, and page-after-page on ways to improve one’s game. From Ben Hogan’s Five Lessons to Tiger Woods’ How I Play Golf, books of advice are perennial solid sellers, with Dave Pelz and Phil Mickelson each covering the short game, while others devote entire tomes to Zen, positive thinking and perfect putting. Players travel to golf academies and spend gazillions on lessons.

So if instruction really works, why aren’t we all shooting par, instead of sucking like a Dyson vacuum?

Well, it’s because golf is an incredibly difficult sport with so many different components to performing well, evident in a new, four-hour two DVD set called Butch Harmon on Golf, in which the legendary instructor covers all of the basics of ball striking, faults and cures, several different ways to get out of bunkers, off hardpan and successfully manage difficult lies.  With 57 different “chapters” and more than 250 specific tips, Harmon demonstrates basic golf techniques in clear language and by example.  He also includes some awfully nifty tricks, like setting a head cover next to a teed-up ball, forcing a slicer to make an inside-out swing instead of coming over the top, in a way that doesn’t require a complicated explanation.

“Presented by Titleist,” the DVD set is available in six languages, including English, Chinese, Spanish, Japanese, French and Korean, which will likely surprise people who didn’t know Harmon was fluent in so many tongues.  It costs $79.95 and is available at  http://www.ButchHarmonDVD.com. A second set can be purchased for only $69.95 and will include free shipping. The set also has a Facebook page: http://www.facebook.com/ButchHarmonDVD

Another section of the DVD features interviews with several of Harmon’s most successful students, with interviews and practice sessions with the likes of Ernie Els, Adam Scott, Dustin Johnson and Tiger Woods, the latter of whom Harmon coached from 1992 to 2004.  In the DVD, Freddy Couples, for example, says that the he considers Harmon the game’s best instructor “because he’s very tough on his students.  I say that politely, but he’s tough on his players. And he has an excellent eye for a golf swing.”

Here too is a fascinating conversation between Harmon and Phil Mickelson, talking about the player’s childhood development of a creative short game, and the reason he recently turned to the Las Vegas-based instructor to help straighten out drives that tended slice under pressure. (Think the 2006 U.S. Open at Winged Foot.) Mickelson shows how Harmon quickly identified how he would slide his left knee backward during his takeaway, which was the basic start of a swing that ended up striking the ball with an open-faced club.  There’s a bit more involved, but from this one example, it’s clear why Harmon is a much sought-after teacher.

“Over the past 40+ years I have been blessed to work with some of the greatest players in the game: Phil, Ernie, Greg, Tiger, Seve, Freddie, and several up and coming players, such as Adam, Nick, and Dustin, who are destined to carve their names in the golf record books,” says Harmon.  “Obviously I am proud to have been associated with them and to have contributed in some small way to their success. But their accomplishments are only part of the overall picture of the scores of everyday players, from all walks of life who have left the practice tee after working with me, that feel that their game has been improved. For everyone that has worked with me there are thousands of golfers that I will never have a chance to try and help.”

With that in mind, he set out to create a filmed record of a lifetime of golf knowledge, covering fundamentals, specialty shots, club selection and even anger management, one lesson that Tiger Woods has clearly forgotten.  Butch Harmon on Golf is indeed the summation of that knowledge.  And the 68-year-old Harmon has in fact been in golf for his entire life. His father, Claude Harmon, a renowned club and teaching professional and 1948 Masters Champion, introduced him to the game.  His brothers are also well-respected instructors.  Butch played on the PGA Tour in the early 1970s.  Probably more pertinent to the DVDs is the fact that for the past dozen years, Harmon has been voted as the top instructor by his peers, in a poll conducted by Golf Digest.

Well, for some of us, instruction may actually work.

One Response to “About Golf: The Complete Butch Harmon”