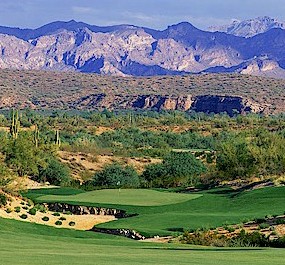 In the high Sonoran Desert, the vistas from both We Ko Pa courses are stark and beautiful.

Since the dawn of humanity and on every continent but Antarctica, bands of people have displaced others in quest of territory, food and security.  As much as any of such population, Native Americans did not fare well during the European migration into the New World.  Pushed into reservations in the United States, Indian tribes were typically left with land that Manifest Destiny-minded politicians felt had little value in resources, as a trade route or settlement potential.

In America, the rez usually sat the middle of nowhere.

That certainly described the Fort McDowell Yavapai Nation’s 40-square miles of rocky desert Arizona landscape in 1903, when it was created by executive order from Washington.  However, since December of 2001, one of the most sublime golf courses anyone could imagine now wanders through the reservation, a mystical pathway of green draped on 700 acres that include natural draws, century-old saguaros and enchanting rock outcroppings.  The Yavapai named it We-Ko-Pa, or Four Peaks Mountain, to honor the prominent feature in the 7000-foot-high range to the east, which includes Red Mountain and the Superstitions.  It was financed by the Ft. McDowell casino and designed by Architect Scott Miller of nearby Scottsdale.  Perhaps best of all, We-Ko-Pa’s remote serenity will never be broken by home-sites.

Selected by Sports Illustrated as one of the top ten new public golf courses right after it opened, We-Ko-Pa has since been ranked number 38 on Golf magazine’s “Top 100 You Can Play” list.  “This facility has been a great success, both financially and in the positive light it sheds on the Yavapai Nation,” explains We-Ko-Pa Director of Golf and General Manager Jeff Lessig.  “The tribe is very proud of their course.”

Indeed, now known as the Cholla Course, it was joined by another course built next to it called the Saguaro.  Designed by Bill Coore and Ben Crenshaw, this layout also routes through the desert landscape.  From many holes one can neither see nor hear a sign or sound of modern development, save for the omnipresent commercial airline controls over this part of Arizona.

Tribal pride in the construction of excellent golf courses on Indian reservations is a certified and growing trend.  According to the Golf Course Superintendents Association of America (GCSAA), there are roughly three-dozen Native American communities that own or operate more than 50 golf courses.

It is sweet irony that such lands could be transformed into gracious and prosperous places, in a manner analogous to clever Brother Coyote of Indian mythology, who in so many tales turned a dire situation into an advantage.  What’s more, well-crafted golf courses are in harmony with the transcendent reverence Native Americans have always shown their homelands.  Nearly all of the tribal courses follow the stringent Audubon International standards for environmental preservation and protection, which actually enhances wildlife habitat.   That concern, and a willingness to provide good architects with total support, is the formula for award-winning golf courses. 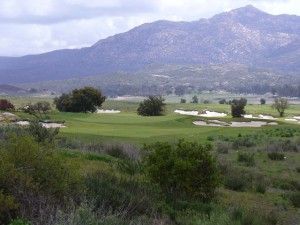 The third hole at Barona Creek.

Consider the Barona Band of Mission Indians and their new Barona Creek Golf Club, about a 30 minute drive from downtown San Diego.  Ranked as the one of the top public-access facilities in California, the course makes use of subtle undulations in terrain, prominent rock outcroppings and more than 170 mature oak trees that were transplanted from other regions of the reservation.  Explains Barona Band Chairman Clifford La Chappa: “Our vision was to convey to visitors the tribe’s tradition of living in harmony with nature and to provide golfers of all skill levels with a fun and challenging game.”

This is also true of the ancestral lands of the Mississippi Band of Choctaw Indians, which is home to the Dancing Rabbit Golf Club, with a pair of golf courses nestled among some 700 acres of ancient pines and hardwoods, gently rolling hills and two miles of spring-fed streams.  Designed by Tom Fazio and PGA Tour star Jerry Pate, Dancing Rabbit opened in the late 1990s and was also ranked as one of the top 100 public courses in the nation.

Last July, the Oneida Nation of New York state opened its third championship golf course, all of which are associated with the tribe’s Turning Stone Resort and Casino.  Designed by the renowned Tom Fazio, the Atunyote Golf Club joined the Kaluhyat Golf Club which opened the previous year, was designed by the estimable Robert Trent Jones Jr.  Turning Stone’s first course, Shenendoah Golf Club, was designed by pretty fair country architect name of Rick Smith, back in 2000.

That’s one tribe, one resort and three courses designed by a veritable Hall of Fame trio of architects.

In fact, there is a growing love affair between architects, operators and Native American tribes, who in turn have embraced – – and truly graced – – the game of golf.  “You often hear people say that there’s no good land left for golf courses, that MacKenzie, Ross and Tillinghast got all the best places back in the 1920s, ” says Todd Eckenrode of Irvine, Calif., who served as project architect on the Barona Creek.  “That might be true in urban areas or along coasts.  But a lot of Indian reservations are in remote areas, and on land that’s almost magical for golf.”

While reservations may be good for golf, there are tribal leaders who feel golf is good for the reservation in several dimensions.   “We are in a rural area of Eastern Oregon, which made it clear that if we were to grow, prosper and have stability, we should diversify into something more than an Indian casino,” explains Gary E. George, a Native American who is the Chief Operating Officer for the Wildhorse Resort,  Casino and golf course, near Pendleton.  Owned by the Confederated Tribes of the Umatilla Indian Reservation and opened in 1996, the Wildhorse course was one of the first built on reservation land.

“Gaming is proliferating right now,” adds George, “but at some time that trend will end.  The tribes that can offer more to tourists will have a better economy and better community, especially with something like golf.  The game is special and the discipline it enforces brings out the best in a person.  I see kids that I used to prosecute for delinquency when I was the tribal executive director, now as young adults who get up early to play golf, and who work hard so they can keep playing.  That’s a great social benefit.”

As an elder in the business of reservation golf, George led the first Tribal Forum, during a Golf Course Superintendents Association’s Education Conference in San Diego.  In his keynote address, George wanted to “debunk the myths” of doing business in Indian Country.  “There are people who think they can come into a reservation and there are no rules with which they have to comply,” says George.  “Well, there may be state laws that don’t apply, but many federal standards such as the Endangered Species Act and the National Environmental Policy Act will affect a project.  And then there are many tribal governments and laws that a developer must understand.”

While reservation courses do have some flexibility on regulations that apply to non-Indian tracks, most follow Audubon International standards and local environmental convention.  For example, water-conscious Arizona has for two decades restricted new courses to 90 acres of irrigated turf and another 20 for transition areas of rough and bunkers.  This makes for what are known as “target” courses, with golfers forced to navigate narrow fairways traced over snake-infested badlands.  We-Ko-Pa is a target course that doesn’t feel like one.  “Scott Miller stuck with the 90 acres of turf,” explains Lessig, “but because he had so much room, he could do a routing with clear site lines and landing zones that are wider and cleaner than at other desert courses.”

Architects now recognize that Indian tribes may be better clients that even Donald Trump.  “First off, if the courses are meant to enhance a resort, there’s not as much pressure to make a huge return on the investment on just the golf,” explains architect Eckenrode.  “What also led to the success of Barona is that we didn’t have to squeeze the fairways inside a residential development.  Without the restrictions of residential infrastructure, we had the freedom to follow the land.   And because the tribe already owns the land and it’s not a cost, more of the investment can be put into the layout. You just don’t have to cut corners.”

At some of the tribal courses, golfers don’t have to cut their own corners just to afford green fees.   Two years ago, the Upper Skagit Indian Tribe of western Washington State purchased two highly-rated but financially-troubled courses, and put marketing muscle into reviving the operations.  One of them is called Semiahmoo, a seaside facility about two hours north of Seattle.  It is considered the best public course in the state.  Peak-season green fees here are $69, with deep discounts in the winter.

Meanwhile, Sacramento-based architect Brad Bell couldn’t wait to get started on the Cache Creek Casino Resort course in northern California.  Owned and operated by the Rumsey Band of Wintun Indians, Cache Creek started out as a modest but popular bingo establishment.  “They now have a huge new casino and a high end hotel, but now need that final item, a golf course, to make it a destination,” says Bell, who designed what’s become the Yocha Dehe Golf CLub, named bty Golfweek as one the best resort courses for 2011.

Fifty miles from Sacramento and nearly 100 miles from San Francisco, Cache Creek is aggressively promoted, a necessity given its location in the sparsely populated Capay Valley.   A fine golf course just might end up as one of the resort’s strongest attractions.  “I’ve talked with my clients and capital just doesn’t seem to be a problem,” says the clearly enthusiastic Bell.  “We’ll go through a complete permitting process like any other course in the state, and follow all environmental laws to the letter.  But I had 175 acres to work with, on fallow farmland in a beautiful setting that’s on a road that used to be to nowhere.”

Ah yes, that’s where reservations were usually placed, on land no one else at the time really wanted.  And so it is fitting that Indian golf courses will never be lined with the condos and houses that blemish so many others.  And enchantingly right and proper in the way these courses so superbly frame, feature and enhance the natural landscape of the rez.