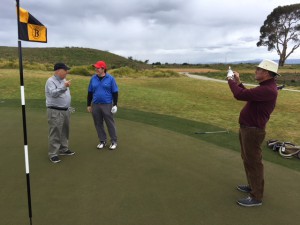 After nearly six years of starts, stops, delays and typical regulatory bureaucracy around environmentally sensitive land, the transformation of the old Palo Alto Municipal Golf Course into the Baylands Golf Links is nearly done.  And while the track won’t officially open until late April or early May, a preview with Golf Course Architect Forrest Richardson, who designed and managed the renovation, suggests golfers will find the updated venue well worth the wait.

With rolling fairways over ground that was once pedestrian flat, and large and wonderfully complex and contoured greens replacing plain-Jane putting surfaces, the new look calls to mind courses from the Scottish past.  But thanks to a modern infrastructure, it befits a 21st Century design that’s wedged between U.S. 101 and the San Francisco Bay, and flanked by the headquarters of Google and Facebook, in the veritable heart of Silicon Valley.

In early March I was invited by the affable and always entertaining Richardson to unofficially inaugurate Baylands, along with the Golf Channel’s Jason Deegan – – who frequently writes about course architecture  – – and the veteran locally-based Golf Course Architect Don Knott, who spent many years with Robert Trent Jones Jr. and has more than 80 worldwide designs to his credit.  We had the rare opportunity to launch shots from fairways without a single divot, and onto greens untouched by ball-marks.   Putts ran fast and true on the upgraded surfaces.

“The project actually started as work to make way for flood control,” says Richardson, explaining that the land here was historically an estuary of San Francisquito Creek, which often overflowed its banks and backed up into east Palo Alto. Engineering studies found that the best way to manage flow was to move the creek closer to the course, and greatly increase the height of the levee between the two.  In the process, more than 600 non-native trees were removed, while 40 of the 180-acre site’s 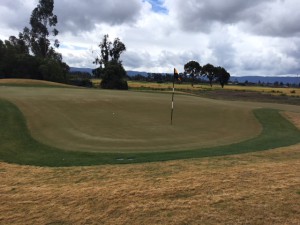 The steep contours of the seventh green could make it the most “controversial” on Baylands.

lowest areas were planted with native trees and grasses.

The most significant aspect of the $12 million project was the 500,000 cubic yards of soil trucked in from a construction site at Stanford University.  “Smart dirt,” notes Richardson, which raised the elevation of the course by five to seven feet.

In a long career as a golf course architect, William P. “Billy” Bell designed some 55 courses, including the Bel-Air Club, the Stanford Golf Club and Riviera, along with numerous other private and municipal facilities, including Palo Alto.  I don’t know what Palo Alto looked like when it opened in 1953, but when I played it in the mid-1970s, the Muni was more a routing than a design.  Unmemorable adjacent fairways fed into unmemorable greens.  The only lasting image of Palo Alto was of the runway of the nearby general aviation airport.

The Muni clearly suffered over the decades.  During the 1980s it began to subside and sink below sea level.  In the 1990s, many tons of sand were brought in to raise it a few feet, although soggy conditions frequently prevailed.  Parts of the course were taken out of play.  The popular restaurant next to the Pro Shop remains the epitome of 1970s design.

The most recent fixes to the course that sits at the edge of the 2,000-acre Baylands Nature Preserve of San Francisco Bay did not come swiftly.  Federal and state permits dealing with endangered and protected species took several years to acquire.  More than 35 public hearings were held.  Six environmental agencies eventually signed off in the Summer of 2016.  “Our team was exceptional at sticking with it,” explains Richardson.  “In the end we demonstrated how a golf course can amount to a win-win for everybody.  We not only solved flood control, but also created new habitat, more wetlands and a landscape that is now intergrated with San Francisco 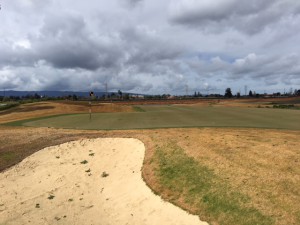 The third and 15th holes share this very large green.

Bay,” instead of what was an artificial tree-covered parkland.

The 18-hole, par 72 Baylands will play from 4,200 yards to 6,800 at the tips.  The routing includes five par 3’s and five par 5’s.  As one often finds at Richardson designs, the greens are challenging, interesting and downright fun, if not at times different from anything you’ve seen elsewhere.  For example, the par five third hole shares a huge, 20,000 square foot putting surface with the par three 15th.  (See photo at right.)  Number 14 has two separate greens.  “The one on the left sticks out into a wetlands area, is small and not very receptive to poor approach shots,” explains Richardson.  “The one on the right is a punch bowl, feeding most everything right onto the green.”

The seventh hole features what Richardson feels is his most “controversial” green.  “We’ll have to wait and see what kind of comments we get from average players,” he explains.  “I may have gone too far here,” he concedes, pointing to its most severe slope.  On number nine, however, the green is largely flat.  “My shaper kept asking, probably four or five times, if I was sure about nine,” says the architect.  ” Are you sure you’re done?  Certain?” 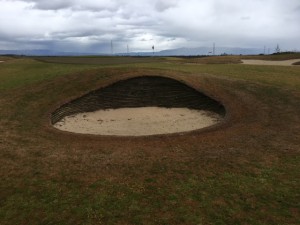 One of the two revetted Durabunkers on Baylands.

While the base beneath most of the bunkers features the Better Billy Bunker system, two are made with the Durabunker system, recycled materials stacked like the revetted sod pot bunkers of Scotland.  Also different are the 80 acres of fairway and rough  planted in Platinum TE Paspalum, a grass that goes dormant and turns brown in winter, the first use of its kind in Northern California.

When Baylands opens in the Spring, OB Sports will managed the course and pro shop. It will also be hiring at least one geese-chasing dog, as most fairways are today covered by an astonishing load of bird poop.  Says Richardson, scuffing the poo off the bottom of his shoes: “I wish he or she were already on duty.”