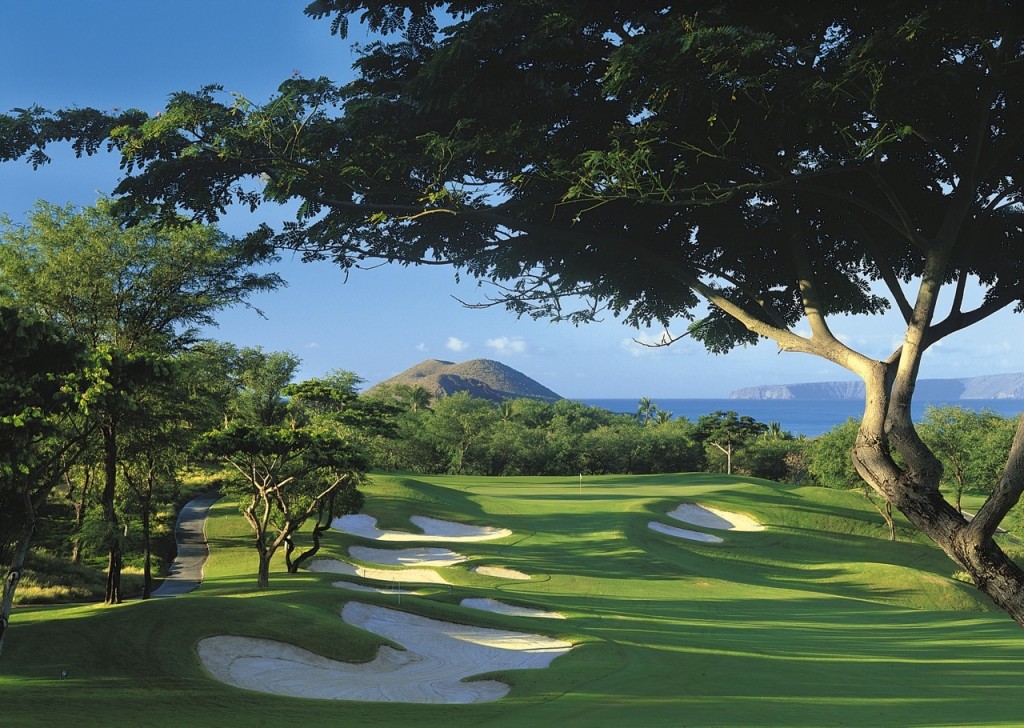 It’s unlikely that the Golf Road Warriors will be here in Maui long enough for me, at least, to figure out the island’s geography. I suggest you call up a map of “The Valley Isle” on the internet and see if I’m at all correct in describing it as sort of a figure-eight tilted about 45 degrees left—so it points to the northwest—with the top circle of the eight smaller than the bottom circle. That about right?

If not, it doesn’t really matter. In fact, very little matters here in paradise. Annoyances roll off the back, and even my balky golf game isn’t worth worrying much about. For today, I get to blame it on jet lag; if things continue the same way tomorrow I’ll find another excuse, most likely the too many tropical drinks I plan to have later this evening. I think I’ve earned them.

The Warriors played the Gold Course at Wailea today, which may have been a bit tougher a test than necessary for guys who aren’t sure how many time zones we crossed and got less sleep than the parents of a newborn. The Gold has a proud pedigree, having hosted the Senior Skins Game and other pro events, and earning accolades from every golf magazine for its combination of beauty and brawn. Designed by Robert Trent Jones Jr. back in 1994, it is the archetype of Hawaiian resort golf with broad views of the Pacific, lush turf, volcanic remains, and much more subtlety—particularly on the greens—than is immediately obvious.

It also has great weather. On one of the tourist maps I picked up at the airport (there are racks of them on every island, filled with coupons for free t-shirts and lists of fishing guides, etc.), was a note that said the Wailea coast is one of the driest and sunniest parts of the island. (Back to that sideways figure-8: Wailea is on the lower circle at around 9 o’clock, the Pacific to its west.) If you watched the PGA event up the coast at Kapalua back in January, you may remember some windy, rainy days that disrupted play. According to the Gold Course’s head pro, Rusty Hathaway, who showed us around his 18-hole playground, on those same nasty days in north Maui (Kapalua is on the upper circle at around 11 o’clock), the weather in Wailea was perfect.

As it was today. With the Pacific to the west and the foothills of the volcano Mount Haleakala to the east, Wailea is blessed with meteorological magic. For our entire round, the hills to the east were shrouded in dark clouds and it was obviously pouring not too far away. But the long bank of despair never moved closer to us, perhaps held at bay by the gentle breezes off the water. Our clouds were big and white, and gave some welcome relief from the brilliant sun. (Speaking of Haleakala, when I was last on Maui 20 or so years ago, the family took an incredible bike ride down from the crater. I remember waking up ridiculously early to be driven up to the top before sunrise, then once day began, mounting up, zipping down, and stopping every few minutes to remove another layer of clothing as the air got hotter and we got closer to sea level. It was obviously a great activity if I still remember it fondly two decades later.)

Sitting that close to the foothills, you shouldn’t be surprised to learn that the Gold Course features a lot of elevation change. But that’s true of many of Hawaii’s courses, which although close to the sea are built on old lava beds that have been made arable and playable through man’s hard work. The resulting fairways dip and rise, presenting some funky angled lies and often leading to tilted and twisted greens. It took great effort to turn the brown jagged lava rocks, which are visible all over the course, into a thick, lush greensward, a thought that may offer a little solace should one of your shots rattle around a lava field like a pachinko ball.

The Gold was a charming and challenging introduction to the next few days of Maui golf. When you come to Wailea, leave a few minutes to browse in the large and well-stocked pro shop (regularly voted not only one of the best in Hawaii but in the country), and finish off the round with a drink and maybe a meal in Gannon’s restaurant, which looks toward the ocean. Like the course out its back door, the restaurant—and especially its outdoor dining/drinking area—is the quintessential tropical experience.