The Golf Road Warriors launched our Palm Springs campaign with a round at the Classic Club, an Arnold Palmer-designed course that opened in 2005 and was a co-host of the Bob Hope Chrysler Classic from 2006-2008.  Why its lush fairways are no longer stalked by the big boys from the PGA Tour, despite the course having been created specifically for the purpose of hosting the Hope, is a cautionary tale about who wields real power in the golf business these days, especially on Tour. 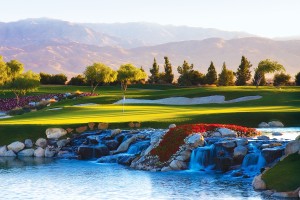 How to Spend Millions Building a Golf Course

Four guests joined the Warriors, which allowed us to test the new “Live Event Leaderboard” scoring technology developed by Grow the Game Golf.  GTGG’s website describes it as “the world’s first cross-platform web and smartphone golf app to put up-to-the-second scoring, a live-event leaderboard and effortless event-management tools all in one place.”   I am sure there are people who know what that means.

Warriors Jeff Wallach and Jay Stuller were in the first group, joined by veteran Desert Sun golf writer Larry Bohannan and a GTGG partner.   Jeff kept that foursome’s score with the GTGG’s app on his I-phone.   I was in the second group with Warrior Peter Kessler, who was riding with Classic Club Director of Golf Brady Wilson.  I was assigned to enter our scores on the GTGG app.

I rode shotgun with Dr. Barry Lotz, a Coachella valley real estate salesman, author, and sports coach who describes himself as “a vertically integrated conglomerate in a very small space.”   Born in South Africa but a US resident for many years, Lotz is the director of the Professional Golf Teaching Association of America, and a “coach,” in his words, “to many touring pros.”

Wallach modestly entered his name on the GTGG scorecard as “El Jefe,” suggesting that he might be expecting tribute.  In my case, alas, he was correct, as he would be for the entire week.  Kessler kept asking me how Wallach was doing, although he never actually called him “Wallach.” Kessler possesses an impressively wide and creative range of pejoratives.

Peter hit the ball well on every hole but putted so poorly on the front nine that we started calling the score for a hole played with a green hit in regulation followed by a three putt a “Kessler.”   You can also use it as a verb.  “Man, you really Kesslered that hole!”  Or, “you need to get off the Kessler train.”   Peter had seven three putts on the front before a brilliant lag on the 9th from above the hole finally yielded a tap-in par.  Kessler hit the ball like Mo Norman but putted like Don Knotts.

Brady Wilson said that he doesn’t get to play much, but confessed to spending a fair amount of time on the putting green.   He was using a Scotty Cameron putter custom-fitted by the master himself for Brady’s stroke.  Every putt tracked on line with flawless pace.  Brady was also the perfect guide for a first encounter with the Classic.  He’d show us how to play the hole by hitting his drive in exactly the right place.  Brady also pointed out where the touring pros found trouble during the Hope, although I was perfectly capable of discovering where you should not hit it without any professional assistance.   My new Callaway RAZR Fit driver continued to provide the best service of any driver I have ever swung, and any successfully played holes on my card were attributable to good drives.   Never loved a club so much.

We played the Classic on a windless, warm day, but when the PGA Tour played the course the wind typically blew pretty hard, creating a condition the pros don’t like: firm fairways combined with tricky winds which made it tough to control trajectory.   At a tournament like the Hope, with its history of very low scores, when players suddenly started posting high numbers it was a shock.   The Classic was the kind of test they were using to facing later in the season, on courses whose reputations as championship venues made them immune from criticism.  Oakmont kills everybody, but no one would have the nerve to complain about it.  That’s what courses like Pete Dye’s TPC at Sawgrass or the Stadium Course at PGA West were for: places the pros felt free to complain about all they wanted because the weight of history and tradition didn’t seal their lips.   There was no reverence or respect to counterbalance their grousing at the Classic, so they indulged in uninhibited whining.   The Classic Club’s reputation fell victim to this dilemma.

The Classic Club was a fair test for the Road Warriors, although we played at just over 6,700 yards as opposed to the 7,500 the pros confronted.   The setting was spectacular: panoramic views of the mountains from most tees, unobstructed by buildings, the near horizon backlit by clear skies as temperatures bumped up into the 80s—a perfect day for winter golf in the desert.   Brady shared some background on the course, which was built by Landscapes Unlimited, the premier course builder in the US, with an essentially unlimited budget.   There are reports that the course alone cost around fifty million dollars, and that was before the clubhouse was built.  No stand-alone course costing that much could possible operate profitably.

The basic cost to build a golf course doesn’t vary much, because you need 18 holes with greens and tees and hazards, with an irrigation system to keep 70 acres or so green, no matter what.   The two big variables affecting cost are how much earth you move and how fancy you get with landscaping and other amenities.   At the Classic Club, according to architect Vicki Martz from Palmer Design, they moved three million cubic yards, which is a big number, and then constructed some elaborate water features before planting thousands of trees, in keeping with the trend started by Steve Wynn with Shadow Creek in Las Vegas to make desert courses look and feel as if they were imported wholesale from North Carolina.   In addition to its elaborate landscaping, the course was fitted with underground cables and other high-tech communications gear to make televising the event easier.   This infrastructure investment is now in every sense of the word a sunken cost that cannot be recovered.

The design also provided plenty of room for galleries to circulate, which is part of why the Classic has such an open, accommodating feel.  The huge clubhouse, too, was built to accommodate the tournament, so it’s much larger than a daily fee course built as a would ever need or could justify. 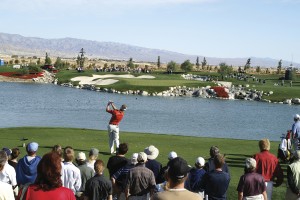 When Hope Was Alive at the Classic Club

The funds to build the Classic Club were provided by the H.N. & Frances C. Berger Foundation.   The completed course was formally gifted to the Bob Hope Chrysler Classic in January 2005.   Since the Hope, too, was dedicated to charity work in the Coachella Valley, providing it with a world-class venue seemed a good fit for the Berger Foundation.   Then the wind kicked up, desiccating the players’ egos, and the course lost its luster.  Golf.com referred to the course as “the hated, ultra-windy Classic Club,” and noted that after Phil Mickelson shot “a wind-blown final-round 78 there in 2007,” he stopped coming.  The final round scoring average of 74.763 in 2007 was the highest in tournament history.  Not one player had a bogey-free round.

When Mickelson stopped playing the Hope, the Hope—now called the Humana, and hosted by President Bill Clinton—stopped playing at the Classic Club.  In 2008, the tournament re-gifted the Classic Club back to the Berger Foundation, so the players could resume their painless, low-scoring annual paid holiday in the desert.

The Classic Club still honors its charitable purposes, with 7,000 of the annual 37,000 rounds played there contributed to local non-profits for fundraising events.  The course was in wonderful condition, the staff was welcoming, and the lakes yielded seven ProV1s, earning my coveted BallHawker Five Star rating.   I thought the course, the setting, the ambience and the conditioning were all first rate, and recommend the Classic Club as an exceptional daily fee experience.