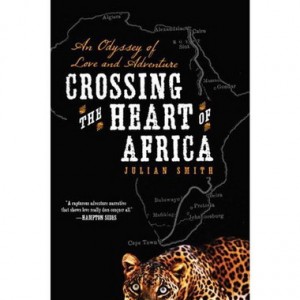 Travel writing flows in two broad streams, each descending from the headwaters of the Victorian imagination. Nineteenth-century Baedeker-style guides encouraged tourists to venture abroad, taking advantage of the relatively inexpensive travel provided by steamships and railroads. The Lonely Planet series, Rick Steves’ guides and the Rough Guides echo the method of these Victorian antecedents.

Adventurer-authors filled the second stream of travel writing, with their exhilarating narratives of life-and-death encounters with fierce beasts and ferocious people, especially in Africa. Henry Stanley, Mary Kingsley and Richard Burton  were among the celebrated explorers whose accounts thrilled Victorian readers, creating an enduring image of the “dark continent.”

Smith’s approach to Grogan’s epic journey mixes elements from the two main modes of travel writing. Smith, as an accomplished author of travel guides, knows how to negotiate unfamiliar terrain with limited resources and no common language. But he’s also roughing it at times, echoing Grogan’s travails. But what Grogan spent two years doing, Smith hopes to finish in two months.

Grogan undertook his adventure to impress a woman, or at least her skeptical stepfather. He was 25 and a veteran of the British army’s colonial wars in southern Africa, but he’d been kicked out of Cambridge and didn’t have a job. Grogan’s beloved, Gertrude Watt, was a descendent of James Watt, whose steam engine powered the industrial age. Gertrude’s aunt agreed to subsidize Grogan’s journey, Smith writes, suggesting that the family was not entirely hostile to Grogan’s campaign to win Gertrude’s hand. An uncle accompanied him for much of the journey.

Smith heads north from Beira along Grogan’s path, following the rivers and lakes of the Great Rift Valley, from Lake Nyasa (or Lake Malawi) in the south through Lake Tanganyika to Lake Albert in the north and then over the Mountains of the Moon to the White Nile and the dangerous waters of the Sudd. Smith crosses land mostly as a passenger on bikes, or on buses and the occasional taxi. He avoids the eastern Congo, one of the world’s most dangerous places.

His travels through Rwanda and his reflections on the genocide there echo Grogan’s chilling encounter with cannibals, an episode whose accuracy historians have called into doubt. The dangerous men Smith may encounter — veterans of the Rwandan genocide or followers of the insane prophet of northern Uganda with his Lord’s Resistance Army — have AK-47s. Grogan’s antagonists mostly threatened him with spears or shouts, while Grogan had powerful guns himself, which he used to dispatch the occasional elephant or hippo in the characteristically casual approach to slaughter of the gentleman hunter.

But while Grogan survived a series of life-threatening encounters, according to Smith, the modern traveler faces instead a string of inconveniences. The parallels between Smith’s journey and Grogan’s are broadly drawn, but in the end it’s Grogan’s tale that carries the day.

Smith’s narrative of Grogan’s journey is based on Grogan’s book, “From the Cape to Cairo: The First Traverse of Africa From South to North,” published in 1902 with an introduction by none other than Cecil Rhodes. (Interested readers can download it for free from Google books, and the facsimile includes Grogan’s photos and drawings, some of which Smith includes in “Crossing the Heart of Africa.”)

The eastern half of Africa, from the Indian Ocean to the Mediterranean, is a region still fraught with danger and disarray, from the genocidal wars of Sudan to the forays of Somali pirates to the rebellions of the eastern Congo. Smith’s book raises anew the question of what role the adventurist colonials of the Victorian age contributed to Africa’s ceaseless sorrows.