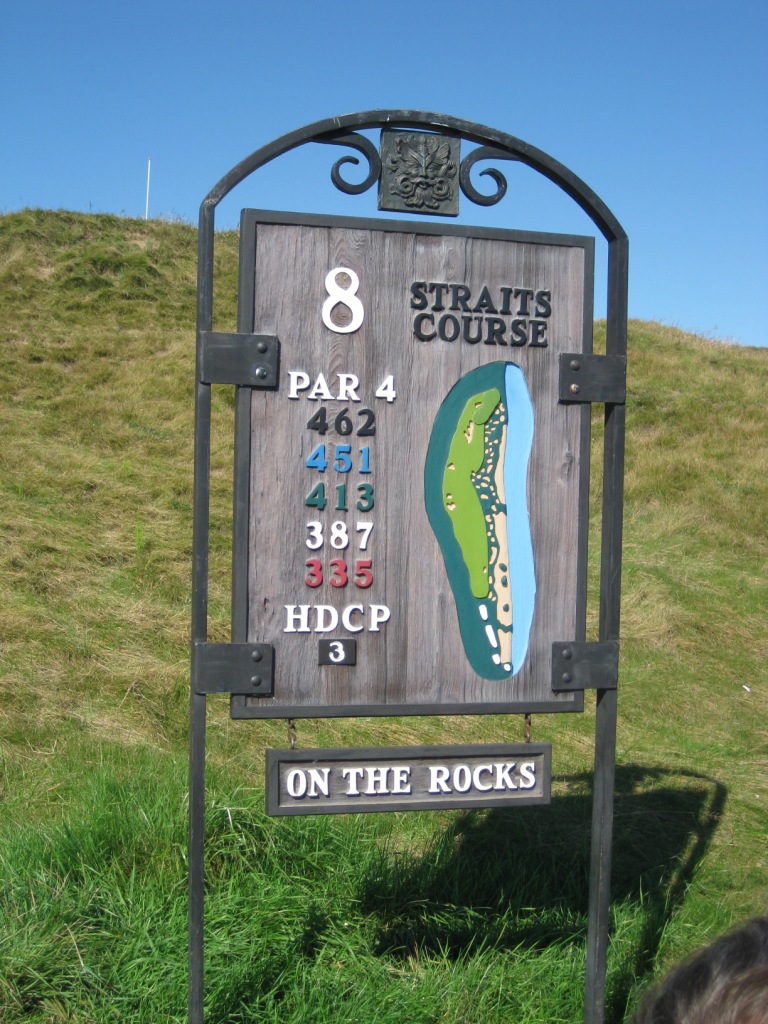 The sign pretty much says it all: bunkers, water, and lots more bunkers.

This is the final installment about Destination Kohler, one of the world’s greatest golf resorts. I’ve covered the food, activities and lodging that make it unique, but saved the best for last: it’s time to talk golf.

I’ll start with the obvious, The Straits Course, home to this year’s PGA Championship, won by Martin Kaymer, its second and thus the second Major held on the Pete Dye design. I say obvious because it is the one golf fans know and associate with the word Kohler, the ones they saw on TV with its tremendous lakefront setting on Lake Michigan and 1100 bunkers, or about a thousand more than the average course. The Straits is the highest ranked course Pete Dye ever designed, and considering he has more Top 50 courses than any designer, living or dead, American or foreign, that is really saying something. Here he took a former dead flat Air Force base and turned the topography into something very reminiscent of an authentic Irish or Scottish links course, and if I had to choose, I would most directly compare it to the Cashen course at Ballybunion.

I say topography because it is the dunes and ragged bunkers that give it a links feel, but let’s be clear: it may be retro, it may be a return to golf’s roots, it may even be a nouveau links, but it is not a links course, and not because of the technicality that it is not on the ocean (it might as well be). The “problem” is that it has modern fairways and modern greens and American grasses and thus does not run and play like a links course, which would lend itself to low shots and running approaches. In this regards, I think the courses at Bandon Dunes in Oregon are the only publics in the States that truly capture that side of links golf. Most golfers won’t care however, because the Straits is so beautiful and so memorable and after all this is America, and it compares favorably with other American top ten publics like Pebble Beach Golf Links, Shadow Creek and Pinehurst Number Two, none of which are links courses either. In short, it is a true “must play.” 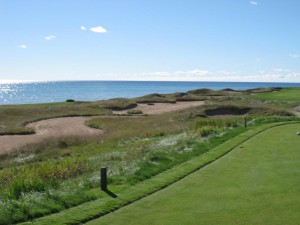 The setting of the Straits course along Lake Michigan is awesome.

It is also not nearly as scary as it looked on television, For one thing, it plays a lot shorter to mere mortals. Also, Pete Dye is the master of tee separation, the one designer who makes it a point to provide angles, carries and width for all ability players, and if you play the right tees you’ll be fine, even as pros struggle form the tips, just like at his nefarious Ocean Course on Kiawah Island. Also, all those fearsome bunkers built into the sides of the dunes lining the fairway actually help more than hurt: if you are going to hit an errant shot onto the hillside on courses like this, you would much rather be in the sand where you can find and play your ball than in the thick rough which often means a lost or unplayable ball.

To recap, Destination Kohler has two golf clubs, Whistling Straits and Blackwolf Run, each with two courses. Beside the Straits, Whistling Straits is home to the Irish, which is the only one of the four I am less than impressed with. Maybe if the Irish had a different name it would be fine, but even more so than Straits, it is a links pretender, and it comes much less close to the ideal. On one hole my playing partner wisely noted that “this looks like an Irish course from Las Vegas.” Indeed what it looks like is an amalgam of other Pete Dye courses, right down to the prerequisite bulkheaded par three over water and numerous interior manmade lakes with close cuts fairways sloping down to them, something you would be hard pressed to find on any Irish course not designed by an American. Straits is by far the best of the two courses here. Straits is walking only with caddies required, and while offered, the Irish also lets you use carts.

Blackwolf Run was originally one course, which hosted the Women’s US Open, and was later split with nine holes each going to what is now the River Course and Meadows Valley. These are much more typical parkland designs, about ten miles inland from lake Michigan and from Whistling Straits, right across the street from the hotels and shops of downtown Kohler, and both courses are very, very good. In fact, they are underrated, under appreciated and often overlooked because of the visual majesty and frequent TV appearances of the Straits. So not skip them. I think River is slightly better, a true must play and another Top 20 Dye design. By the way, Destination Kohler is the only place on earth with four public Pete Dye courses. 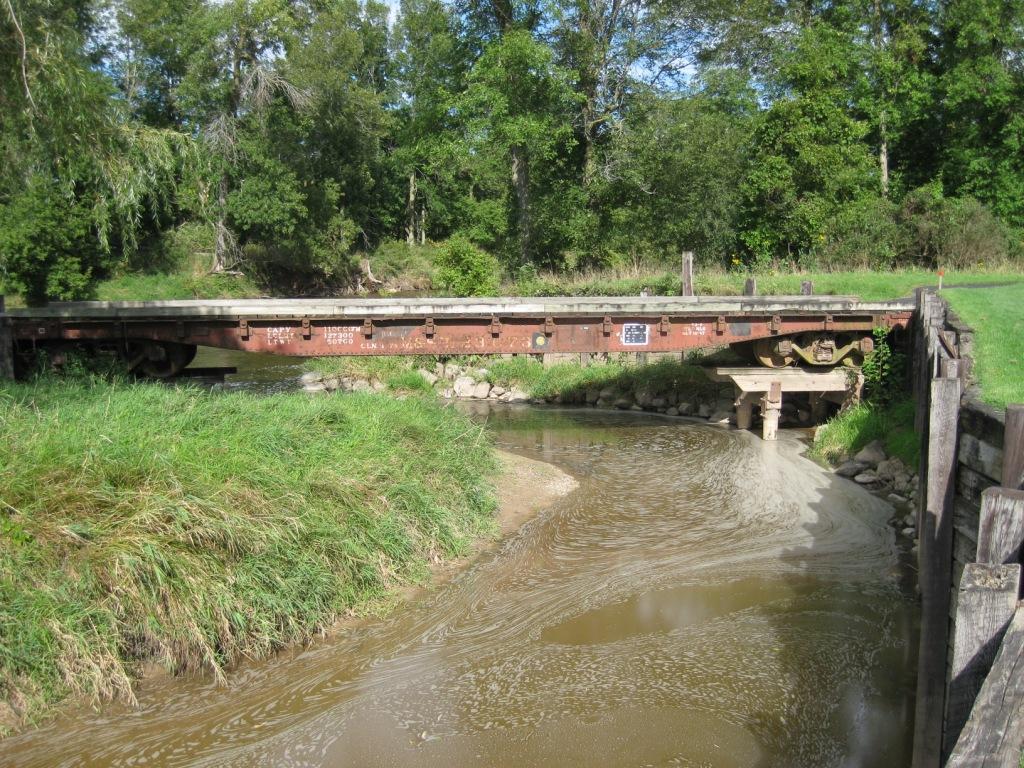 The clever use of old railroad cars as bridges on the River Course is a nice touch in a factory town like Kohler.

The River Course is the most strategic of the four layouts, with a lot of thought and options, and its best holes are those along the namesake river, which Dye used to create forced carries on several approaches. It is very reminiscent of another PGA Championship venue he designed, his beloved Crooked Stick, a  private course in Indianapolis where Dye actually lives, and both feature his trademark use of old railroad cars to make bridges. Trees, sometimes overlooked as an architectural element, are important to both courses here, and you will occasionally have to decide whether to go around or over them. Interestingly the River is both harder to score on than and more forgiving than the tighter Meadows Valley, with wide fairways and little rough. Lacking the river, Meadows Valley uses penal rough to create a much different look in a nearly identical setting, and it is hard to recover form errant shots.