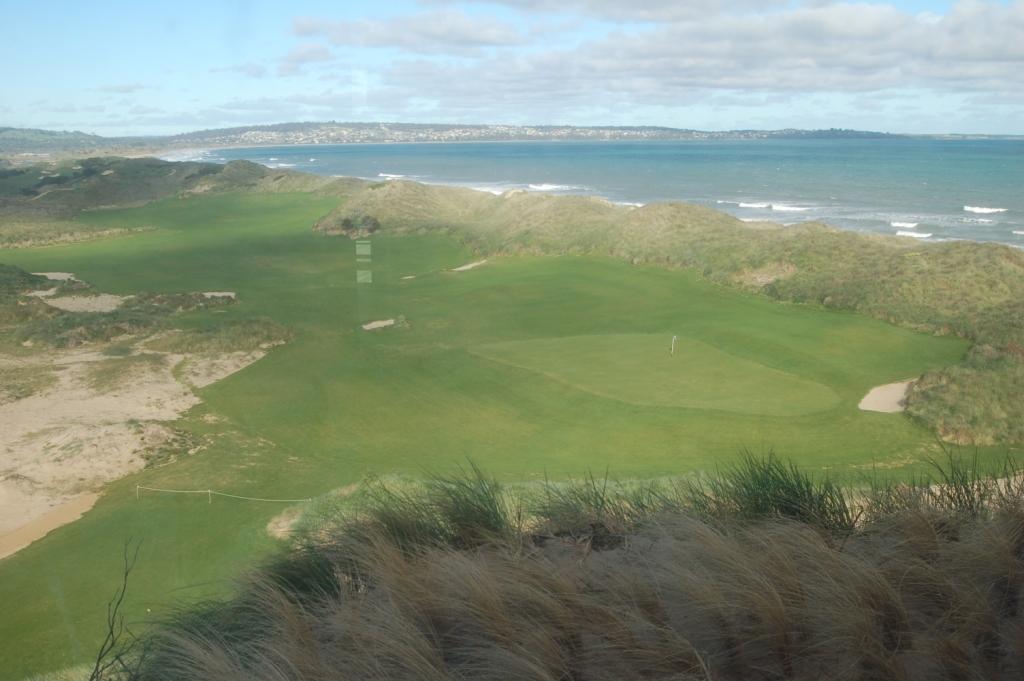 Australia's eagerly awaited Barnbougle Lost Farm, by Coore & Crenshaw, did not make Golf Digest's 2010 "Best New" list though plenty of lesser courses did. Why? Beats me. Is it really open? Yep, played it last week.

Got a press release announcing Golf Digest magazine’s list of Best New Courses 2010 issue. As usual, it did not disappoint – from a controversy perspective.

I was immediately suspect, considering that anyone who follows golf knows that these days there are almost no new courses, and the few notable ones are overseas. So I was pleasantly surprised to see that author Ron Whitten, sometimes an architect and sometimes a critic of other architects, began the story by noting the dismal industry conditions and asserting that they would skip this year.

Rather than speak for him, I’ll put it in his own words:

“Golf Digest’s annual survey of America’s Best New Courses is in abeyance. No point in producing top-10 lists like Best New Public and Best New Private when only 24 new courses opened in the last half of 2009, and just 18 more opened in 2010, plus a smattering of international nominees.”

Okay, so the format is changed, but the title of the article is still “2010 Best New Courses,” which he then goes on to cover (let’s just forget for a second that, unlike the Oscars, winners for 2010 did not actually have to open in 2010). It took awhile to figure out how this put the list in “abeyance” but I finally got it – because of the lack of courses, the “survey” part is being skipped, but not the “best” part or the “list” part, they just left those up to Ron. I guess the list had to be produced anyway, because that is what golf magazines thrive on, so their perspective is ‘reality be damned, here is a list of 2010 best new courses anyway.’

So I went through the story and added up the courses covered – not counting renovations – and there were 25. Based on Whitten’s assertion about the number of new courses, which I haven’t tracked so precisely, about half of the 52 courses that opened in the past 18 months made the “best new” list. Talk about critical standards. As with so many of the ratings in America, “best” now means upper 50th percentile.

I don’t want to sound overly picky about this (stupid) list, but one other thing caught my eye, especially since I received the release (not directly from Golf Digest to their credit) about this story on Veteran’s Day. As someone whose late father served in the Pacific Theater in WWII,  I find Whitten’s description of a hole (in Illinois) as “the Iwo Jima of golf,” somewhat disquieting. I hope thousands of volunteers didn’t die trying to make par there.

Anyway, I won’t get into a course by course look – too many of the courses included are ones that would never be covered if more had opened. They are “best” by virtue of simply having hung out a shingle. I will leave it you, dear reader, to check out the weird story and figure it out for yourself. Instead, I will leave you with one of the most incomprehensible statements ever written, one that I think speaks volumes to the “rankings” golf and travel magazines produce (for more on this subject see my rants about the Conde Nast Traveler faux ratings):

“Unshackled from the obligations of objectivity, I really got to be a critic for a change…”

Hello? If a critic wasn’t objective he wouldn’t be a critic, he’d be a booster. Wait. Yeah.