There is hardly a golfer alive who has not heard of the Old Course at St. Andrews, the birthplace of the game. 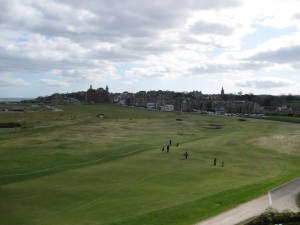 Looking back towards the first tee and 18th green of the famous Old Course, with the charming town of St. Andrews behind it.

But outside of St. Andrews, there is hardly a golfer alive who has heard about the Old Course in Reverse, the most fun you can have in Scotland without getting arrested.

To explain, let me briefly take you back to the end of the last millennium, when the 20th century’s final Open Championship, aka British Open, was played on these hallowed links in 2000. Tiger Woods of course won, and in record fashion, but one of the more memorable things about his landslide victory was the endless commentary about how in four days he did not hit a single one of the many, many bunkers on the Old Course.

Tiger is good, but not that good. The reason he missed all the bunkers is the same reason any very long hitter can do it: on the Old, they are in the wrong places. 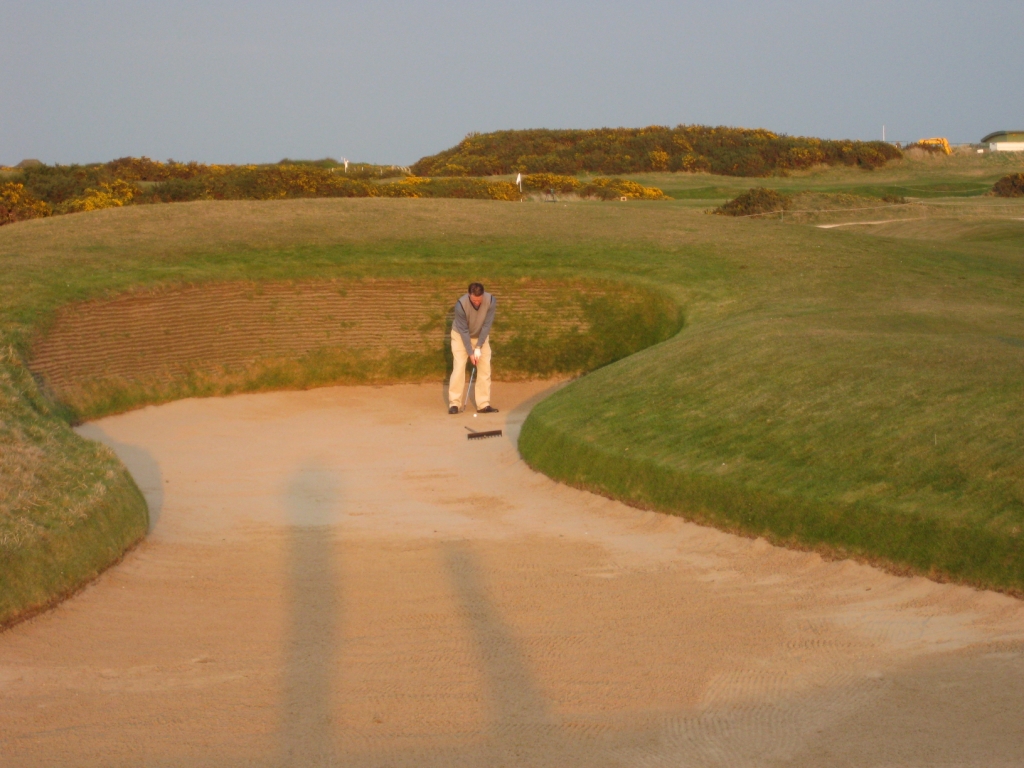 The current "forward" set up of the Old Course makes it harder to get into bunkers, but my friend Pat kept doing it anyway, and these bunkers are deep!

On most golf holes, the fairways bunkers are more than halfway down the hole, in order to protect the landing area. Take a 400-yard par 4. Architects know most players hit drives between 230-280, so the bunkers are likely to lie about two thirds of the way down the hole. If you switched the tee and green but kept everything else the same, the bunkers would now be just a third of the way down the fairway, much closer  to the tee, and long hitters would consistently fly them.

That is exactly what they did at the Old Course. Only they did it 113 years ago. Way before Tiger.

Golf was not always an 18-hole affair, and in fact, as recently as 1764 the Old had 22 holes, 11 out and 11 back, but a few were too short and ended up getting combined, so they ended up with 18. When other places decided to build golf courses, most patterned themselves on the Old, and thus today we have 18.

But the 18 created in 1764 are not quite the same as today. The course, famous for its large, shared, double greens, used to have such a green for holes one and seventeen. If you can picture the renowned first at St. Andrews, today you hit straight, with the beach made famous in the movie Chariots of Fire to your right. Back then you took aim at the Swilcan Bridge, the most famous feature of seventeen, and played out to the left. You then continued down the left hand side of the course, alongside what is now the Old Course Hotel and played the loop in a clockwise direction. 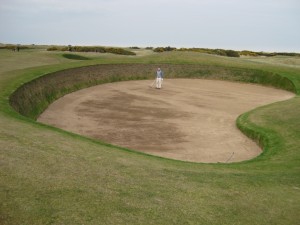 Here's Pat again in the huge Shell Bunker- which he managed to hit in both directions on two different holes.

In 1896, Old Tom Morris, St. Andrews’ most revered golfing son, had enough of that nonsense, and built a new separate green for the opener, the one we have today. This encouraged the course to be played in reverse, in what the Scots charmingly call the anti-clockwise direction. That meant, as Tiger Woods discovered, that the course’s 112 bunkers were suddenly set up more favorably, because they are meant to be hazards when played from the opposite direction. For many years they had it both ways, playing the “new” configuration counterclockwise and the original clockwise on alternating weeks. Then they did it just in December. As the course’s popularity grew this all became too cumbersome and now they do it exactly three times a year, right at the opening of the spring season in March.

To confuse you further, the original reverse routing is now normal, so The Old Course in Reverse is actually the Old Course Forward, at least in Old Tom’s Day. Today’s routing is the one with the bunkers in all the wrong places, but no one who plays the course ever minds, and few avoid them like Tiger did. In fact, the most memorable shots on the Old are usually failed escape attempts from the nefarious and deep bunkers, many big enough to have actual names.

To further confuse you, the course never actually closes for the season, even though they have an opening day. That is because in winter, to protect the turf, which will not grow back in cold weather, the Old Course does something very unusual, which they call “playing off the mats.” At the first tee every player is handed a square of artificial turf that they lug around with them. Except on tees and greens and rough, anytime you are going to strike the ball you lift it up and place it on this square of portable practice range and hit the shot off of it. The opening season is when they go back to playing off the grass.

Just to clarify, when you play the Old Course in Reverse, you do not simply play the holes in backwards order, like 18, 17, 16 and so on, which is what a lot of people think. You play from the first tee to the 17th green, using the 18th fairway along the way. Then you play from the 18th tee to the 16th green, playing down 17. And so on. It is crazy.

I did the Old Course in Reverse this year (2008) and it was awesome. Despite the fact that they do it every year, and have actual yardage books for it (the Scots have a different word for everything, so it is Strokesaver) and scorecards, they make no sense and even the caddies are badly confused. The result is a lot of blind shots, vague yardage guesses, and people hitting into one another – head on. I have never played a more dangerous round of golf in my life, heard “fore!’ yelled more, or had such a good time, My friend and I brought a bottle of whisky along for the walk, which helps (no puny fifths in Scotland, they sell it by the full liter). 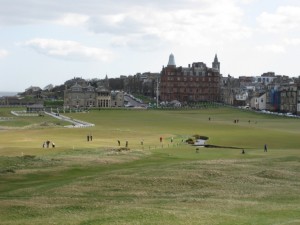 Playing the Old Course in Reverse is one of golf's most interesting and historic experiences.

Every year, they sell an Old Course in Reverse package that consists of one round “forward,” or the current modern routing, and one round in Reverse, plus a third round on one of the other Links Trust courses, the Eden, New or Jubilee (New is considered the best but all are great). They do this by setting the course up in reverse on the second and third and sixth days of the new seasons. The best package are the first or last, when you play it first forward, then in reverse. Due to demand some people, those on the middle package, have to play it in reverse first on day three, then forward on day four. Then it is forward the rest of the year.

Besides the novelty and history of the Old Course in Reverse package, there are three other good reasons to book it. First, it is actually easier to reserve than a normal tee time just forward. It is booked the same way, on the opening day of reservation season (they have a lot of rules in St. Andrews) which is always the first Wednesday of September. But since it has a different reservation application, and very few foreigners know about it, you have a better chance. It is also a relative bargain, much cheaper than booking two normal Old Course rounds and a third on another layout. It is also a slow time in St. Andrews, and rooms are cheaper as well. The weather tends to be good, at least good enough where you have just as much chance of getting lucky as in July or August. For all these reasons, the Old Course in Reverse package is a must for any passionate golfer, at least once, though I would like to do it again.

One more thing: even though you missed the reservation date for 2010, you did not miss the package. When they say every year, they don’t really mean it. For some reason no one in St. Andrews can explain, they decided to skip the whole thing for 2010, so start looking for the Old Course in Reverse, vintage 2011, in early September 2010. I told you it was confusing.