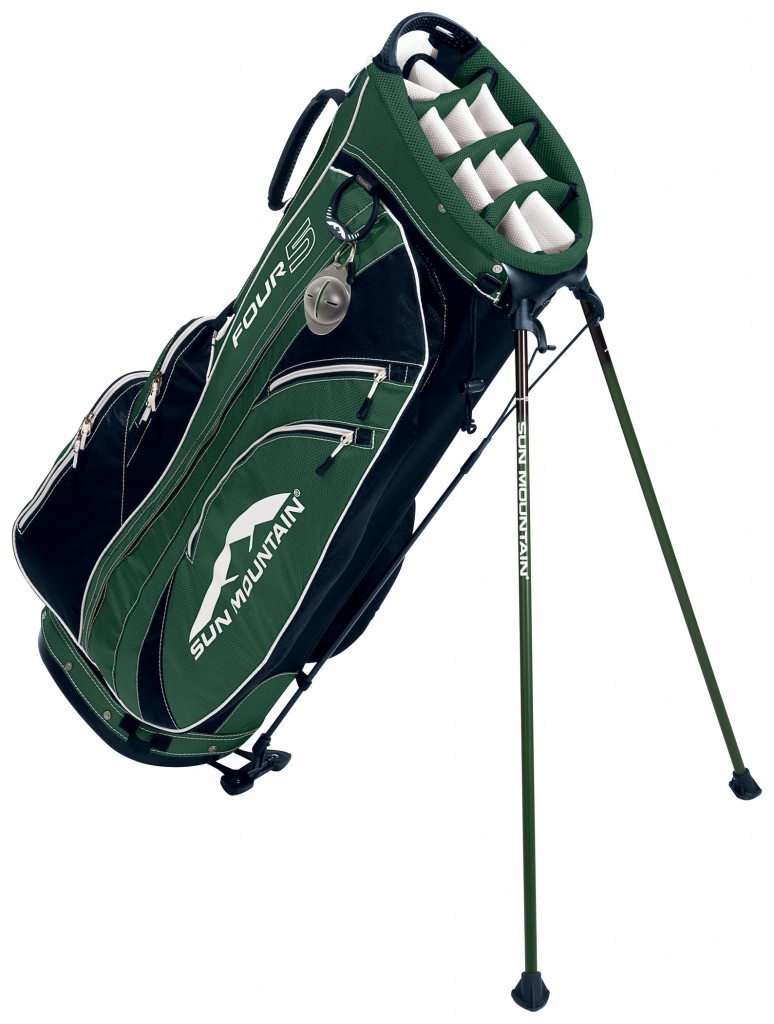 This is the carry bag I used until recently, Sun Mountain's fully-divided Four 5. Note the sleeves for each club.

Golf magazines love to do these stories called “What’s in the bag?” where they look at the clubs a tour pro plays in excruciating details, as if replicating those irons and shafts will save your game. It won’t but you’d probably still be better off copying a tour pro’s gear than my own, unless you too want to struggle to break 90.

Where I know my equipment is on the travel front. After all, I play more different courses every year than anyone on Tour, and way more courses than a top player like Tiger Woods, and I don’t have my own jet or handlers to lug the stuff. I carry my own bags, to my car, on the shuttle bus, to the airport, into my hotel room, and whenever possible, on the course.

So in the course of my career as a travel and golf writer, I’ve tried lot of things and come up with some personal favorites for the traveling golfer, which might be especially relevant cold weather approaching and longer distance golf escapes on the horizon.

Carry Bag: I love Sun Mountain. There I’ve said it. I’m not paid to say it, like the guys on Tour and their equipment. It’s just hat over many years, Sun Mountain has earned my respect for innovation, consistent leader of the pack quality, and most of all durability. In an era when stuff falls apart more than ever, Sun Mountain is a throwback.

Here’s my story. When I was a younger man, in 1989 to be precise, the concept of the automatic stand bag was still brand new (for those of you under 40, this is the fun feature where you take your bag off your shoulder, the legs deploy and the bag stands. In prehistoric days, we used to lay the bag down on the ground next the green), my best friend bought an early model from Sun Mountain, a company we had never heard of, because the colors were cool. It had an early technology version of automatic legs powered by gravity, not a pedal and spring mechanism like those today. Anyway it worked. After a few years of heavy use, he got bored and moved onto another color scheme. He gave me the bag, my first “nice” golf bag ever. I used it, also heavily, for a few more years, and then seduced my something shinier, I got a new bag and gave it to my friend Joe (real name). Joe still uses that bag today. It doesn’t even look that used. The bag began this journey more than two decades ago.

That’s one reason why I love Sun Mountain.

Since then I have gone through a lot of bags, and inevitably the leg mechanism or the legs themselves break and fail, and the moment I set my bags down on a smooth surface like a hotel lobby floor, the legs flail and it looks like a drunk swimming. Or the zippers or pockets rip. The shoulder straps don’t usually fail, but they have. In short, I’ve used a lot of bags over the years, and now I am back to where it all began, with a Sun Mountain Superlight 3.5. That means it weighs three and a half pounds, about the lightest full-featured bag (lots of pockets, holds a full set of clubs) on the market. This weight is important if you are carrying. Yet it is super strong, super comfy, super everything.

In the interest of full disclosure, I did cross one Sun Mountain bag off my list of personal favorites. About a year ago I decided to try used to switch up a weight class to the 4-pound model, which happens to be the lightest fully divided bag on earth. Fully divided means there is a lined tube for each and every club, and on paper, this is a really good feature few golfers use. It is good because it protects your shafts, which at least in my club cost a lot more than the bag, and in some cases, more than the clubheads. If you are one of the wise golfers who have gone through a real custom fitting process, your shafts are probably the costliest thing you own in the way of golf equipment – and the easiest to damage. Especially if you walk, you might notice constant nicks around the shafts near the heads, and that’s caused by rubbing from the other clubs. I went fully divided to stop this, and as long as you don’t mind a slightly heavier bag that is still as light as most on the market, you might consider the same. Sun Mountain’s fully divided bag is the 4 Five, and it is unique among regular carry bags and you get more protection when playing, more when traveling, more all the time.

So why did I ditch it? I carry a lot of stuff, so maybe its my fault because the pockets on my bags are always bulging, but I found it hard to put the clubs in and take them out, and impossible to keep them in order and thus more difficult than with a regular bag to find the club I needed. In fact, I kept having panic attacks thinking I’d just lost a club, only to find its head hiding under another one. But it was having to lean on the clubs to jam them back into their tubes that did me in and sent me back to the Superlight 3.5. If you carry relatively little in the way of accessories, and have fancy shafts, you might want to give it a try. For me the noble experiment is in the past.

The first thing you’ve got to know when you go carry bag shopping is that golf club companies for the most part do not make bags, even is they do have a big logo slapped on them. My experience is that most major “branded” golf bags will fall apart pretty quickly, the exceptions being Ping and Taylor Made, while I believe alt he other come out of the same crappy Chinese factory. Ping which has a long track record of making durable, light and convenient travel bags, and has long been the favorite of college athletes and professional resort caddies. Taylor Made recently starting actually making bags and I tried one and it is fine, except the water bottle holder is really bizarre, apparently designed for those who hate their water bottle and want to lose it as quickly as possible. They do offer some flashy colors though.

Next: What Travel Gear is in my Bag?