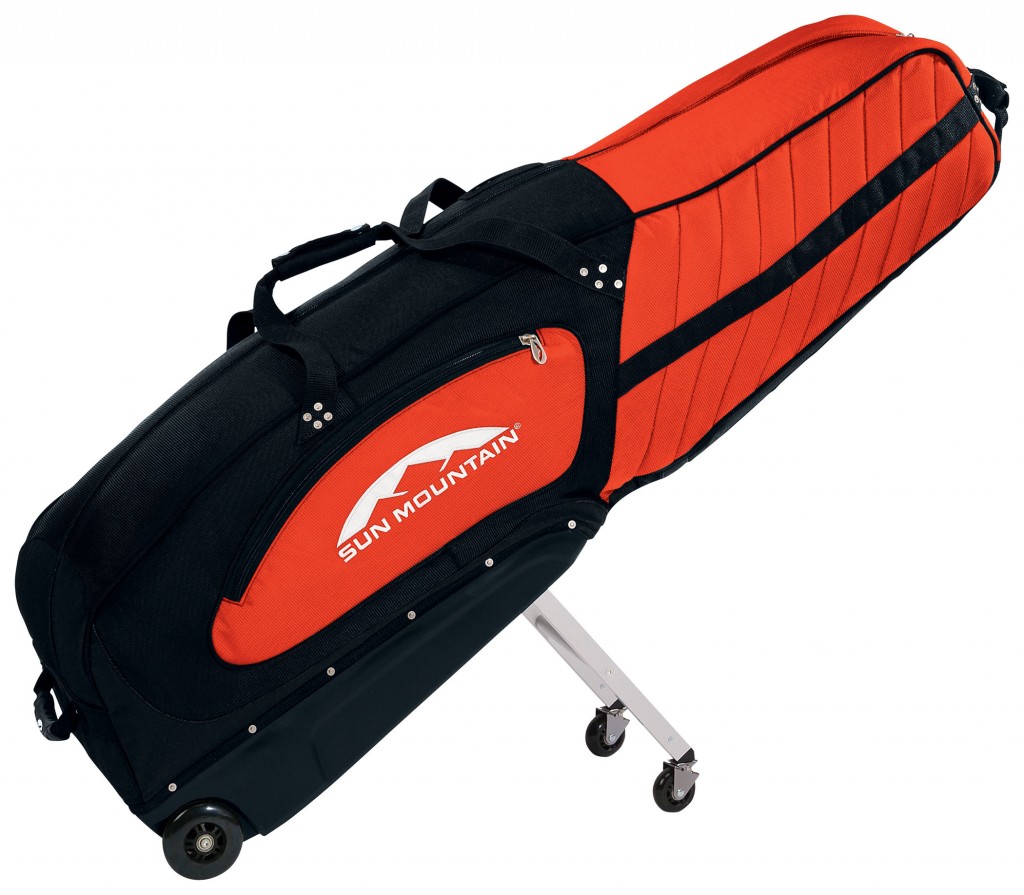 Sun Mountain's ClubGlider, with its cool retractble legs, has become my travel case of choice after years of trying to find the best.

I will start candidly by saying that I have never, ever once used a hard case, those things that look like they should have a tuba in them. But I am increasingly fascinated and think they may make more sense than I once gave them credit for. They look heavy and bulky, but I imagine they are not actually heavy, as hard thin plastic is probably lighter than a lot of the interior skeletons that go into making the so called “soft bags” impervious to damage. One problem with the hard case is that it takes up a huge amount of room, both at home and in the trunk of your rental car. If you go to Europe, there is no chance a twosome, let alone a foursome, could share a car with these. But if you just go to golf resorts door to door, they are probably the easiest to use, certainly the easiest to load with their clamshell design, and the most protective. So I am not against giving hard cases a fair shake. But I spend a lot of time at airline check-in counters, and the vast majority of bags I see are of the soft-sided variety. Someday I will try a hard case, but until then, I will talk about the rolling soft case, with which I have tons of experience with, good and bad

For years I used to use the same bag most Tour pros use, the Club Glove’s “Last Bag.” even though I never liked certain features. After all, the name itself, “Last Bag,” as in the last bag you will ever need, coupled with a lifetime warranty, suggests strength and durability. And I have to admit I was sold on the hype – if the players who travel to tournaments worldwide use it, and trust their clubs to it, why shouldn’t I? My guess is they get it for free. But then again, so did I, and I still stopped using it. But let’s start at the beginning.

The Club Glove lineup looks cool, and is loaded with features you will never use, like the ability to piggyback duffels and other cases on top of your golf bag to roll through the airport. The first issue with this is that the golf bag itself doesn’t roll very well, and this is compounded once you strap other bags to it. Besides you still have to take those bags off and check them or carry them on, so it is just as easy to roll another piece of luggage or have a carry-on over your shoulder. But as I mentioned the bag doesn’t roll very well and that is a huge problem with it. The wheels themselves are heavy duty and great, but the design is poorly balanced and if you do something like put your shoes in one outside pocket, and don’t perfectly counter balance this weight with a couple of dozen balls in the other pocket, the thing keeps flipping on its side while rolling through the airport, and believe me, this gets really old really fast.

The other annoying thing about the Club Glove is how hard it is to get your clubs in and close. Basically, the zipper seems to stop just short of where it would be open enough to work, and it is pain in the ass to zip up and get the clubs in and out of. That is with normal clubs – forget about an extra long shaft or putter. Club Glove does offer the Last Bag in an XXL size which presumably would be easier to deal with in this regarded, but the regular size is already so heavy that with airlines cutting baggage weights I can’t imagine making the limits with a bigger version. As it is I have had to stop carrying some accessories with my clubs.

But none of this is what stopped me from using the bag, which I still have. And none of this is the reason why I will likely never use a Club Glove product again. That reason is the questionable durability and warranty and unquestionably bad customer service. After all, it costs almost three hundred bucks ($289), which ain’t chickenfeed, and Club Glove proudly calls it The Last Bag (as in the last you’ll ever need) and also describes it as burst proof, with a lifetime warranty. Well mine burst, and in a separate incident, the zipper broke. I called to return it and got a horrible runaround, with the customer service rep clearly trying to dissuade me. I finally got the authorization and packed it up (very hard to get that thing in a box) and shipped it for $30 or $40 bucks from UPS, and finally got it back with the hole fixed but not the zipper. I emailed and later wrote and mailed a letter to the company’s president, who I have met, and their pr person (not currently), who I had worked with, and got no responses to any of these. I believe you should get what you pay for, and Club Glove commands a price premium and in exchange supposedly backs its products, but that was not the case for me, so I dropped them. And if it is not the case for me, clearly identifying myself as a golf journalist, I find it hard to believe it will be the case for you.

I still don’t know if there is a perfect travel bag, but in the aftermath of my now-partially fixed Club Glove, I switched to Sun Mountain’s ClubGlider, mainly because I was have been so impressed with their regular carry bags. So far I am much happier This model does three things very well that address all my concerns: it stays balanced while rolling, it is much, much easier to load and unload thanks to a zipper that goes all the way around the head of the clubs so it opens more like a book, and it has an awesome set of retractable legs that make it into a four wheeler. These can be used if you ever have to go longer distances, like between terminals, but it also means that when you are in line at the airport, instead of either kicking your bag every time the line moves three feet, or bending down and pulling it, you simply push it along like a luggage cart. Believe me, people stare in jealousy when I do this. The downside is that the legs make it a bit heavier, and I still always worry about my weight limit. Also, while I haven’t had a problem in the past year I have been using it, the construction does feel a little less heavy duty than the Club Glove did. It also does not hold the clubs as snugly, which doesn’t feel as safe, but I make up for this by padding them with clothes. So far, the ClubGlider and I have been to Europe several times, Canada and Mexico, and all over the US , and I am very happy with it. It comes in three sizes from $230-$299.