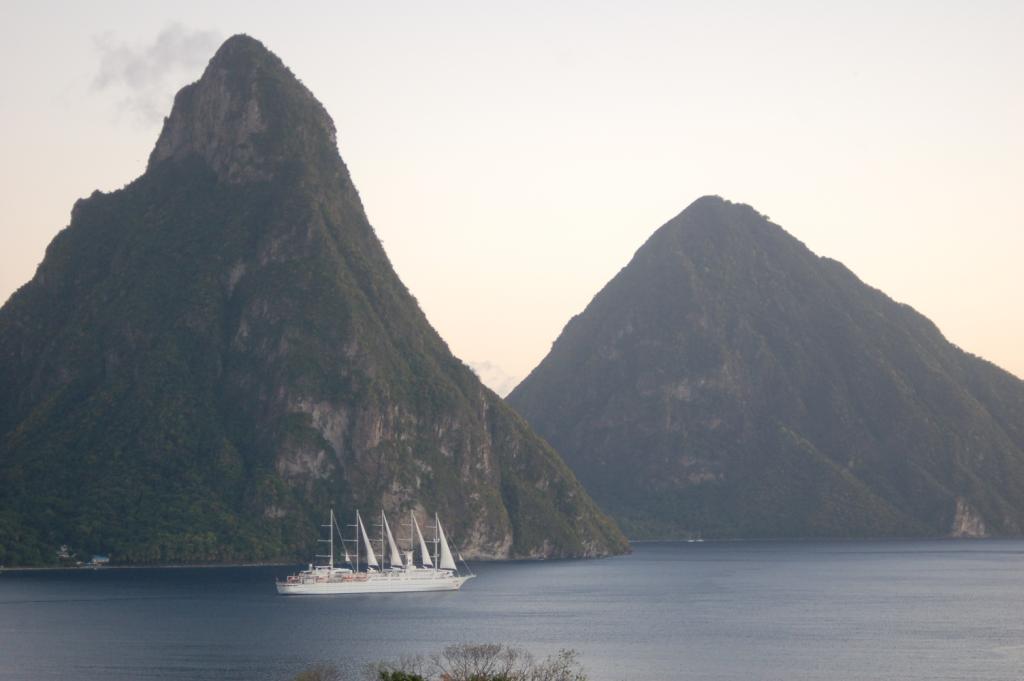 St. Lucia's Pitons are the most spectacular peaks in the Caribbean - and the view every Jade Mountain guest wakes to.

More importantly, Jade Mountain may well be the most unique great hotel anywhere.

The resort’s owner, Nick Troubetzkoy, is an architect, and Jade Mountain is his life’s great work, like Michelangelo’s David. Because it is unique, was virtually impossible to actually construct, and requires an incredibly high level of service to keep going, no chain, not even venerable Four Season or a boutique player like Aman Resorts would build such a thing. In fact, it would be a good bet that no one other than Nick Troubetzkoy would, and for that, I am very grateful.

Jade Mountain is located on St. Lucia, an island so besieged by natural beauty that it is known as the Helen of the West Indies, as in Helen of Troy. St. Lucia is gorgeous from top to bottom, but its most impressive and best known feature are the Pitons, Gros and Petit, two poignant towering mountain peaks, connected at the hip like Siamese twins, one just slightly taller than the other. They are not the highest peaks in the Caribbean, but they are easily the most breathtaking, and not by chance, there is no better view of the Pitons on the entire island than from the spot on which Jade Mountain sits. And because Troubetzkoy loves that view, every single room faces it.

Except that here are no rooms at Jade Mountain.

Or villas. Or suites. Or cabins, bungalows or cottages.

The accommodations here are so bizarrely original that the preferred term is the only one that does them justice: “Infinity Pool Sanctuaries.” 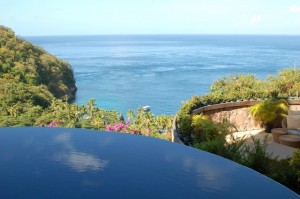 Every one of Jade Mountain's "Sanctuaries" has a private infinity pool with a stunning view of the Pitons and the Caribbean Sea below.

Each Sanctuary is totally unique, but all have three things in common.

First, a private infinity pool terraced into the hillside staring straight at the Pitons. Not just any pool, each is individually mosaiced with special tiles Troubetzkoy chose for the way they reflect light underwater. Each pool is also equipped with chromotherapy lighting guests can adjust to sooth their karma (so are the stunning bathrooms with huge walk in shower towers).

Second, each Sanctuary is completely open to the view with no wall or window to interfere: the view itself is what Troubetzkoy calls the “fourth wall.” As in only a railing between your bed, sofa, pool, chaise lounges and the sea. Some guests are understandably freaked out by the idea that their hotel room is not hermetically sealed, and by the occasional feeling of being watched, but thanks to the ingenious layout of the place, he has thoroughly ensured that no paparazzi can see in from anywhere on the land or sea. There are only two helicopters available on St. Lucia, and the Troubetzkoys know both owners, assuring an absence of fly bys. This security was apparently enough for Sir Patrick Stewart of Star Trek fame and that paparazzi favorite, bad girl singer Amy Winehouse, both of whom had reportedly stayed in my Sanctuary. 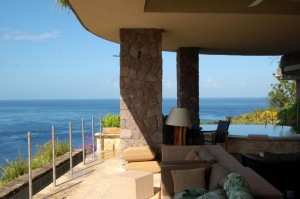 At Jade Mountain, the "Fourth Wall" of every guest room is the Caribbean itself.

Third is that they are insanely decadent, romantic, sensual and comfortable, to the point where one couple set a record for checking in and then literally not emerging from their sanctuary for five days and nights. Not once.

I understand the motivation, given that Jade Mountain makes a spectacular place for a honeymoon, anniversary, tryst, or any kind of romantic escape. It is also an awesome place to recharge the batteries, simply sit around, get some sun or read.

It is not so good for watching TV, since there are none. No telephones either, except the one button cell phone they give you to keep in touch with your personal butler. The place is a fantasy escape from the real world, pure and simple, and while folks who can’t live without fourth walls, flat screens, cell reception and internet are probably the ones who need Jade Mountain most, they shouldn’t come.

The Sanctuaries are all cantilevered into the hillside in way so that none can see into another, each has a stunning view, and the entire hotel, which is quite small, looks like a space ship dropped onto a mountain top. “Floating” is the term most used to describe almost everything about Jade Mountain. The space ship resembles a wedding cake cut in half, since there are only tiers on one side. On the other are an elaborate network of concrete walkways suspended in the air, one connecting the front door of each Sanctuary with the mother ship, and on the top floor sits the Jade Mountain Club, where three meals per day plus cocktails and afternoon tea are served. The roof of the Club doubles as the sun kissed yoga pavilion. 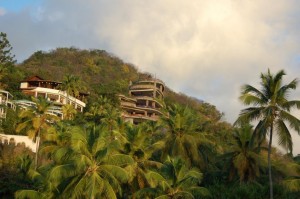 The white buildings on the left are part of the Anse Chatenet sister resort. The terra cotta tower higher up is Jade Mountain, with each level featuring a Sanctuary cantilevered into the hillside.

You see, before he tackled his dream project, the 5-star Jade Mountain, Nick Troubetzkoy built another resort, the solidly 4-star Anse Chastanet, on St. Lucia’s gorgeous beach of the same name. Anse Chastanet has been there for years, and has a great reputation as a very upscale all-inclusive catering to divers, beach lovers and once again, romantics. It sits on the beach directly below Jade Mountain, and guests of the upper resort have access to all the facilities of the lower one, but not vice versa. That means that Jade Mountaineers have all kinds of restaurants with all kinds of cuisines, two sets of yoga classes daily, two spas, a calendar of outdoor fitness classes and nature hikes, elaborate guided sea kayaking excursions, the only purpose-built mountain biking (they call it jungle biking) complex in the entire Caribbean, miles of foot trails with old sugar plantation ruins,  two beaches, every form of watersport imaginable, sunset cocktail cruises, and an onsite PADI 5-Star dive center, one of the best in North America. Then there are hosts of guided of-site activities, like an arduous hike up the Pitons (taller, steeper and especially hotter than it looks!)

None of this comes cheap, as room rates at Jade Mountain soar well over $1000 per night. That makes the optional all-inclusive upgrade a bargain in comparison. Basically once you add it, all your meals – as many as you can fit in your gut – are free, in any of either resort’s restaurants, or as the five-day sequestered guest found out, room service is also covered, along with wine, spirits, and beer. With rooms this awesome, you have to do room service at least few times, because it is hard to leave, but the resort’s other charms are, well, charming. The final selling point are the butlers, who besides being at your beck and call and providing shuttles down to Anse Chastenet and the beach, bring daily surprise snacks and desserts, turn bedding into romantic sculptures, and generally accommodate every whim.

I have been to many of the best and highest rated resorts of all sizes on earth, and Jade Mountain is near the top of the heap, just like its natural setting. What is so special about Jade Mountain is not the best food, or best location, or best service, but can be summed up in one word: