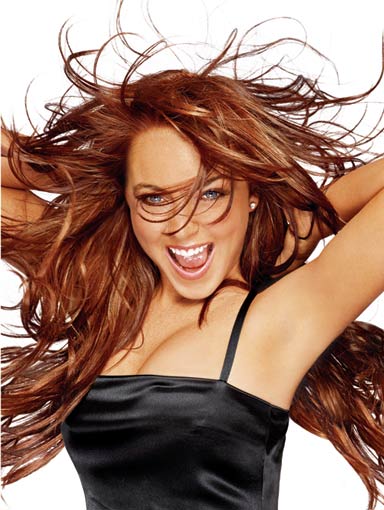 Troubled but talented actress Lindsay Lohan could use a "Big Break." My suggestion is she take on a new addiction, golf, in lieu of old ones. (No copyright found.)

As a judge decides whether to incarcerate bad girl actress Lindsay Lohan or send her to forced rehab, another suggestion comes to mind. How about golf?

Before you snicker, consider this: you haven’t heard much in the news lately about another bad girl, Amy Winehouse. Winehouse is England’s version of Lohan, only more accomplished – and badder. The hybrid soul/jazz/rock/R&B singer has won five Grammys in six nominations, along with about 20 other major awards and more than 50 nominations worldwide. Just 26, the singer has also surpassed Lohan’s bad girl reputation, appearing visibly drunk at the European MTV awards, getting thrown out of bars and hotels, fighting with her ex-husband who later went to jail, struggling with drug and alcohol abuse and even life threatening illness.

So where’s Winehouse today? On the golf course, if you believe the British papers. In 2009 while on a booze fueled vacation romp in the Caribbean’s St. Lucia (I stayed in the same suite she had at the fantastic, over the top Jade Mountain resort, which I blogged about recently), she reportedly tried the game for the first time at the course at the Sandals resort, loved it, and began taking private lessons. A year later, multiple British and global news sources are reporting that she is actively distracting herself from booze and drugs on the golf course, and celebrity websites are featuring headlines such as “Amy Winehouse Plays Golf to Stay Sober,” and “Hot Mess Amy Winehouse Has a New Addiction: Golf.”

Trading old addictions for new is nothing novel, considering the number of people who give up smoking only to replace it with other oral fixations and gain tons of weight. Winehouse follows in the cocaine riddled footsteps of Hall of Fame NFL linebacker Lawrence Taylor, perhaps the most famous advocate of the golf-as-rehab school of therapy, possibly along with singer Alice Cooper, rumored to have used his very good golf game to help kick the bottle.

So if Lindsay is going away for a length of time, how about to a top immersion golf school in place with no nightlife, like Pinehurst, NC; Reynolds Plantation, GA; or Bandon Dunes, Oregon? It’s a win-win: she needs the help and so does golf.