There are many ways to look at it, but they all point to the same conclusion: A century of American dominance in golf is coming to an end.

It’s not just a matter of Germany’s Martin Kaymer having taken over the top spot in the Sony World Rankings this week, or Luke Donald moving into third place, knocking Tiger Woods and Phil Mickelson to fifth and sixth respectively.  (Mickelson has been so relentless about failing to move to number one that he’s practically the Chicago Cubs of the Official World Rankings.)

Golf was Scotland’s game, picked up in England, and brought to the United States in the late 19th century.  The ambassadors of the game who toured here like Harry Vardon and Ted Ray were considered our superiors, until Francis Ouimet punctured the assumption with his playoff victory in the 1913 U.S. Open.

There were challengers.  Gary Player was part of the Big Three with Palmer and Nicklaus, but was definitely the Ringo of the group; Seve Ballesteros showed his brilliance in the majors and at the Ryder Cup but had little interest in being a fixture on the American PGA Tour.

In the 1980s, Greg Norman emerged as a charismatic figure, and Nick Faldo overcame his reputation for failing in the clutch, but Americans still won 29 of 40 majors from 1980-89.

In 1994, the rest-of-the-world contingent won all four majors (Jose Maria Olazabal, Ernie Els, and Nick Price twice), the only time this has happened.  It was the culmination of a five-year period in which Americans took just seven of twenty majors (35%).

But then came Tiger.

The top of the world rankings belonged to Tiger Woods, and despite the multiple majors won by Vijay Singh and Retief Goosen, American golfers took 36 of 52 major championships from 1995 to 2007.  Fourteen of those were Tiger’s, which means that more were won by Americans not named Woods than by the world outside America.

In the last three years, Americans have won just four of twelve, 33%.

It goes beyond the four biggest events, however.  Even during the time from 1990 to ’94, a sizable majority of PGA tournaments (including the WGCs and the majors) were won by American golfers.  Over those five years, U.S.-born golfers won 171 times on the PGA Tour; players from the rest of the world won 53 (24%).

In the last three years, Americans have won 92 PGA Tour events, and non-Americans have won 48 (34%).  Last year, excluding Fall Series events and secondary tournaments held opposite majors and WGCs, the count was America 19, Rest of World 18.

The improvement from abroad is reflected in the official rankings as well.   In the first fifteen years of the rankings, Americans generally occupied more than half of the slots in the Top 30.  That figure has fallen steadily, and today only 9 of the 30 top-ranked golfers are from the U.S.  The graph below shows the year-by-year counts of golfers – American and other – among the top 30 at this point in each season: 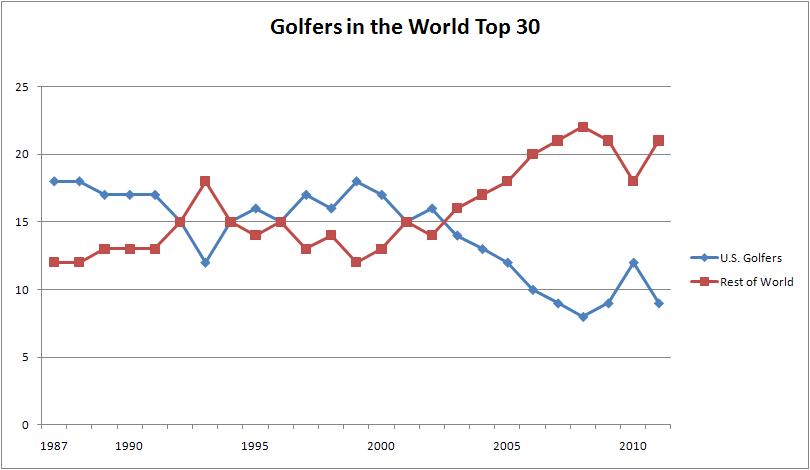 This does not have to be a bad thing for the U.S. Tour.  Greg Norman was a golfer who moved the needle in fan interest and TV ratings – not like Tiger Woods, but the Tiger Effect hadn’t been seen in golf since Frank Chirkinian invented Arnold Palmer.  Rory McIlroy might become that kind of figure, here and elsewhere, or Martin Kaymer, or Ryo Ishikawa, or Jhonny Vegas.

Change isn’t coming; it’s here.  Phil Mickelson is 40.  Tiger is 35 and lost.  Jim Furyk is 40 and has won as many majors as Trevor Immelman.

There’s Dustin Johnson and Rickie Fowler and Bubba Watson and Hunter Mahan.  The future of American golf is not bleak.

But Tiger and Phil are Vardon and Ray now.  It’s a global game, and the world is beating the U.S. at it.