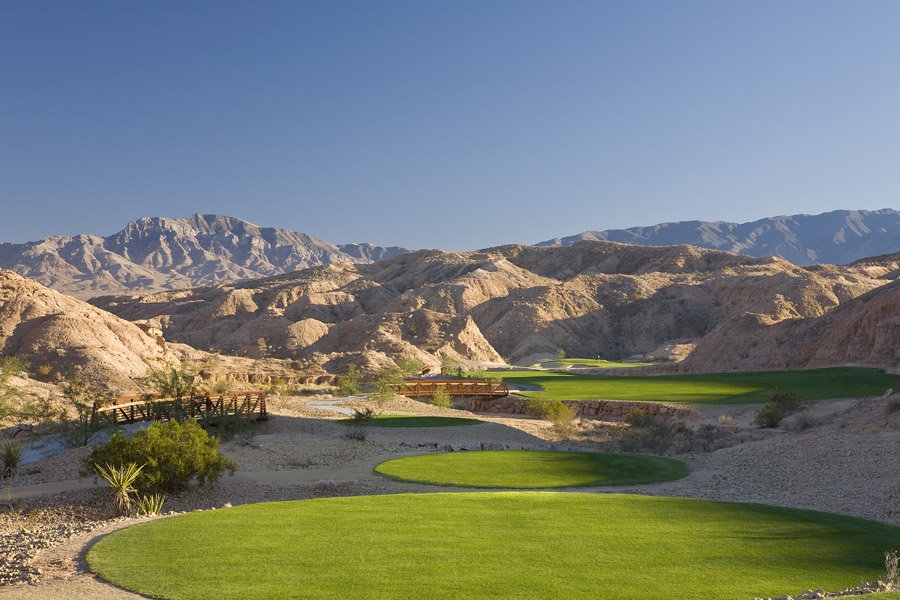 The sixth at Conestoga, with bridges linking the fairway segments.

If you’ve watched the RE/MAX Long Drive championships on ESPN, you’ve caught a glimpse of the area around the Conestoga Golf Club, which occupies a broad vantage point with the whole of Mesquite stretched out below.  The long-drive stadium is part of the Mesquite Sports and Event Complex, just a 50-inch driver’s launch from Conestoga’s 13th green.

Conestoga is a 2010 design by Gary Panks, probably the most prolific architect in the southwest.  His Arizona courses include Grayhawk’s Talon Course, Sedona Golf Resort, the remodeled Phoenix Country Club, and thirty-six holes (and a putting course) at Tonto Verde.  He was inducted into the Arizona Golf Hall of Fame in 2009; Ed Gowan, executive director of the Arizona Golf Association, said of Panks’s creations, “His courses are both memorable and enjoyable for golfers of all skill levels, which is a true testament to his ability and is something that is rarely accomplished by architects.” 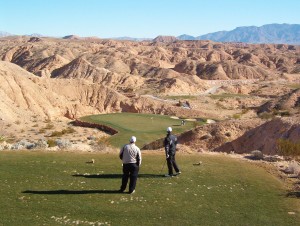 The drama begins at the par-3 second.

Panks has taken advantage of the terrain to provide holes that are visually dramatic yet surprisingly playable.  After a gently uphill opener, the second introduces us to the canyons that will dominate the front nine.  This one-shotter drops 70 feet from the tee to an angled green with a bailout area short and right, a bunker behind, and nothing to the left but a rocky wash.  The yardage is 188 from the tips, with four other choices ranging from 162 down to 94.  The fourth hole features a fairway divided near the 150 mark; the prudent golfer lays up short of the steep dropoff, while the long hitter can risk the 250 carry to the lower level, leaving only a wedge to the green.

The early holes get the best ground, providing both eye candy and strategic interest.  The sixth is a par-5 broken into three distinct “islands” of fairway, separated by rugged washes.  Conservative thinkers will play hopscotch carefully; blasters can bypass the middle segment and let fly at the green. 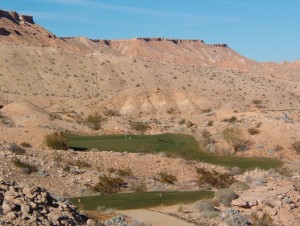 The second nine is much gentler, running along higher ground just below Flat Top Mesa, with sweeping views of Mesquite and the Virgin River mountains behind it.  Still, there are memorable holes here as well, like the long downhill par-4 15th, a beast on the card at 450 yards from the back tees, but much shorter on the ground with the tee elevated some 60 feet and the fairway adding roll from left to right. 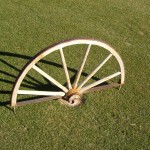 In a playful touch, the 150-yard markers at Conestoga are not posts or in-ground white plates, but half-moon wooden wagon wheels that evoke the course’s namesake frontier vehicles.

Construction continues around the property, with plots being leveled for more homesites besides those flanking the first-built holes, nine through thirteen.  The course is managed by Troon Golf, and exhibits the conditioning and care typical of the company’s approach.

Conestoga Golf Club provides variety, splendor, challenge, and playability in a satisfying package at any length.  It is a reminder that golf can and should be a pleasure as well as a test, a good time spent in good company rather than a grind and ordeal.   Looking back, the same can be said of most of the golf I found in the Mesquite area – enjoyable courses in beautiful surroundings, everything vacation and resort golf should be.