And Ned Dowd, whose sister Nancy recognized the minor-league hockey scene as screenwriter’s gold when she visited her brother in Johnstown, was the model for Ned Braden, the college-educated scorer who won’t fight – but Dowd appears in the film as Oggie Oglethorpe, the uber-goon whose off-screen exploits are a running theme.

But how does Al Pacino figure into things?

All these thoughts – and a hundred other tasty tidbits – come from a recently-released book, The Making of Slap Shot, a behind-the-scenes look at the creation of one of the best, darkest, and certainly most profane sports movies ever made.  Jonathon Jackson, a freelance writer from Ontario, was inspired to dig into the film’s background after attending a Slap Shot cast reunion in conjunction with a charity golf tournament. 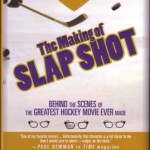 “I went with the intent of doing either a newspaper or a magazine article,” Jackson said.  ”And when I met the people there and started to listen to their stories, it quickly became clear that if I tried to condense everything into a single article I was going to leave out a lot of really cool stuff, so I started immediately to think in broader terms.”

The film starred Paul Newman and was directed by George Roy Hill, who had worked with Newman on Butch Cassidy and the Sundance Kid and The Sting (Hill was nominated for Best Director for both of those, and won for The Sting).  It was written by Nancy Dowd, a thirty-year-old aspiring writer with no previously produced feature films.

Dowd spoke frequently on the phone to her brother, who was playing for the Johnstown (PA) Jets in the rough-and-tumble North American Hockey League.  She became interested in the wild tales he told her, as well as the backdrop of Johnstown, a steel-mill town in the 1970s, when America’s manufacturing sector was beginning to turn to rust.  She left Los Angeles to spend extensive time in Johnstown, absorbing the atmosphere and turning out a script that was quickly the talk of Hollywood.

“The Johnstown Jets won the league championship on the first day of May in 1975,” Jackson recalls, “and seven months later, here they were getting ready to film a movie about it.”

In Dowd’s script the team – now called the Charlestown Chiefs – still wins the championship, but it was not the usual plucky underdog story.  The script was noteworthy for rendering athlete-speak in all its profuse F-bombing and homophobic glory.  Other films had used vulgarity before, but one TV executive counted 176 uses of a particular obscenity in the script — sometimes delivered with great comic effect, other times landing like a punch to the gut.

Dowd had also created some spectacular characters, from the manipulative player-coach, Reggie Dunlop, to the three unforgettable goons in Coke-bottle glasses, the Hanson brothers.  Dunlop was a liar and a charlatan and a nasty pig, capable of sharing sensitive pillow-talk with a woman one night and using it against her husband on ice the next.  The Hansons embodied everything wrong with hockey at the time, fighters with marginal skills who succeeded by dragging the other team down to their level.  Yet somehow Dowd made them cartoonish and almost lovable – they’re innocent furies, spreading mayhem around them because it’s all they know how to do.

George Roy Hill, who was brought into the project by producers Bob Wunsch and Stephen Friedman, fell in love with the script as soon as he saw it.  He thought about Jack Nicholson for the role of Dunlop – Al Pacino had also expressed strong early interest in the script – but barely considered Paul Newman for the role.  He only showed Newman the script at the actor’s insistence.  According to the book, they then had the following conversation:

The film, for reasons related with great warmth in Jackson’s book, became one of Newman’s favorites, and he said often that the role of Reggie Dunlop was “a lot closer to me than I would care to admit,” and noted that his own sense of humor “comes straight out of the toilet. “  There was no question that the experience of filming Slap Shot in Johnstown was the happiest of his career.

“Paul Newman commented at one point that he was especially proud that somewhere along the way you couldn’t tell who the actors were and who the hockey players were, they had meshed so perfectly,” Jackson said.  “They all hung out together, they partied together, they drank together.”

At one point, when it was Newman’s turn to buy the next round of drinks, he went up to the barmaid and found that she was particularly star-struck.  “Do you know who those guys you’re sitting with are?” she said, taking no notice of her customer’s famous blue eyes.  “They’re the Johnstown Jets!”

If you’ve already seen Slap Shot – number one on Maxim’s list of the 100 Greatest Guy Movies Ever Made – I suggest you put on the foil, settle in with Jackson’s entertaining book, and then watch the movie again with renewed appreciation.  And if you’ve never seen Slap Shot, see it, be prepared to laugh and wince at the same time, then repeat as above.