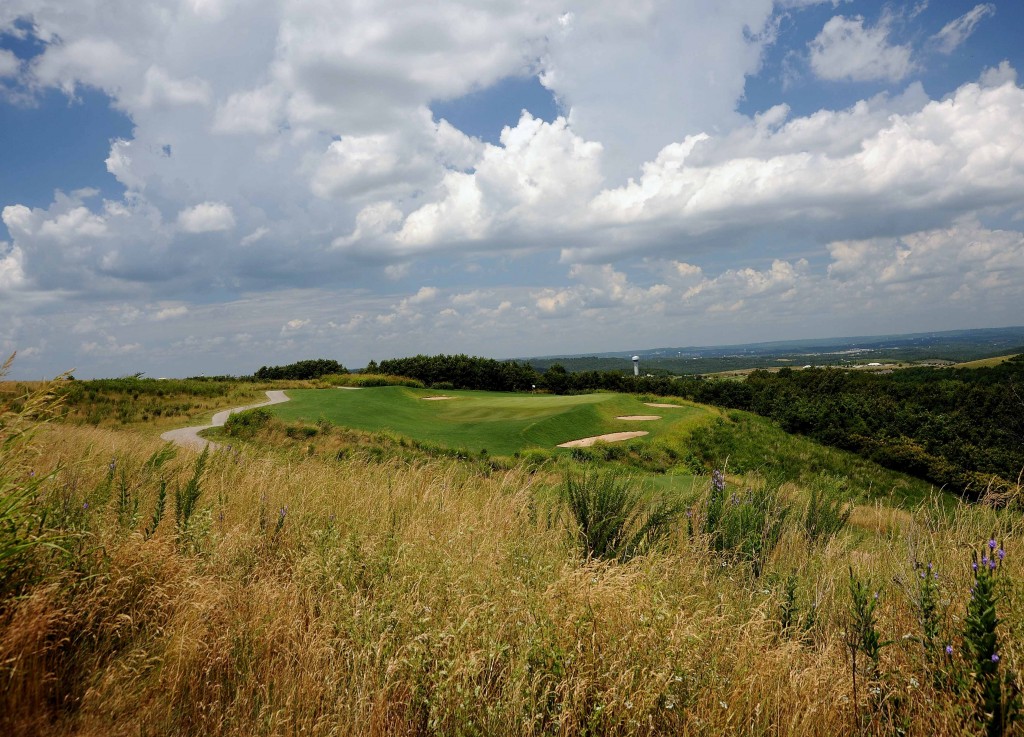 It appears that you can see forever from the par-three 17th at Murder Rock.

This expansive layout sprawls over a Ozark Mountain peak overlooking Branson as well as the neighboring Branson Creek golf course.  Its stately clubhouse stands impressively atop the pinnacle of the ridge and is worth the trip there just to enjoy the views.  The course itself mostly offers wide fairways (with a couple of exceptions) and is intended to be played in the wind.  The outgoing nine meanders well beneath the clubhouse and introduces you to the big scale of the property.  This is a wonderfully pristine layout with usually one or two large imposing bunkers on each hole dictating play.  While most holes feature generous landing areas, the short-par four fourth will have you puckering up.  Be accurate and you may birdie it, but anything wayward, particularly to the left will spell big trouble.

The course is not particularly long at a par-71, 6,727 frame, but when the wind whips over its high and exposed landscape, watch out!  Touring professional John Daley has the course-record of 60 there and the rating/slope is 72.0/129.

There is about 300 feet in elevation changes between the outgoing and incoming nines.  Whereas the front nine plays more in the treed meadows, the back nine rests high above in the wide open mountaintop meadows that are completely exposed to the wind.  As a pubic access course in which many players will have never seen the course, there are many blind tee shots as well as several semi-blind approach ones.  Where this a private club, this would not be an issue, but for many this will be a source of frustration and higher scores. 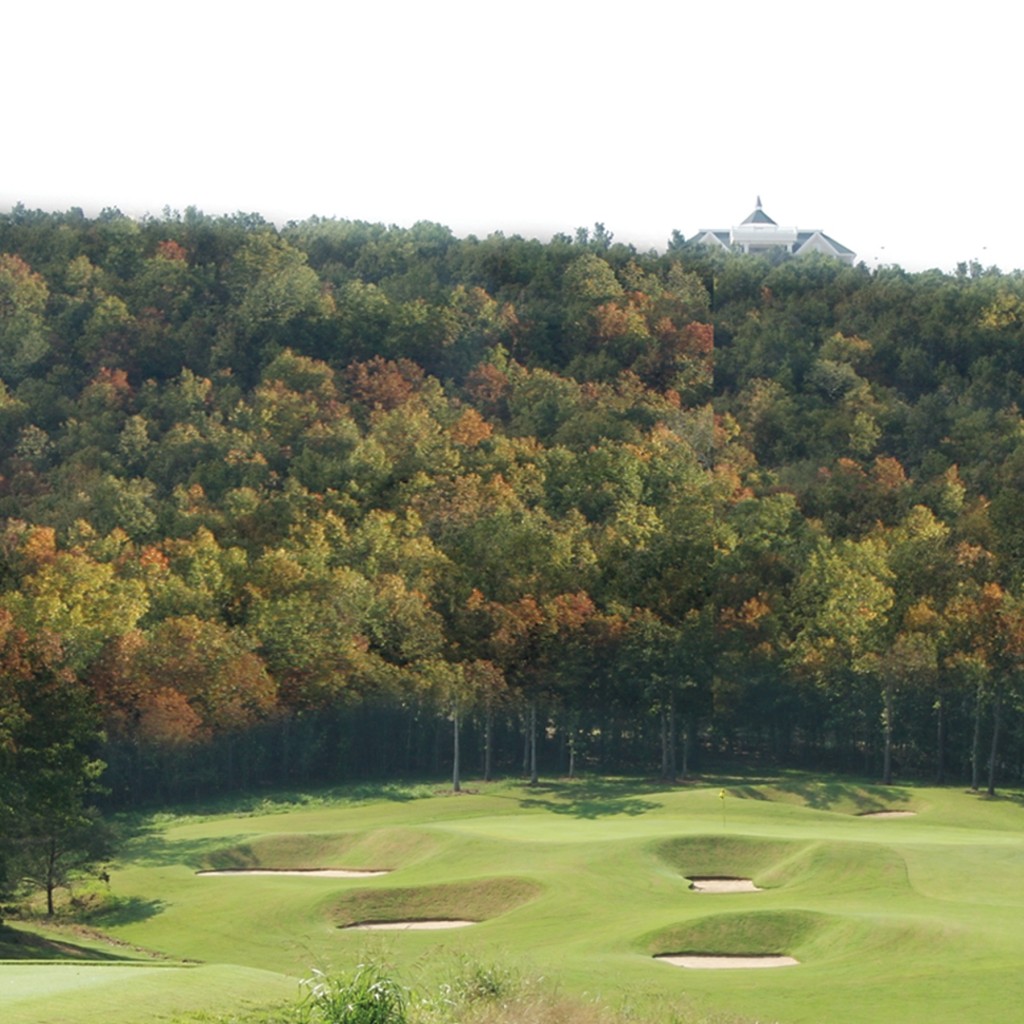 The picturesque 173-yard ninth green sits well far away and well below the clubhouse (at top) and the back nine.

The other criticism I have is that this is “cart ball golf” with more than eight miles of cart paths.  While no one will ever question the location of the clubhouse with is magnificently commanding views, the first tee is far, far removed from the clubhouse area and the trek between the ninth and ten holes is well beyond walking. Interestingly, the final hole finishes well over half a mile from the clubhouse – a space that would easily accommodate three holes.

This criticism aside, I thoroughly enjoyed the golf course and would imagine that most anyone playing there would want at least a second crack at it. The views are spectacular, the golf is solid with some interesting risk-and-reward options presented.  I caught the course before the Bermuda grass greened up (they chose not to overseed with a winter rye) and while the turf played fine, the aesthetics with the dormant Bermuda grass were a bit less attractive than other area courses.

Fagan Rating:  B-. I consider this an easily above average golf course that visitors to the Branson area should want to play.  Obviously, with some valleys and much rock, this was a very challenging and expensive location to build, but “cart golf” and the disjointed distances between the two nines and the abundance of blind shots on a public access course don’t quite warrant a higher rating.

Below is the 14th green complex – a great gambling par-five with great vistas! 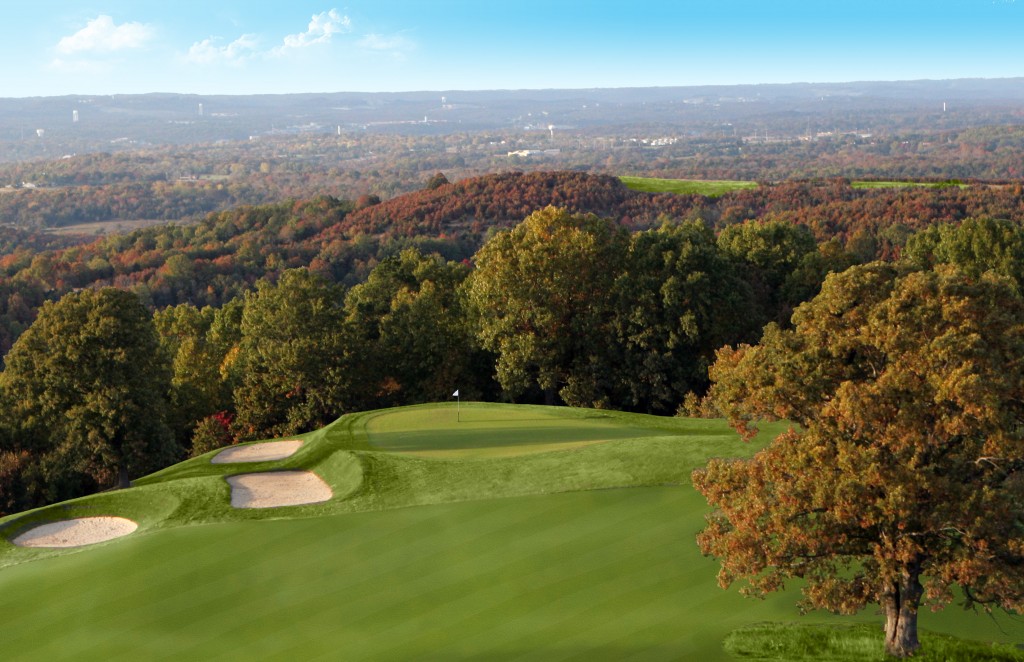