The following is a poem penned by Johnny Carson, a fine playing club professional some years ago in the Philadelphia area where I grew up.  Mr. Carson’s poem speaks a lot of truth. 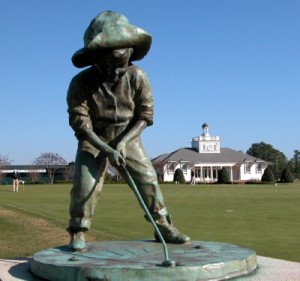 “A Hell of a Putter”

I was striking my drives with end over spin,

My irons were crisp to a well-placed pin.

Yes, my drives were straight and my irons good;

I was getting it on as a good  winner should.

On the back nine, lusting to go for the pin

With accuracy fine, it was just short of a sin –

My grip was firm, my thoughts where I stood,

I really swung hard with my driver of wood;

Confidence gaining and secure on each blow,

I could easily win by four shots or so.

A shot out of trouble to show I’m no klutz,

But alas and alack I have taken three putts.

I’ve hit my shots over bunker and oaks

So at least I will win by one or two strokes.

OH! No! I’ve been beaten, or seem to have been

By someone not Classic, but he put his ball in.

This fellow who beat me said without stutter

“Too bad son, but I’m one helluva putter.”