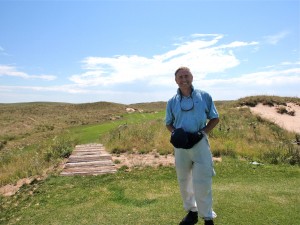 Author Bob Fagan at his “Adopted Home Club” of Ballyneal where conditions are firm, fast, and fun with a bit of brown!

I love the color green and all the implications that the word has for golf.  Indeed, the term “greenkeeper” originally meant “keeper of the green”.  (Notice, greenkeeper does not have an “s” in it.)  The climate of the British Isles is full of rainfall and hence the color green makes perfectly good sense as to the natural conditions one discovers on their courses.

Here, in America, “green” is often an artificial color made possible at considerable expense.  How sad!  In fact, I hate it when my ball picks up a big glob of wet mud and stops well short of my intended target even though there hasn’t been any rainfall, or that I am constantly reaching for a lob wedge because the turf conditions will not permit me to play a chip shot.  The demand for green, lush fairways and putting surfaces has really changed the game, and not for the better in my opinion.  A little more brown is okay, even good for golf.

My love for the game originated in the early 1960s in Eastern Pennsylvania at a time when golf course automatic irrigation was not very prevalent.  What attracted me to the game was the naturalness of the game, the different styles of look and strategy depending upon the indigenous climate and terrain where it was played.  The courses, even the prestigious ones like Pine Valley and Merion, had natural rough and brown or grayish fairways unless we had had a rainy period.  The ground was hard and the ball ran.  Perhaps that doesn’t paint the best picture, but the fact that you had to recognize the contours of the course and play accordingly made for a fascinating challenge, even though the ball would roll further.

That ground game has been lost at many courses in America.  Late in the 60’s, my club (Indian Valley Country Club in Telford, Pa.) installed an automatic irrigation system and literally overnight the course played long and lush.  At first, I thought it was the finest development ever.  In hindsight, I was wrong; it turned out to be a curse.  The fairways narrowed to the reach of the new sprinklers and became as imaginatively shaped as a the Pennsylvania Turnpike.  Many fairway bunkers were effectively taken out of play because they were surrounded by rough and offered no reward for carrying them.  The strategy of different lines of play to a hole disappeared in favor of simply hitting the fairway and then often witnessing the ball plop only a few feet forward out of its pitch mark. The course became too long for at nearly half the membership who could no longer reach reasonable length holes in regulation.  With the long lush grass, you encountered “fliers” all the time.  The “Greenies” among the club leadership, however, were crowing with pride about their new really green, lush golf course and how it played so long and tough.

Golf in America wasn’t always played on lush green carpets unless you encountered a rainy season.  As I alluded to, the ball was played along the ground with the contours adding so much variation and spice to strategy and shot making.  Ever witness what some call “deception bunkers” ten to twenty yards short of a green?   They were not actually designed to deceive as much as provide a risk-reward penalty.  You see, by just carrying those particular bunkers in earlier times, your ball would run along the ground nicely toward the target.  Nowadays, with soft conditions, the ball stops well short of the target with the golfer mistakenly believing the architect positioned the bunker to optically deceive.  While that may have been the case in a few instances and now certainly describes such hazards, it was not the original intent.

Where did we Americans go astray from the engaging strategy and heritage of the British ground game?  Look no further than the Augusta National Golf Club and their year round preparation for the Masters Golf Tournament.  While I love the Masters Tournament as entertainment, no other American course has had such an ill effect upon American golf.  Ironically, the Mackenzie design of Augusta did, in fact, emphasize the ground game. The problem with Augusta National is that what viewers witness each spring on their television screen or at that course is not typical, even for Augusta!  When even Augusta can’t maintain those standards for ten or twelve months, why should the rest of the courses?  It is a fairy tale. 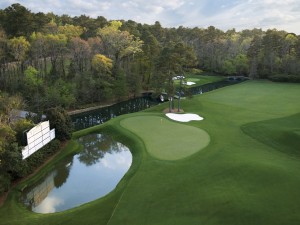 Augusta-istis – Not even Augusta National can sustain Masters’ conditions all year. Photo courtesy of www.nittanywhiteout.com.

First of all, Augusta National is a course that is restricted to very little play half the year, and entirely closed the other half when the fairways are allowed to become brown and gray.  Add to that an essentially unlimited maintenance budget, and you have that “fairy tale of a golf course”.  The Club even adds blue colored dye to make muddy brown Rae’s Creek appear attractive during Masters’ time.  They have installed elaborate heating and subterranean irrigation systems to keep the turf relatively firm and extract excess moisture. Great expense is tended to the blooming azalea and dogwood to hopefully blossom just in time for television, with artificial plantings reportedly placed when Nature does not cooperate.  Just prior to the Masters Tournament each year literally hundreds of golf course superintendents converge on the course to volunteer their services should they be needed.  Unfortunately, Augusta National has become the ideal standard not only for upscale private courses, but the de facto measure for all American golf courses, but with no prayer of sustainability.

Next most influential golfers are either glued to television or fortunate to visit the Masters Tournament.  They return home and then naturally want their Superintendent to imitate Augusta National.  With no similar budget, no similar climate, soil, water, or abundance of other resources, we are pushing our golf course superintendents right up the proverbial wall.  What is right for the Sacramento, Boston, or Houston may not be an Augusta clone regardless of the financial resources.  Yet everyone wants to copy it.  This is an unrealistic ideal, “Augusta-itis” gone bad, expensively so, and it has altered the game to boot!

There are some who maintain, and perhaps correctly so, that Americans judge the quality of a golf course primarily on course conditioning, and now how green it is.  Horrors!  Have we gone that far, from analyzing courses in terms of strategy, a superb routing, shaping and placement of course features to simply assessing how green and manicured a course is as criteria for greatness?  If so, American consumers will be dazzled by any over-watered layout that drains reasonably and is mowed regularly.  Even scarier is the subsequent proposition that the golfing public equates good service with a facility caring enough to make its course green and soft.  That speaks well for the branding of Augusta National and the Masters, but poorly of today’s American golf consumer.  Regardless, that is, and I repeat, an expensive proposition.

This mandate for wall-to-wall greenness and conditioning extracts a toll in higher green fees as golfers must pay a premium price as superintendents struggle with nature and reality.  Cutting and maintaining thick fairway lawns and lush watered rough is more expensive.  In days past, a well maintained green and tee with an acceptable fairway was good enough, with or without improving your lies.  Rough was simply that, rough.  If water supply is an issue, this appetite for green compounds that affordability index.  If you have played golf in season in Las Vegas or Phoenix, you know to what I refer.

Not only is golf more expensive, but also “green and soft” is a more difficult challenge for the vast majority of golfers, though a far easier one for the few expert players.  Hard and fast conditions allow the novice to get more distance, which is not a factor for the accomplished player whose ball typically flies over the interesting terrain only to stop quickly on a soft surface.  Many feel that this is the reason behind the decline in shot-making skills among many of today’s better American players.  They simply swing harder and with their improved equipment, their task is often akin to throwing darts and for further distances.  Evidence the recent US Opens at Shinnecock Hills, Pinehurst #2, and Pebble Beach.  They were far more challenging for the pros because the courses played firm and fast.  Soft grasses and deep rough render creativity impossible.  In contrast, the average golfer needs all the distance they can get.

Yes, I am on the side that believes that our courses are already too green, and golf is needlessly becoming too boring and expensive.  The best courses and real golf architectural genius flourish with the ground game, but all become homogenous with an aerial one. Looking forward, our economic models will not sustain wall-to-wall greenness. While we should demand good turf, if we were a little more accepting of occasional brown and gray conditions, we would have not only a more engaging challenge, but likely a more affordable one as well.  Perfect green wall-to-wall turf is not perfect for golf.

P.S.  No golf course superintendent paid me to write this!

7 Responses to “Perfect Green Is Not Perfect Golf!”