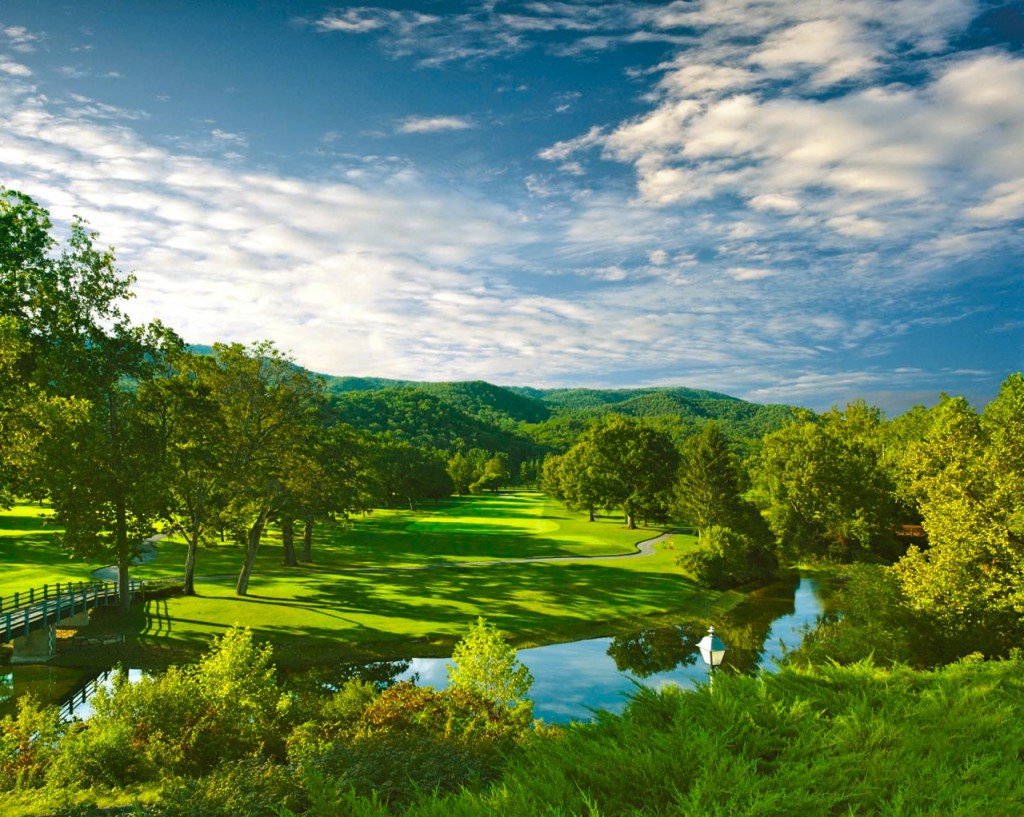 The first tee on The Old White at The Greenbrier is one of the best in golf!

Simply known as The Greenbrier, this facility defines the word “iconic” with regard to American golf resorts. Its history perhaps exceeds all others. As you travel the highways and branch off them, there is no forewarning that such genteel refinery awaits you, but The Greenbrier has been a sporting retreat for the very affluent since 1778 – a National Historic Landmark.

Not only for its golf, but from its dining, rooms, shops, other sporting activities, and now its casino, it embodies luxury, service, and elegance. Situated in the Allegheny Mountains, 26 US Presidents have stayed there and during the Cold War, in the event of an attack it would house the secret underground “Fall Out Bunker” for 1,100 members and staff of the United States Congress. 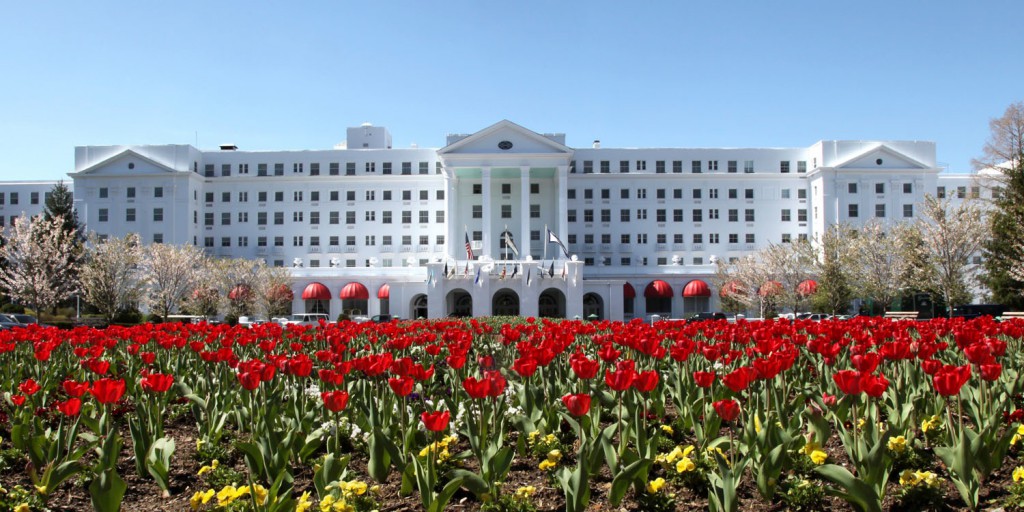 Walking around The Greenbriar facilities is akin to a historical tour. From the Dorothy Draper-designed interiors to the springs that have long been a mecca and the modern sports bar honoring basketball legend and West Virginian Jerry West, there is so much to take in. And while The Greenbrier is the antithesis of Las Vegas and modern style glitz, it does have its own 103,000 square-foot subterranean casino. Billed as “Where Monte Carlo meets Gone With The Wind,” you will find elegance, international cuisine, and boutique shopping in a setting of warm, charming southern hospitality.

My golf review reflects two of its golf courses – The Old White TPC and The Greenbrier. The PGA Tour now annually visits The Old White TPC, which is the oldest course featured on their schedule.

The so-called Father of American Golf, Charles Blair MacDonald designed The Old White back in 1914. Named for The Old White Hotel that stood on the grounds from 1858 to 1922, the course was loving restored to its historical roots in 2006 by golf course architect Lester George. Its history has essentially included the American elite as well as foreign dignitaries. President Woodrow Wilson was one of the first golfers to play there in 1914 while the Duke of Windsor played there in 1919. Virtually every American professional of note has played there as well and the famous Sam Snead was long synonymous with the Resort. In fact, he recorded his final hole-in-one there on the 18th hole in 1995 and also shot an historic 59 there earlier. Today, Tom Watson has taken Snead’s position as the “Golf Professional Emeritus.”

Old White is essentially a flat layout that is nestled in its valley setting bisected by a creek. Macdonald as was his custom would fashion the holes after famous ones in the British Isles and often his copies would be at least as good, if not more intriguing than the originals and this remains true for Old White. The original course measured out to a par 70 and measured a lengthy for its time 6,395 yards. Today the renovated course is a stout 7,287 yards with a slope/rating of 141/75.7. It is amazing that by today’s touring professional standards, it is a somewhat benign challenge at which Stuart Appleby has matched Sam Snead’s record of 59!

For golf course architecture aficionados, you will quickly recognize these famous replicas, namely the Biarritz (3), Redan (8), Eden (15), and Cape (16) and Principal’s Nose at the 9th. Making these originals work as intended, the conditions are typically fairly firm and fast. 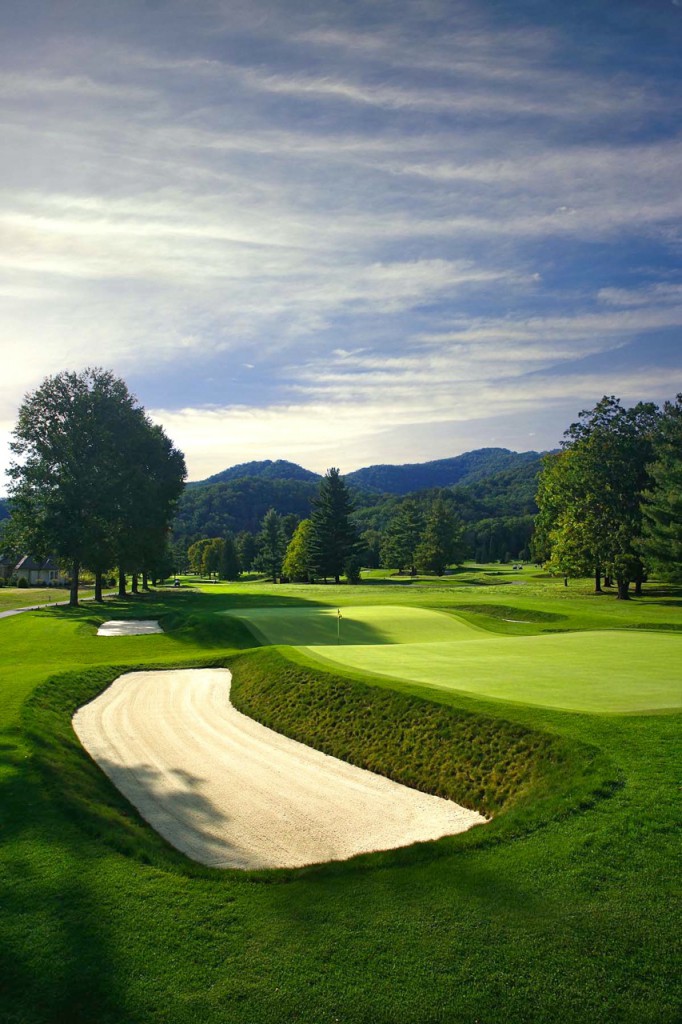 Above is the par-three third hole is a wonderful “Biarritz Hole” with its deep depression bisecting the very long green.

The obvious characteristic of the course is that the bunkers are surrounded by long, wild grass that you hope your balls doesn’t come to rest in. Very penal in nature, your ball is much better situated in the bunkers. The other feature is that Lester George has kept the interesting features in the Macdonald putting surfaces; there’s lot of character!

The other course I visited was The Greenbrier. This course is situated on the site of the original 1924 Seth Raynor design, but Jack Nicklaus subsequently redid it in 1978 and it really reflects the Nicklaus style. This is also a championship ilk layout that hosted the 1979 Ryder only a year after reopening. It remains the only American resort course to host this event and then it held the women’s Solheim Cup in 1994. 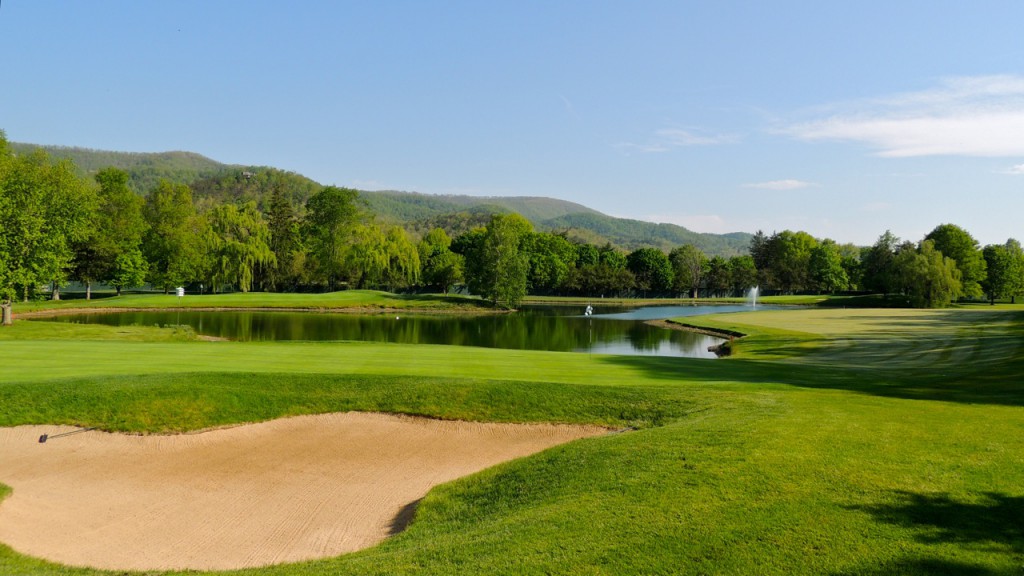 Looking back on the par-four 2nd hole at The Greenbrier Course designed by Jack Nicklaus.

Whereas The Old White features mostly expansive landing areas, the Greenbrier Course is situated among tall wooded avenues and features the signature shallow, terraced putting surfaces that Nicklaus featured at the time. There are many forced carries into the putting surfaces making this for resort guests easily the more difficult of the two courses to score upon in my opinion, though it is considerably shorter at 6,675.

A third golf course called The Meadow Course along with spacious practice facilities really combine for a most attractive golf offering.

From its historical spa and sulphur springs that originally attracted wealthy southerners and its three outstanding resort golf courses to its fine dining, and significant past, The Greenbrier has managed to remain modern and relevant, while maintaining its refined nature and historical significance. It is no accident that the Greenbrier remains “America’s Resort.”

Below is one of my favorite holes on The Old White – the par-four 14th. 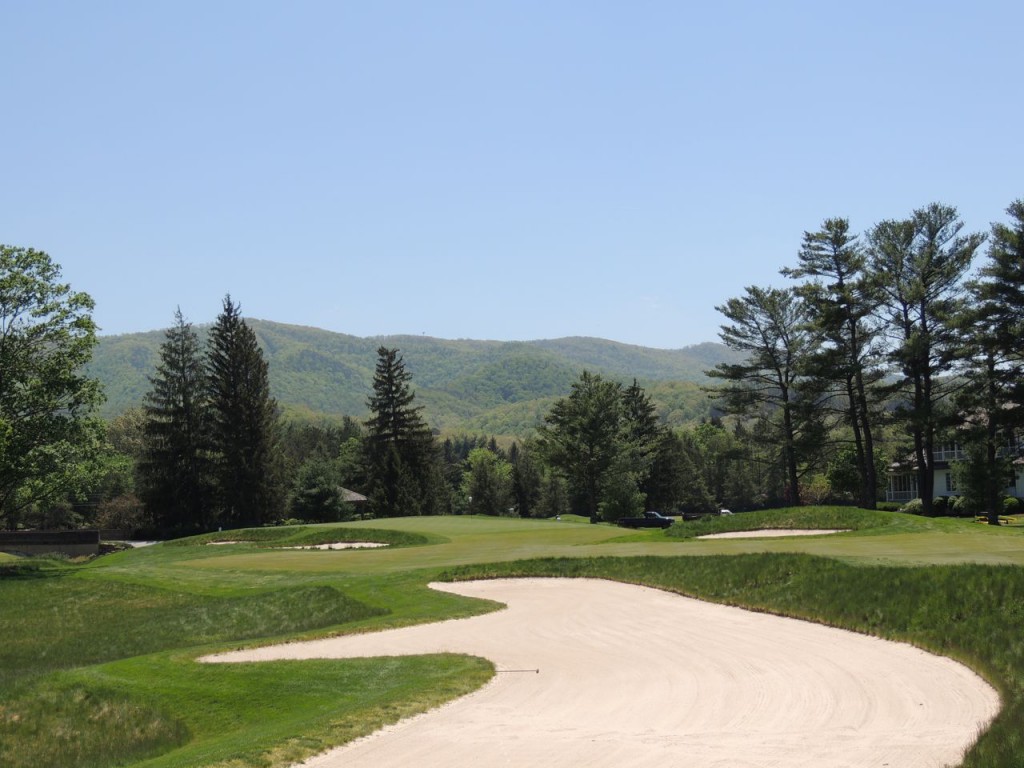